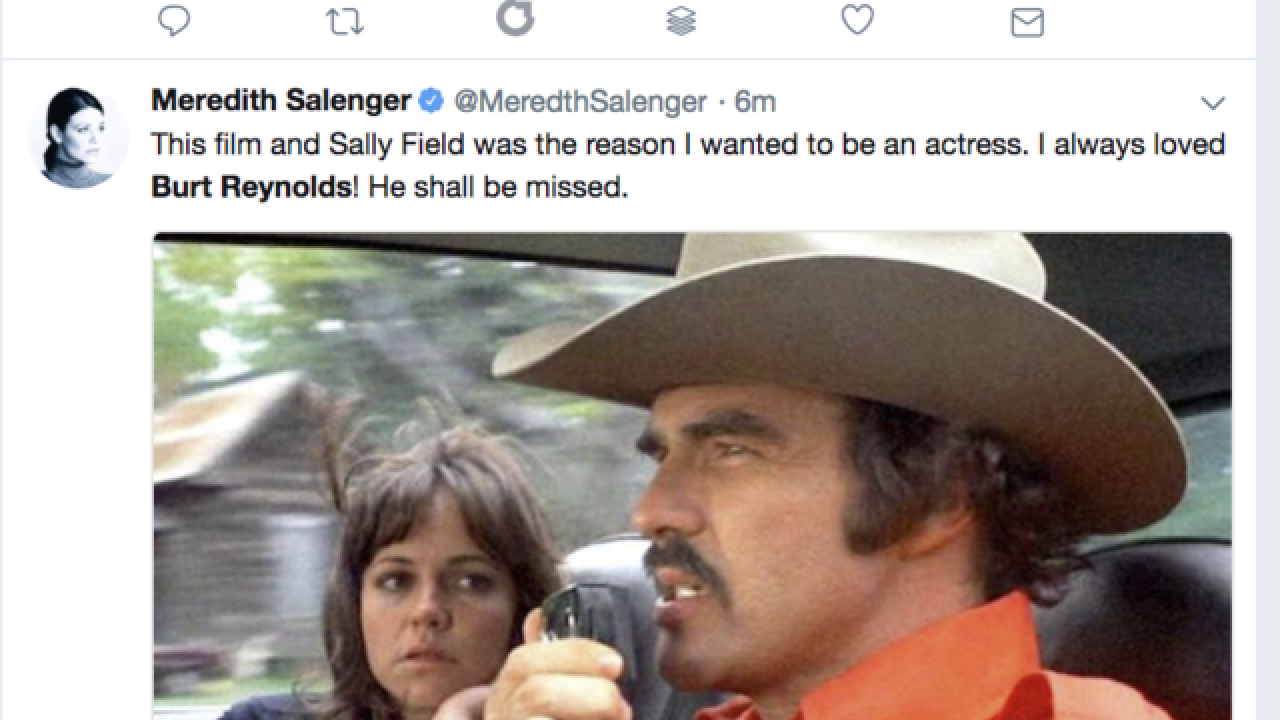 As news of actor Burt Reynolds' death spread across the internet Thursday, celebrities and everyday fans began sharing their condolences on social media.

What a traumatic week. Now today. My good friend Bert Reynolds has passed away. Feeling super emotional right now. Long live The #Legend #Bandit #BurtReynolds you will be missed. pic.twitter.com/JcJZ5VmU1J

Vanilla Ice, who was in the news just a day before after he landed at JFK on a flight from Dubai that contained scores of sick people, shared his condolences on Twitter.

Burt Reynolds was one of my heroes. He was a trailblazer. He showed the way to transition from being an athlete to being the highest paid actor, and he always inspired me. He also had a great sense of humor - check out his Tonight Show clips. My thoughts are with his family.

Arnold Schwarzenegger tweeted, "Burt Reynolds was one of my heroes. He was a trailblazer."

“Stroker Ace was born to race”
Much respect to you Burt Reynolds. RIP pic.twitter.com/w8FlIShmIR

I met Burt Reynolds once in a video store in the 90s before he did “Boogie Nights.” He was by himself and no one seemed to notice him. I said, “I just want to thank you for many hours of entertainment.” He smiled so big and shook my hand and said, “You made my day. Thank you.”

Singer Richard Marx shared a memory from meeting Reynolds in the 1990s.

Burt Reynolds & Clint Eastwood were fired from GUNSMOKE & RAWHIDE at the same time. Burt was told he couldn't act and Clint his neck was too skinny. In the parking lot, Burt said to Clint, "I dunno what you're gonna do, but I'm gonna take acting lessons." #RIPBurtReynolds

A tribute to the great Burt Reynolds with me as a Brucie what a thrill to act with!! pic.twitter.com/gQ9qd6qD5O

Not Burt Reynolds! This is too much. Give him back now!!!!

As THE movie star of my childhood, the Bandit stole our hearts for decades. I always loved how Burt Reynolds worked with his friends as often as he could and then showcased the fun of movie-making in the end credits of his flicks. He was true American icon. Hate to see him go... https://t.co/jaMZjJA4e8

Actor and director Kevin Smith: "He was a true American icon."

Very sad to hearing about the passing of Burt Reynolds. He was a great actor, a philanthropist and a pioneer of the cool mustache. Thank you, Burt. You will be missed. pic.twitter.com/nuuFWMSnJg

TV host Steve Harvey saluted Reynolds for, among other things, being a "pioneer of the cool mustache."

My good friend has started a new journey. Rest in my peace my friend. I’ll never forget the wonderful times we spent together. #BurtReynolds pic.twitter.com/DXzIchYDjl

I will never forget our dinners,laughs & gems you dropped. Meeting you was one of the greater joys of my adult life & artistic career. You were the “Man” then, now & forever in my book. 10-4 Bandit ,you’ve got nothing but open road now - love, WS. the Student. #burtreynolds 🙏🏿 pic.twitter.com/uhdAGjtH8H

Actor Wesley Snipes: "Meeting you was one of the greater joys of my adult life & artistic career."

I love this photo of #BurtReynolds with Michael Jeter and Dom DeLuise. I’m sure they greeted Burt with open arms and had a few laughs. Michael probably copped a feel just to tease Burt for old times sake. #RIPBurtReynolds pic.twitter.com/LDW1brLunN