CEOs of Amazon, Apple, Facebook and Google testifying before Congress 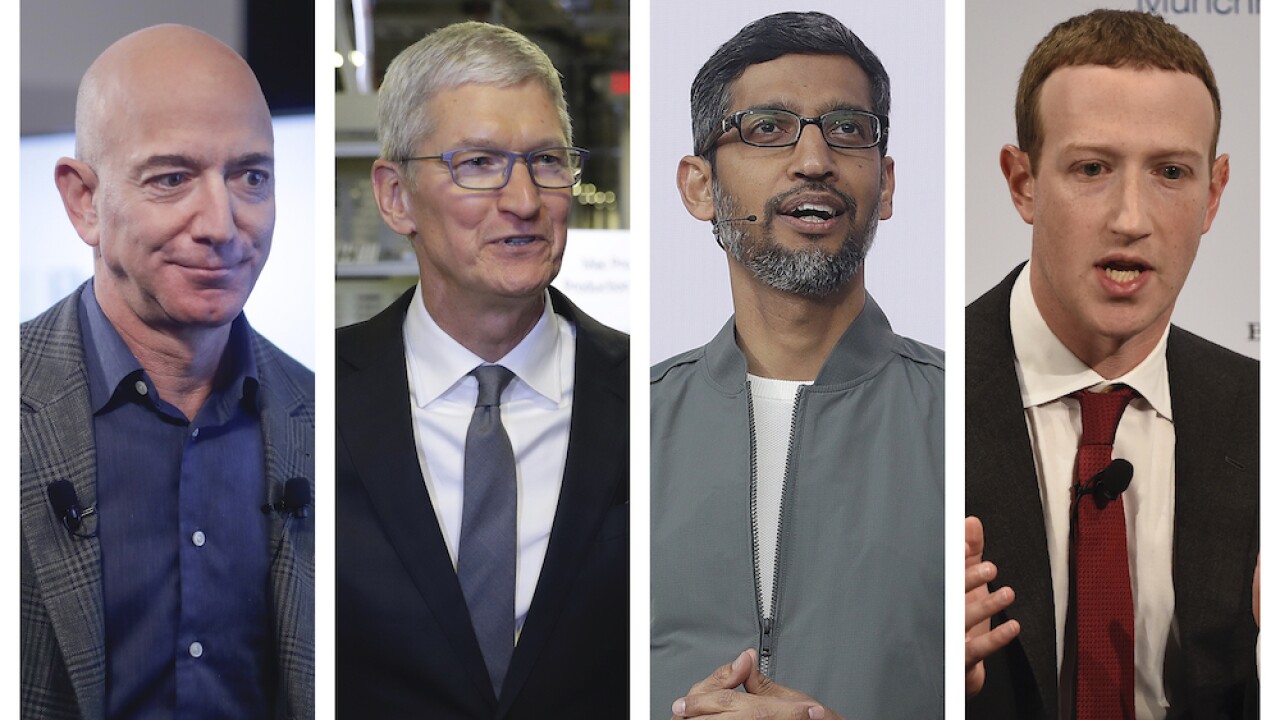 Congress has a rare opportunity Wednesday to consider whether tech giants should be broken up due to antitrust concerns.

The CEOs of Amazon, Google, Apple, and Facebook are testifying remotely in a House Judiciary Committee Hearing starting at noon on Wednesday.

Facebook internal company documents are being deployed against CEO Mark Zuckerberg by lawmakers asserting that the company has gobbled up rivals to squelch competition.

Rep. Jerrold Nadler, the Democrat who heads the House Judiciary Committee, told Zuckerberg at a hearing Wednesday that documents obtained from the company “tell a very disturbing story” of Facebook’s acquisition of the Instagram messaging service.

Zuckerberg responded that Facebook viewed Instagram as both a competitor and a “complement” to Facebook’s services, but also acknowledged that it competed with Facebook on photo-sharing. Some critics of Facebook have called for the company to divest Instagram and its WhatsAPP messaging service.

“We have a policy against using seller specific data to aid our private label business,” said Bezos.“But I can’t guarantee to you that that policy hasn’t been violated.”

With the hearing underway, it's hard to tell who is the most powerful person in the room.

"Google controls nearly all of the internet search in the United States," Rep. David Cicilline, D-Rhode Island, said. "Amazon controls nearly half of all online commerce in the United States. Facebook has approximately 2.7 billion monthly active users across its platforms, and finally, Apple is under increasing scrutiny for abusing its role as both a player and a referee in the App Store."

A year-long congressional investigation is looking for ways to check that power in what experts say will require a new understanding of U.S. competition law.

"(The) major point of these hearings is to move away from a conception of competition law as focusing on the well-being of citizens, as purchasers of goods and services, and to adopt a broader conception that looks at the citizen as an employee — as a resident of a community, as a consumer of news," Willam Kovacic, the former chairman of the Federal Trade Commission said.

The four companies have all denied anti-competitive behavior. Last week, Apple even commissioned a study that found its App Store commission rates were in line with other companies.

"I worry that if you regulate for the sake of regulating it, it has a lot of unintended consequences," said Sundar Pichai, the CEO of Google's parent company, Alphabet. "If you take a technology like artificial intelligence, it will have implications for national security and other important areas of society."

Even as the COVID-19 pandemic has made tech companies more essential and more valuable, they have been facing a growing backlash. Protests have taken place across the country over safety concerns at Amazon warehouses, and advertisers have been boycotting Facebook over the site's failure to properly police hate speech.

"I think they come into the hearing not with a halo, but with great concerns about exactly whose side they are on. And that should be a matter of concern," Kovacic said. "Again, you look at the mood of Congress. You look at how Republicans join Democrats today in scolding these companies. That's a combustible environment for the leading enterprises."

The House investigation is expected to lead to a recommendation for new legislation, perhaps bringing along with it greater scrutiny of tech acquisitions — like Facebook's purchase of WhatsApp and Instagram, and Google's purchase of YouTube and Fitbit. It could also ramp up pressure on other ongoing investigations of large tech companies.