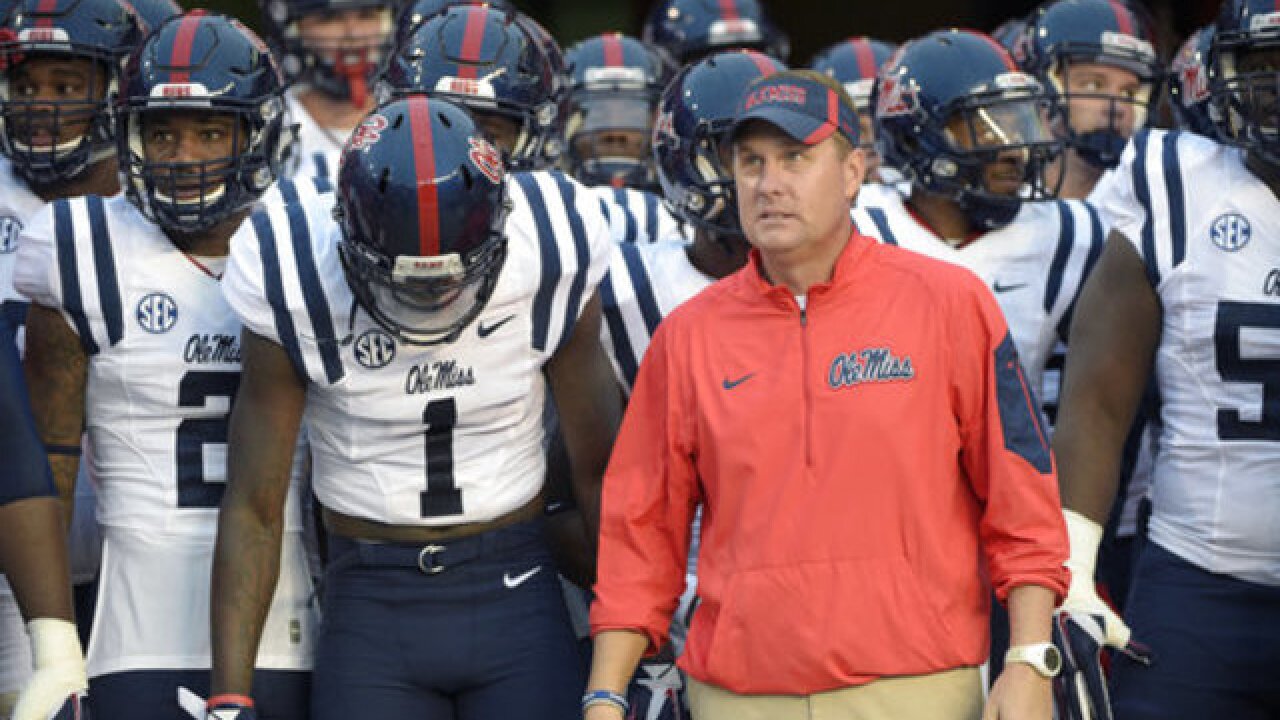 Mississippi football coach Hugh Freeze was at Jackson Country Club on Wednesday night, giving his yearly rah-rah speech about the Rebels' overcoming adversity and getting ready for the season.

Less than 24 hours later, he resigned.

Assistant Matt Luke has been named the interim coach. A press conference was scheduled for late Thursday. A reason for his resignation was not immediately given.

The Rebels had a quick rise under Freeze, recruiting at a high level and reaching an apex with a Sugar Bowl victory over Oklahoma State following the 2015 season.

But an NCAA investigation — alleging 21 charges of academic, booster, and recruiting misconduct — has overshadowed much of that success, especially over the past year. The school has already self-imposed several penalties, including a one-year postseason ban for the upcoming season.

Freeze — who was making more than $5 million per year — had a 39-25 record over five seasons, including a 19-21 mark in the Southeastern Conference.

The 47-year-old Freeze's shocking exit — just a few weeks before preseason camp begins — completes a stunning fall for a coach considered one of the profession's rising stars a few years ago.

Freeze took over after Houston Nutt was fired during a miserable 2011 season that ended with a 2-10 record. Ole Miss immediately improved under Freeze, finishing 7-6 in 2012 and winning the Birmingham Bowl.

The Rebels continued to surge on the field and on the recruiting trail over the next several seasons. They signed some of the nation's top recruits in 2013, including defensive lineman Robert Nkemdiche, receiver Laquon Treadwell and offensive lineman Laremy Tunsil. They helped push the program to eight wins in 2013, nine in '14 and a 10-3 record in '15.

But Ole Miss' newfound ability to recruit at a high level drew the attention of the NCAA, which was already investigating the school for a handful of violations that occurred during Nutt's tenure.

The school has received two Notice of Allegations letters from the NCAA over the past two years. The first alleged 13 rules violations, including nine that were classified as Level I, which the governing body deems the most serious.

But the case expanded in April 2016 after Tunsil became the story of the NFL draft after a bizarre video of him smoking from a gas mask-bong contraption was posted on his Twitter account just before the selections began.

Though the NCAA didn't appear to find much from that particular exchange, the governing body did reopen its investigation, sending a second NOA earlier this year that expanded the case to 21 allegations, including 17 that are Level I.

Freeze, a north Mississippi native, had an unlikely rise to major college coaching, spending about a decade as a successful high school coach in Memphis, Tennessee, before landing a job at Ole Miss in the mid-2000s under Ed Orgeron. After Orgeron was fired in 2007, Freeze became the head coach at Lambuth, a tiny NAIA school in western Tennessee.

He became Arkansas State's offensive coordinator in 2010 and was promoted to head coach in 2011, leading the Red Wolves to a Sun Belt Conference title before being hired at Ole Miss.

Freeze's specialty was on offense and the Rebels were especially efficient on that side of the ball. Behind quarterbacks like Bo Wallace and Chad Kelly, Ole Miss was consistently one of the best schools in the SEC through the air.