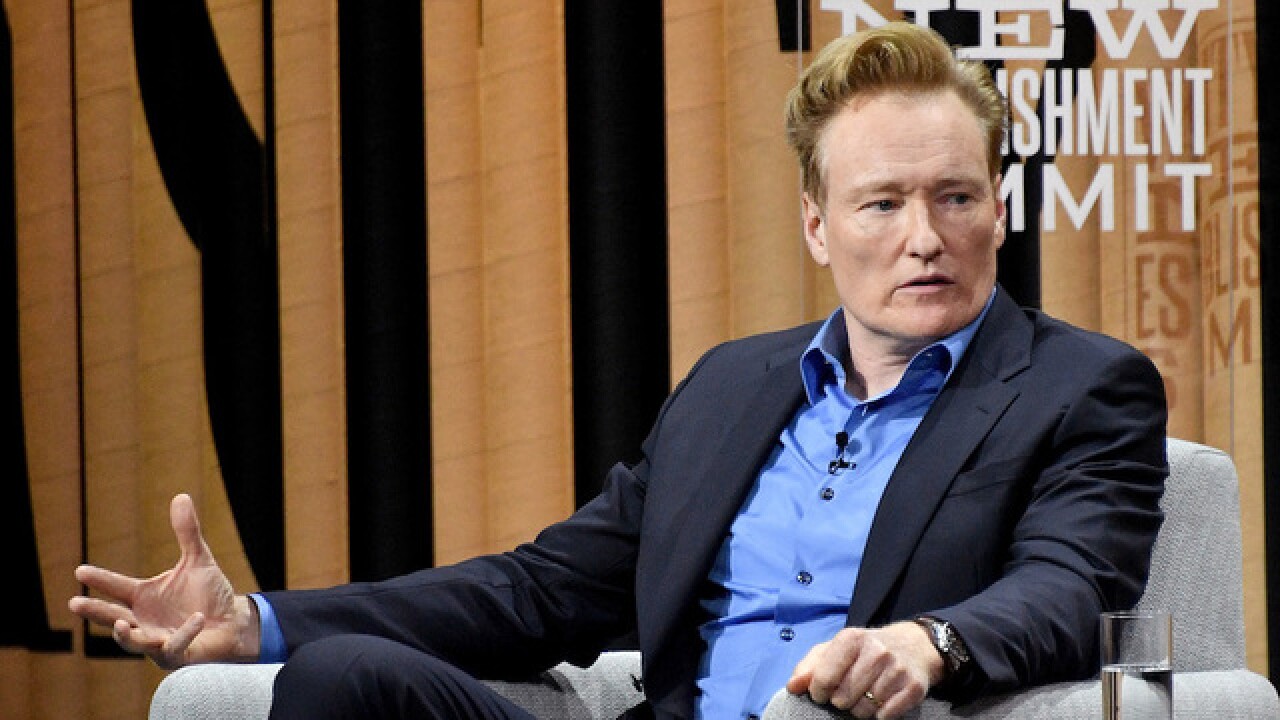 Mike Windle
<p>Television host, Conan O'Brien, speaks onstage during "Our Brands, Ourselves" at the Vanity Fair New Establishment Summit at Yerba Buena Center for the Arts on October 19, 2016 in San Francisco, California.</p>

LOS ANGELES (AP) — What do Caitlyn Jenner, Tom Brady and the Washington Monument have in common?

They're all subjects of punchlines Conan O'Brien is accused of ripping off — and that's no joke.

O'Brien lost an effort to toss out a federal copyright infringement lawsuit in San Diego last week, potentially setting up a novel trial over comic creativity and the value of laughter.

Robert Alexander Kaseberg said he posted several jokes online that the late-night comedian repeated almost verbatim later that day or the next on his "Conan" show on TBS.

"The laughter stopped in late 2014 and early 2015, at least for a spell, when (Kaseberg) began to notice similarities between his posts and several of the jokes used in the late-night television show Conan's monologues," U.S. District Judge Janis Sammartino said in a ruling that allows the lawsuit to proceed.

Kaseberg has written for various publications and had more than 1,000 of his jokes told by Jay Leno, an archrival of O'Brien.

The judge dismissed allegations over two jokes Kaseberg claimed were originals, but she allowed the lawsuit to go forward on three others, saying the law provides "thin copyright protection" for those.

"This is a victory for comedy writers, especially lesser known writers," Kaseberg's attorney Jayson Lorenzo said. "Their works are protected, and you can't use someone else's material, no matter who you are, without facing liability."

One of Kaseberg's jokes was about the New England Patriots' 2015 Super Bowl victory that followed what was widely considered one of the worst coaching decisions in sports history by the Seattle Seahawks. O'Brien's monologue the next day included a very similar setup and punchline.

"Tom Brady said he wants to give the truck that he was given as Super Bowl MVP . . . to the guy who won the Super Bowl for the Patriots," O'Brien said. "So Brady's giving his truck to Seahawks coach Pete Carroll."

Another gag followed news that surveyors had found the Washington Monument was 10 inches shorter. Both men attributed it to cold weather and "shrinkage."

Comedians have been accused of ripping off each other's material as long as chickens have been crossing the proverbial road.

Milton Berle, dubbed the "Thief of Bad Gags," even made light of it, saying of a fellow comic's routine, "I laughed so hard I nearly dropped my pencil."

While accusations of thefts fly, they don't usually end up in court, said Dotan Oliar, a law professor at the University of Virginia.

After Joe Rogan accused Carlos Mencia of plagiarism onstage at the Comedy Store in Los Angeles in a confrontation captured on video, Oliar and a colleague wondered why such accusations didn't lead to litigation.

They found that comedy doesn't pay well — unless you're someone like O'Brien with deep pockets and a production company and network behind him that can also be sued.

It's difficult to prove someone intentionally stole a joke or put a price on a punchline, he said. Disputes are generally settled backstage — usually amicably.

Digital time stamps, however, may help the underdog. The lawsuit compares Kaseberg's tweets and blog posts with the timing of emails from O'Brien's writers later the same days.

"The problem used to be that if you're not famous and someone else was telling your joke, they would think you ... are the thief instead of the victim," Oliar said. "Famous comedians could easily steal jokes with impunity. Now technology can help the novice comedian."

The lawsuit names O'Brien, his production company, Turner Broadcasting System, Time Warner Inc., and the executive producer and head writer of the show.

They have denied the claims and said the material was original. Their lawyers didn't immediately respond to a request for comment.