Convalescent plasma being used as treatment for COVID-19, FDA issued emergency use authorization 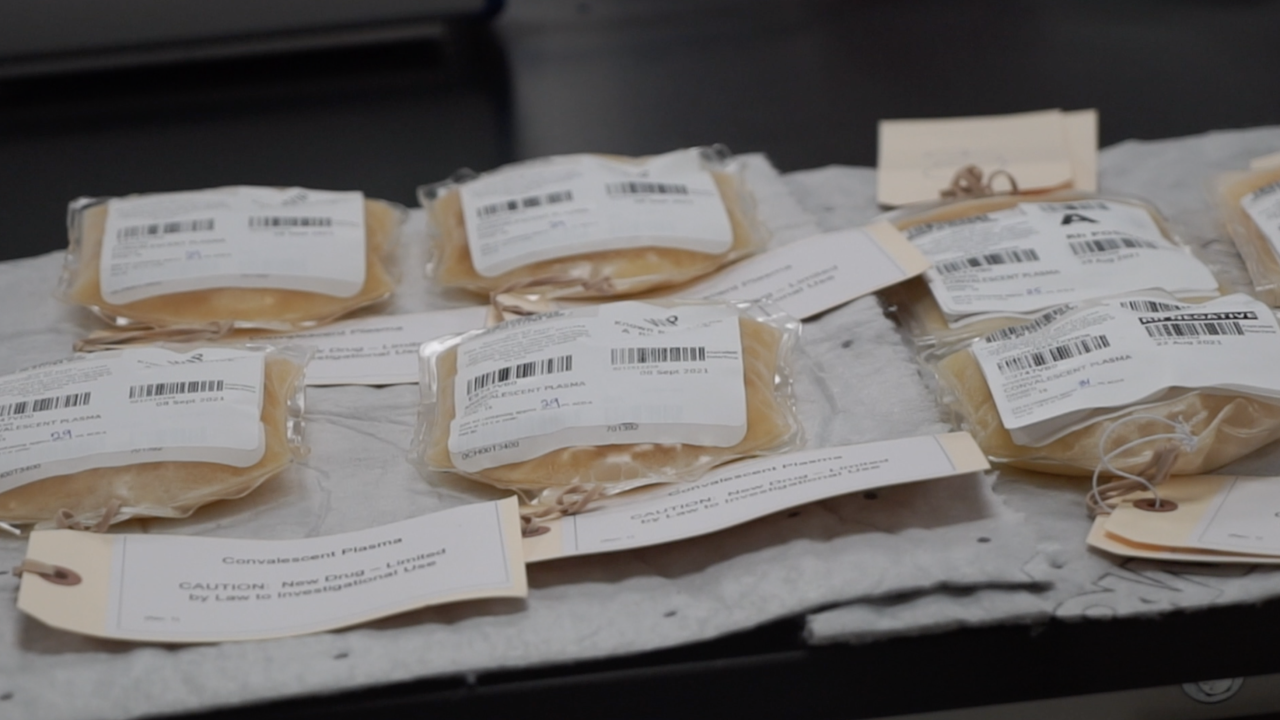 Convalescent plasma being used as treatment for COVID-19, FDA issued emergency use authorization

“This will be my third time donating.” Lutkin had COVID-19 back in April. “I was pretty sick for about four or five days,” she said. Now she comes infrequently to donate plasma. “It doesn't hurt. It doesn't feel bad. It’s fairly easy.”

Plasma is just one of the tools used in fighting coronavirus. As it gets donated, it goes to COVID patients.

“You could help as many as five patients with one sitting,” Liz Lambert, Vitalant spokesperson, said.

Vitalant is a nonprofit that collects blood for about 1,000 hospitals across the country.

“Right now, there's an emergency need for convalescent plasma as we anticipate more patients will be getting that treatment, or hospitals will be wanting to use that treatment,” Lambert said.

The FDA issued an emergency use authorization for convalescent plasma as a potential COVID-19 treatment in late August. Convalescent plasma is taken from the blood of someone who’s already contracted a particular illness, in this case, COVID-19.

This isn’t the first time in history; it’s been used to treat a virus.

“Convalescent plasma is a very historic and crude way of conferring so-called passive immunity to patients who have a viral or bacterial disease,” Doctor Phil Stahel, Chief Medical Officer at the Medical Center of Aurora, said.

So far, this center has treated 100 COVID-19 patients using this method.

“Studies have shown that convalescent plasma is very safe,” he said. “It has been recently used for Ebola and other viral diseases for which we do not have a vaccination.”

Doctor Stahel said patients they treat who are significantly sick could recover within 24 to 48 hours.

Here’s how it works.
“Antibodies are proteins that we form in our blood that attack antigens once our immune system recognizes them. It takes weeks for these to develop,” Doctor Ralph Vassallo, Chief Medical & Scientific Officer for Vitalant, said.

The antibodies are taken from a recovered patient and put in a patient who recently contracted the disease.

“The idea of convalescent plasma is to give them, in that period, when the patient does not have their immune response, to help neutralize the virus and prevent it from infecting cells in the body,” Doctor Vassallo said. “Convalescent plasma has been used for over 100 years in respiratory infections, including influenza.”

“Whether its blood or convalescent plasma, there is a constant need,” Lambert said.

Vitalant checks every regular blood donor for the antibodies as well, in hopes of identifying more possible donors.

“In the first couple of September, it’s been about 3.6% nationwide,” Dr. Vassallo said.

Those interested in donating convalescent plasma need to meet the same requirements as a blood donor, like being 16 years old or older, and at least 110 pounds.

“It is indeed the first line of defense, and we should treat those patients early. This is for the adult in patients who are severely sick and at risk of getting on a ventilator, which we try to avoid by all means,” Doctor Stahel said.