Democrats fight to win control of the House in 2018 midterms 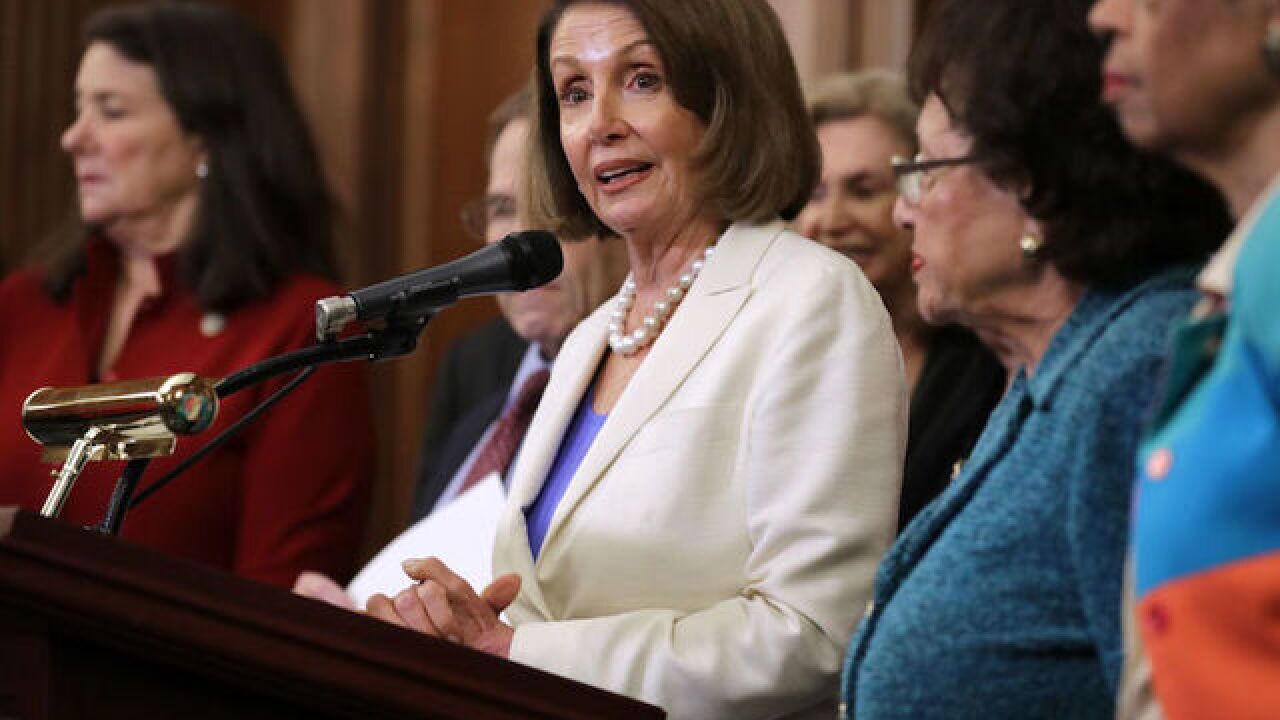 Image copyright 2018 Getty Images. All rights reserved. This material may not be published, broadcast, rewritten, or redistributed.
Chip Somodevilla
<p>House Minority Leader Nancy Pelosi (D-CA) (C) is joined by Democratic members of the House of Representatives to rally support for Dr. Christine Blasey Ford in the Rayburn Room in the U.S. Capitol September 26, 2018 in Washington, DC. </p>

Democrats are hoping to flip the House of Representatives in Tuesday's 2018 midterm elections and Republicans are at serious risk of losing their majority in the lower chamber of Congress.

While a Democratic victory is far from guaranteed, the party has been viewed as a slight favorite to win the House on Election Day. A Democratic win would deal a major blow to President Donald Trump's agenda in Congress and would be a significant victory for Democrats after the party was locked out of power in Washington following the 2016 presidential election.

If Democrats take the House, the party will have more authority and fewer constraints on its ability to exercise oversight of the Trump administration and could launch investigations into the President's finances, including going after his tax returns, as well as ramp up a probe into the possibility that the Trump campaign colluded with the Russian government to win the White House, which Trump has denied.

Discussion about the possibility of impeaching the President is also likely to grow louder in a Democratic-controlled House, despite the fact that Democratic congressional leaders have tried to tamp down on speculation that the party might pursue impeachment -- at least at this point.

If Democrats win the House, attention will quickly shift to the question of who will lead the party. Democratic leader Nancy Pelosi has said she plans to run for House speaker if Democrats flip the House and feels "confident" about it. But Pelosi has also said she views herself as "a transitional figure," fueling speculation about who will one day succeed her and whether she could face a challenge in her bid for the top spot in leadership in a new Congress.

Rep. Tim Ryan of Ohio, who challenged Pelosi unsuccessfully in 2016, is so far the only Democrat who's publicly considering a run against Pelosi, while others are mulling a bid only if Pelosi steps aside or if she were to be defeated in a run for speaker. House Democrats are set to hold their leadership elections the week after Thanksgiving.

On the Republican side, there will be a leadership contest no matter the outcome of Tuesday's midterms as House Speaker Paul Ryan has announced he would not seek re-election. House Majority Leader Kevin McCarthy is viewed as the favorite to succeed Ryan and has already been endorsed by the outgoing speaker. House Majority Whip Steve Scalise may also be interested in climbing the GOP leadership ranks though he has said he would not challenge McCarthy in a race for speaker. GOP House leadership elections are on track to to take the week after the midterm elections.

Rep. Jim Jordan, a co-founder of the House Freedom Caucus -- thought to be the most conservative voting bloc in the House -- has launched his own bid for speaker and is expected to run for leadership even if Democrats win the House. Jordan, often seen as a conservative agitator in the House, is considered a long shot for a leadership post.

Throughout the midterm elections, Republicans have been worried that Democrats would take the House and a so-called "green wave" of money flowed to Democratic candidates in the final weeks before the midterms. Fundraising reports from the third quarter of 2018 cemented those fears as Democrats outraised Republican opponents in competitive House races.

Trump ramped up efforts to campaign on behalf of vulnerable GOP candidates in the run up to the midterms. The President has framed the election as a choice between what he has described as Republican law and order and a Democratic "mob" and spoke extensively about immigration and securing the border in the final days of the fall campaign season. It's unclear whether Trump's rhetoric will help or hurt vulnerable GOP incumbents, but at least some critics feared the push on immigration would energize the conservative base but also possibly turn off moderate or independent voters.

Democrats, meanwhile, prioritized a different message in the midterms and have heavily emphasized promises to safeguard health care for voters, including protecting individuals with pre-existing conditions.