A timeline of the results of key US Senate races 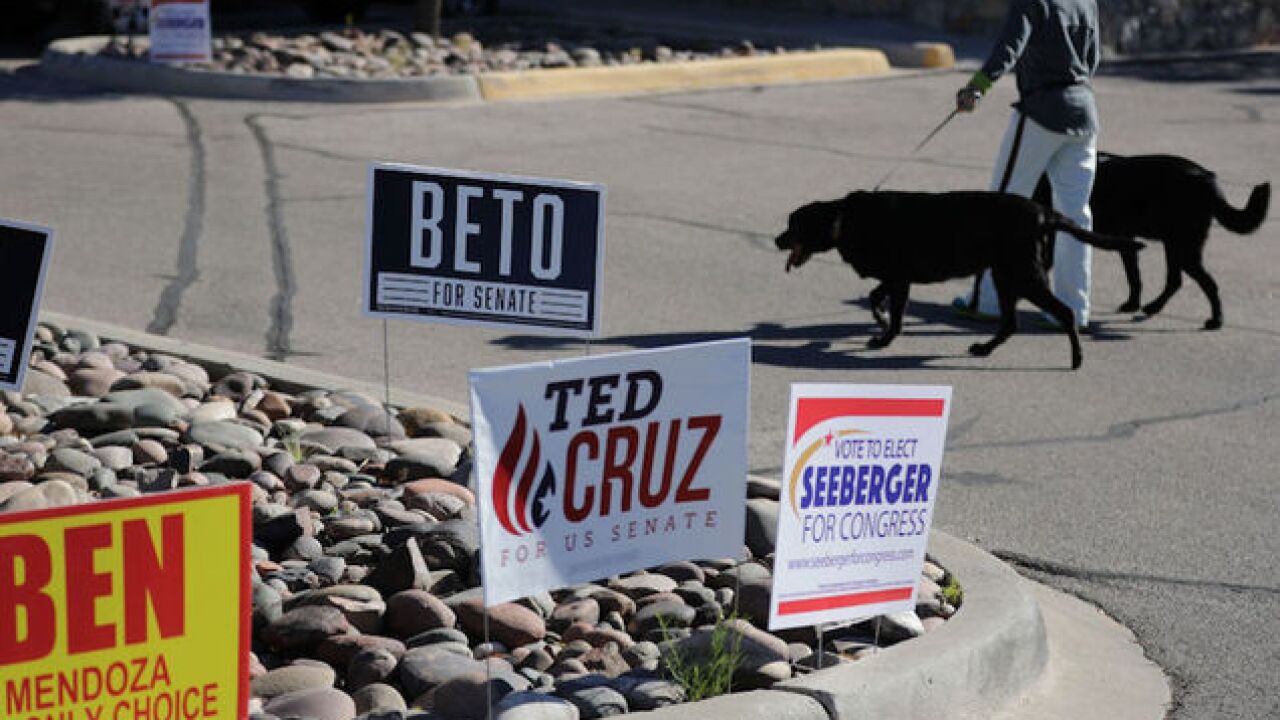 Image copyright 2018 Getty Images. All rights reserved. This material may not be published, broadcast, rewritten, or redistributed.
Chip Somodevilla
<p>A voter heads to the polling place with her dogs at the Grover and Carolyn Stewart Family Life Center Election Day November 06, 2018 in El Paso, Texas. In Texas, Rep. Beto O'Rourke (D-TX) is in a surprisingly tight contest against incumbent Sen. Ted Cruz (R-TX) for one of the state's U.S. Senate seats. </p>

Republicans will keep control of the U.S. Senate following midterm elections on Tuesday.

The GOP made good on a favorable map in the Senate and increased its majority after an acerbic midterm election that enshrined America's deep political divides and shaped a highly contentious battleground for the stirring 2020 presidential race.

Republicans moved to close off the Democratic path to a Senate majority when challenger Mike Braun beat Indiana Sen. Joe Donnelly, and Marsha Blackburn won in Tennessee, according to CNN projections. Republicans later picked up their second Democratic Senate seat of the night when Kevin Cramer beat one Sen. Heidi Heitkamp in North Dakota, CNN projected.

There was a blow for Democratic morale as Texas Sen. Ted Cruz held off a stronger than expected challenge from Beto O'Rourke to win a second term, CNN projected. In one result that did not come as a surprise, former Republican presidential nominee Mitt Romney won a Senate seat in Utah.

Below is a timeline of how more races unfolded Tuesday evening:

Cruz made his name in Washington as a right-wing crusader against Obamacare. That elevated him with the GOP's base during his failed 2016 bid for the party's presidential nomination -—but also made him a top Democratic target.

PHOTOS: Election Day across the U.S.

Another reason progressive activists were deeply invested in the race: As more Latinos register to vote, Democrats believe the state that hasn't elected a member of their party in 24 years will move leftward and eventually become competitive. It's part of a Sun Belt shift that the left hopes could also remake the political landscapes of Georgia and Arizona and eventually lock in Colorado, New Mexico and Nevada as solidly Democratic.

The Democrats' path to a Senate majority is rapidly closing after Republicans took a Democratic-held seat in Indiana and easily fended off a Democratic challenge in Tennessee.

With Democratic Sen. Bill Nelson narrowly trailing in Florida, the party's opportunities to net the two seats they need to take Senate control are evaporating.

Arizona and Nevada are two GOP-held seats Democrats could win — but they might need those just to make up for earlier losses.

9:45 PM EASTERN — UPDATE:
Rep. Marsha Blackburn will win the race to represent Tennessee in the US Senate, CNN can project, outlasting a challenge from former Gov. Phil Bredesen, a Democrat who looked to run against his party to win in a state President Donald Trump won by 26 percentage points in 2016.

Blackburn, a conservative lawmaker closely tied to the President, looked to nationalize the Senate race as much as possible, hoping to tap into the same conservatism that elected Trump in order to blunt some goodwill Bredesen had built up during his two terms as governor. Trump visited the state three times. Blackburn will be the first female senator to represent her state.

Democrats had hoped to pick up Tennessee as part of a narrow path to retaking the Senate.

Marsha Blackburn (R) is the winner over Phil Bredesen (D) in Tennessee.

Manchin keeps in Democratic hands a seat in a state that voted overwhelmingly for President Donald Trump. West Virginia was long seen as a top Republican target for one reason: Trump won there by 42 percentage points in 2016.

The state, once a Democratic stronghold, has become so heavily Republican that the sitting governor, Jim Justice, switched to the GOP last year.

Manchin, though, built a reputation as one of the Senate's most conservative Democrats. He broke with the rest of the party to vote to confirm Brett Kavanaugh to the Supreme Court, though he waited to announce his position until Kavanaugh's confirmation was already guaranteed.

9 PM EASTERN — UPDATE:
Mike Braun (R) is the winner over Joe Donnelly (D) for the open US Senate seat in Indiana, according to WRTV television station in Indianapolis. Braun was heavily supported by President Donald Trump. He is businessman and former legislator.

Marsha Blackburn (R) is projected to win over Phil Bredesen (D) in Tennessee.

In Pennsylvania, Bob Casey (D) is the projected winner over Lou Barletta (R).

Some polling places in Texas and Georgia will stay open longer, per a judge's rule.

Florida's Senate race of Rick Scott (R) and Bill Nelson (D) remains too close to call with 85% of precincts reporting.

8:10 PM EASTERN — UPDATE:
The Democrats have taken an early lead in key Senate races. They are projected to keep Senate seats in Connecticut, Delaware, Maryland, Massachusetts, Ohio and Rhode Island.

The Florida Senate race has been very tight as the results have come in throughout the evening and the race is too close to call.

In the House of Representative races, the Dems took their first House seat from Republicans as Jennifer Wexton was projected as the winner over Barbara Comstock in the Virginia-10 race.

The first polls closed at 6 p.m. on the East Coast.

PHOTOS: Voter turnout across the nation