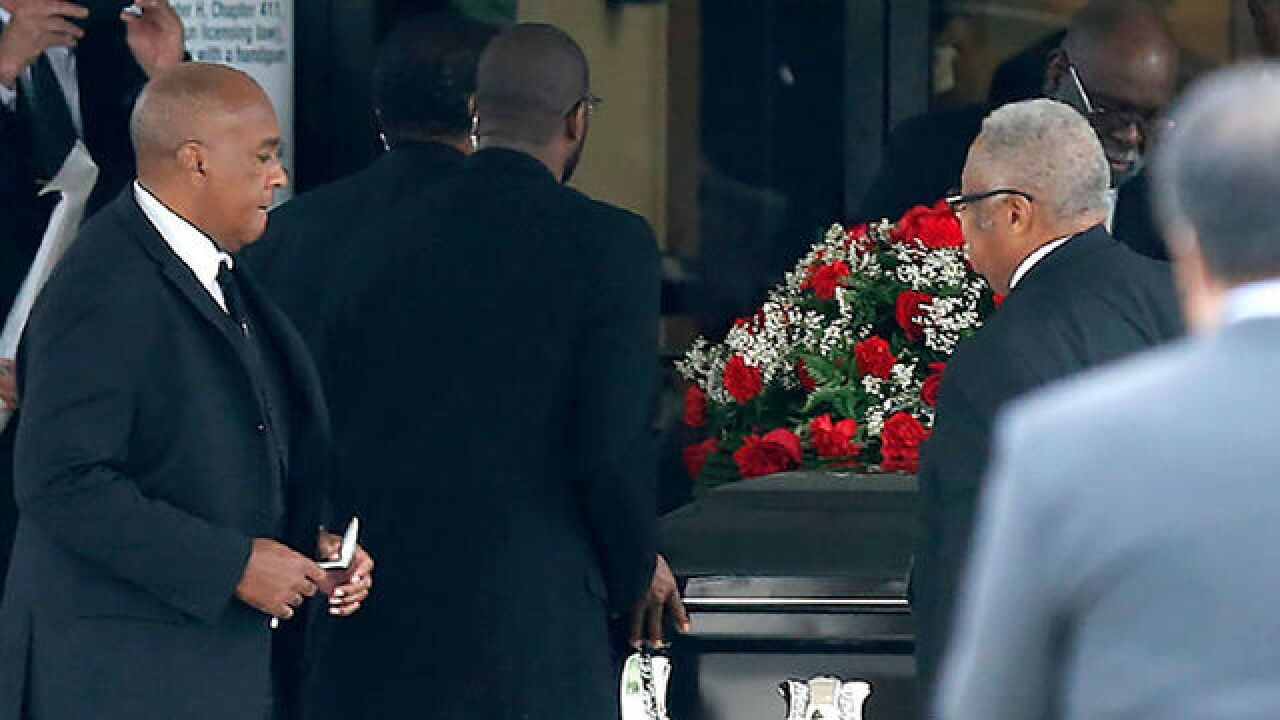 Copyright Getty Images
Stewart F. House
<p>The casket carrying Botham Shem Jean arrives at Greenville Avenue Church of Christ on September 13, 2018 in Richardson, Texas. Jean was killed when a Dallas Police officer who accidentally went into Jean's apartment, thinking it was her own and shot him. </p>

DALLAS, Texas — Friend after friend stepped to podiums at a suburban Dallas church Thursday to deliver tearful tributes to the kindness of Botham Shem Jean, the pious and beloved St. Lucia man killed by a police officer in his own apartment.

"Even in the violence and senselessness of his death, we are reminded that he was your gift, fearfully and wonderfully made -- not a hashtag, not a blurb, not a tweet, but your son, a prince in your kingdom," said David Wilson, tapped to deliver a prayer before Jean's eulogy.

Todd Gentry, who mentored Jean in how to minister, joked that everyone who knew Jean argued over his favorite song -- because "he had more than one."

His friend and business mentor, Tommy Bush, spoke of the high expectations Jean set for himself and how he always put God and family first. "I know that when God listens to Botham's heartbeat that it skipped to the same rhythm of his son," Bush said.

The funeral came a day after a Dallas City Council session turned testy when Jean's killing was raised. Confusion over a lack of answers surrounding how off-duty Dallas police officer Amber Guyger, according to her account to police, mistook his home for hers -- and then, how authorities failed to charge her for days -- morphed into anger at a City Council meeting the night before.

"When I got the phone, I was devastated. I was torn apart. I was ripped apart. He's a brother of mine," said minister Michael Griffin of Singing Hills of Church of Christ, one of many settings where Jean had shown off his pipes with a choir.

Griffin, who delivered a prayer at the funeral, told CNN before the service that he takes consolation in knowing that Jean "was a child of God." He described the 26-year-old Castries, St. Lucia, native as a generous soul who considered everyone a friend.

"He was the light. He didn't look at color. He loved everybody," Griffin said. "He was a person who would give you the shirt off his back and his sole purpose in life was to make humanity better, just to make you a better person, a better human."

Many of his relatives will watch the Dallas service from St. Lucia, Griffin said, and the family will hold a separate, more traditional ceremony when his body is returned home.

'His smile lit up a room'

As mourners filed into the Greenville Avenue Church of Christ, Jean's casket sat at the front of the sanctuary. Two screens showed photos of Jean laughing with friends, shooting hoops, sporting costumes and enjoying his days at Harding College in Searcy, Arkansas, the school from which he graduated before joining the accounting firm PricewaterhouseCoopers.

His mother, Allison Jean, visited the casket before embracing her fellow mourners in the sanctuary, as others who knew him or simply wished to pay their respects arrived by car and bus.

The funeral program says Botham Jean participated in student government at Harding, sang with the Good News Singers and led worship at the Church of Christ, of which he was a lifelong member.

"Botham had an enthusiasm for life that was contagious. His smile lit up a room. He was passionate about people and -- because of his faith -- shared his love and joy with everyone," the program says.

The page includes a piece of scripture, John 14:1-4, which includes the verse, "And if I go and prepare a place for you, I will come again and will take you to myself, that where I am you may be also."

'If you're white, you're right'

The solemn ceremony came a day after a City Council session was interrupted by protesters demanding answers in Jean's death. Guyger, who is white, has been charged with manslaughter in the killing and has told police she mistakenly thought Jean was in her apartment.

Residents and activists at the meeting condemned the fatal shooting and called for upgrading the police citizen review board to provide it with subpoena and investigative powers to ensure more police accountability. Mayor Mike Rawlings called a recess and left the meeting as residents chanted: "No justice. No peace."

Rawlings later told the The Dallas Morning News that he, along with the city manager and Police Chief Ulysha Renee Hall met with the activists who want to overhaul the current citizens police review board. The members of the 15-person board are appointed by Council members.

"It must have teeth. It must have subpoena power. It must be able to hold these police officers accountable for what they do," said demonstrator Olinka Green, according to CNN affiliate KTVT. "Because if we were to do the same thing, you guarantee we'd be locked up tight."

"We need to curtail the police because the police have made it plain: 'If you're white, you're right, if you're black, we'll put you flat on your back,'" Ruffin said.

Guyger out on bond

The fatal shooting happened at the South Side Flats in Dallas where Guyger and Jean both lived. Her apartment is directly beneath Jean's.

Jean was home alone when Guyger, still in uniform after her shift, entered his apartment, Hall said at the time of the shooting. Guyger parked her vehicle on the fourth floor, entered the building and walked toward what she thought was her apartment, according to an arrest warrant affidavit.

According to the affidavit, the door was slightly ajar as Guyger tried to use her key, which had an electronic chip, to enter. When she was able to open the door, she saw the interior was almost completely dark. Guyger described seeing a large silhouette and drew her firearm thinking there was a burglar in her apartment. She said Jean ignored her verbal commands and she fired two shots, hitting him once in the torso, the affidavit said. Jean died later at a hospital.

Guyger, a four-year veteran of the department, was released on a $300,000 bond after she was charged Sunday.

On Monday, demonstrators expressed anger at the fatal shooting. Police used "pepper balls" on some of the about 200 protestors at a demonstration. Hall later criticized the use of the projectiles and ordered investigators to review the matter.

"They are only to be utilized if instructed to do so by the on-scene commander or if there is an immediate threat to the public," the chief said. "I plan to meet directly with the leadership of the demonstration to address their concerns."

Dominique Alexander, founder and president of Next Generation Action Network, told the council he wanted to know that his two sons are "going to be safe in their own living room," and he wanted them to be able to decide where they want to live and start a family when they grow up.

Alexander was one of the activists who met with the mayor and police chief, the The Dallas Morning News reported.

"I want to have the confidence that Ms. Jean had with sending her boy across the world," he said.