Inside the hypersecure room where Powerball millionaires are made 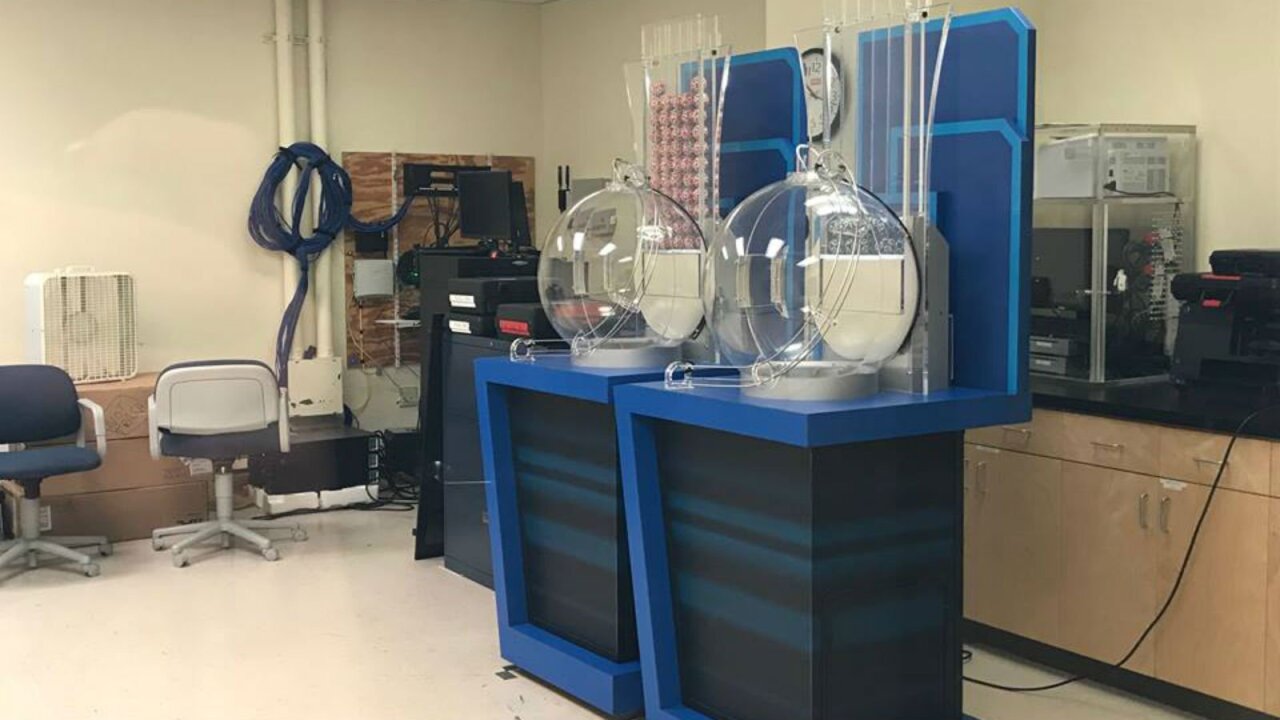 In a small studio in the bowels of the Florida Lottery headquarters building in Tallahassee, two little tornadoes of balls bounce merrily around inside two blinking bright blue machines. In an instant, some of the balls will pop up from the melee and roll down to a neat metal rack, and by the power of gravity and the even hand of chance, a new Powerball millionaire will be made.

It looks simple, but every move leading up to this moment has been painstakingly, precisely planned. Every ball has been weighed with gloved hands, every machine tested and selected at random from among several identical machines stored in a coded, sealed vault. You can't take pictures during the Powerball drawings, but there are security cameras everywhere. Across the country at the Multi-State Lottery Headquarters in Clive, Iowa, someone is sitting at a monitor watching every move in this room.

What, you thought this was a game? There's millions at stake every week. That's not game money. That's lottery money.

To understand the complex ballet of tight security protocols and tireless auditing that makes a fair Powerball draw possible, you first need to understand some lottery-level bureaucracy.

Powerball is a nationwide game run by the Multi-State Lottery Association (MUSL), but is typically drawn and broadcast here, in Tallahassee, which means it shares a space with Florida's own state lottery games. It also means that the law enforcement division assigned to oversee Florida Lottery security needs is also responsible for providing security for the Powerball drawings.

On Powerball nights (that's Wednesdays and Saturdays, for all you infrequent gamblers), the path to the pageantry starts in a small, unassuming little room with white walls. Only a few people are allowed into this room, but you can peek inside through two large, thick windows. This is the vault where the Powerball machines are kept, shrouded in heavy black covers until it's time to load them up for the show.

It takes three separate people to open the door — a lottery security agent, a representative from MUSL, and an independent auditor. Technically, that's more people than it takes to launch a nuclear missile.

Ron Cave, the director of security for Florida's Department of the Lottery, explains what happens next.

"As soon as the door is opened, I get an email, and the deputy director of security gets an email letting us know the vault has been opened," he says. "Then the randomization process can begin, to choose what machines and what sets of balls are going to be used for the draw."

There are four numbered Powerball machines in total, as well as four sets each of the 69 regular white balls and 26 red Powerballs. They're rubber, and each cost $100. The balls are weighed and inspected about once a year, and replaced roughly every two years.

"No one knows what machines and what sets are going to be used before this process," he says. The process by which they are randomly selected is one of many tightly-kept lottery security secrets.

The order of the balls

After the machines and the balls have been selected, the equipment is rolled into the studio for a few tests and drawing rehearsals. The balls are carefully placed into the clear chutes of the machine in numerical order, and none of them are ever touched directly by human hands — anyone handling the equipment is required to wear gloves.

"Once the machine is activated, it's completely automated," Cave says. "There is no more human interaction with the process."

It may seem incredibly analogue, but Cave says that actually makes the process more secure. There's very little concern that someone can hack into the system and somehow change the outcome when the results are decided by a bunch of balls blowing around in a bowl.

Plus, that's just more fun to watch than a computer.

With millions of dollars and a fair amount of public trust on the line, lottery security agents have no shortage of contingency plans in case something goes wrong.

It could be something minor, like an announcer saying the wrong number on the ball. That would be what lottery security agents refer to as a "foul."

"If that were to happen, someone in the studio would literally yell 'foul,'" says Larry Bourdeau, the deputy director of security for Florida's Department of the Lottery. "The announcer would then have to very clearly state the correct number, and the camera would show the number so there was no mistaking what it actually says."

Other fouls could occur if, say, a ball gets stuck in a chute or a part of the machine opens up during a drawing. In those cases, Bordeau says, a backup machine would be brought in and the drawing would continue where it left off. The whole thing would be recorded, and a copy of the recording would be posted publicly so people could see that everything was done transparently.

"No matter what happened, we would complete the drawing with integrity," Bourdeau says.

Even the drawing itself has backup. Several different states have drawing studios with up-to-date Powerball equipment, just in case something prevented the Tallahassee operation from making it to air. Bourdeau says hurricanes passing through the areas have triggered the use of backup studios at least three times in the game's 26-year history.

Once the Powerball machines are rolled into the studio, no unauthorized personnel are allowed inside, so all of the magic occurs from behind a large pane of glass in a small public viewing room.

Every drawing is open for anyone to come watch, so if you're ever in Tallahassee on a lottery drawing night, consider your evening booked. (To be clear, it seems the invitation is more in the interest civic transparency than entertainment: Even with the jackpot hovering near record numbers, not one member of the public darkened the door of the small viewing room on Wednesday night .)

Powerball drawings are broadcast nationwide at 10:59 p.m. ET, and the whole thing takes about 55 seconds from beginning to end. For all of the hours of preparation, the actual drawing is somehow as stressful as it is anticlimactic.

The local TV personalities contracted to call the numbers are old pros, but with millions on the line and less than a minute to correctly eke out all of the numbers, you may need a minute to catch your breath when it's all over.

And once it is over, it may take hours to find out whether someone scored the jackpot. If they did, then a whole new ballet begins -- one of private jets and ticket inspections and press conferences and giant, photogenic checks.

In fact, there's a forensics office in the Florida Lottery headquarters building where tickets can be tested and verified. When asked whether there were any markings on lottery tickets that would immediately confirm or negate their authenticity, the lottery security agents simply nodded their heads and smiled silently.

That, too, is a well-kept lottery secret.

Security Director Cave did say it's not unusual for lottery security agents to assist winners who want to travel to claim their prizes, which may be the future for one lucky Wisconsinite who matched Wednesday night's numbers .

For the rest of the millions of Powerball hopefuls, the magic will be packed up, sealed, and wheeled back into a vault, ready and waiting for the next big win.