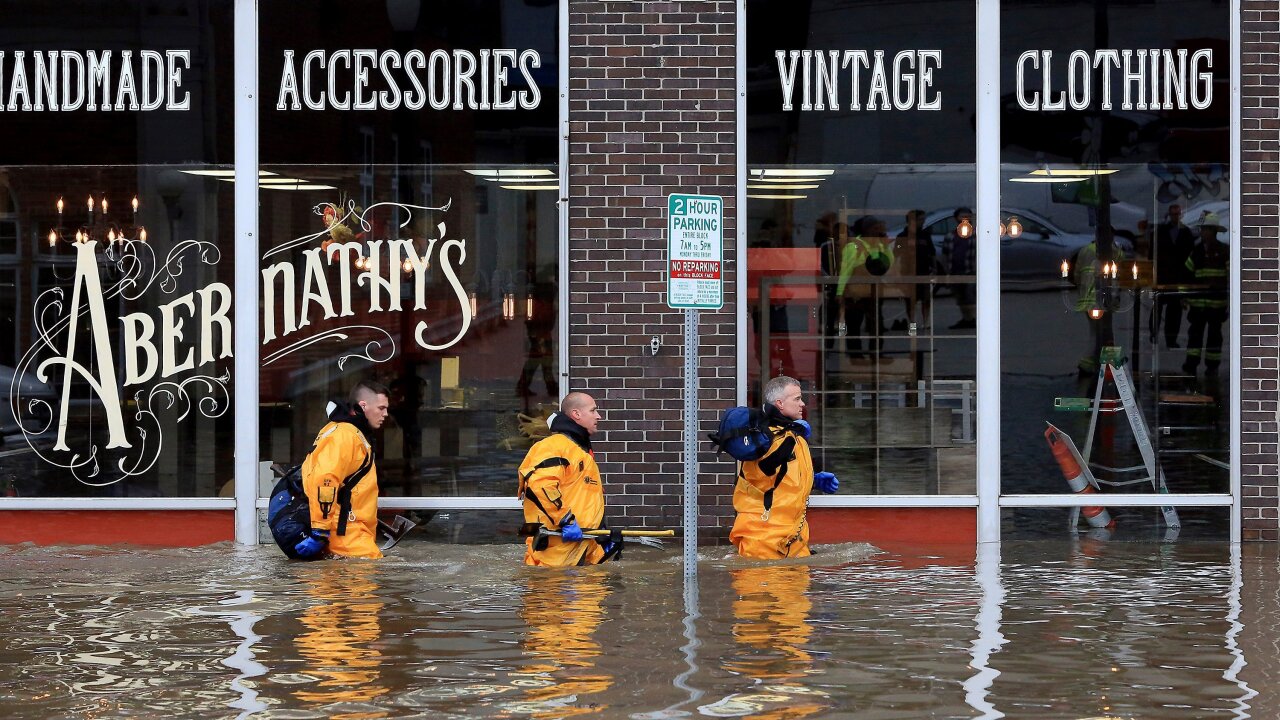 A portion of Davenport was still flooded Wednesday morning, a day after the swollen Mississippi River broke through a temporary barrier in the Iowa city and rushed into downtown, covering streets and surrounding homes and businesses.

With the river at flood stage in several states, Davenport's flooding could portend what other communities downriver may face in the coming days if barriers don't hold.

Tuesday afternoon's breach at Davenport's riverfront turned some downtown streets into a virtual lake, with water coming up to some vehicles' hoods and windshields. Water rushed into a few blocks, city official Kurt Allemeier said.

Fire department crews got into boats and helped ferry people from their surrounded homes and businesses, CNN affiliates WQAD and WHBF reported. In some instances they took residents to their homes to gather belongings, then brought them back to dry land.

Joe Gauthier told WHBF he just happened to be looking out a window from his downtown loft Tuesday when the water started rushing into the streets.

"I saw people running, and I saw some water coming up the side of the street. So I just threw my shoes on, grabbed my keys, and got my car out of the lot -- otherwise the car would have been sunk underwater," he said.

At Mary's, a downtown bar, volunteers spent Tuesday night into Wednesday morning working and sleeping in shifts, using sandbags and a water pump to keep water from coming into the front door, WQAD reported. Some slept on pool tables and cots, while others monitored the water, the station reported.

The water still was roughly ankle-deep on one downtown street Wednesday morning, video from WQAD showed.

A HESCO flood barrier failed Tuesday, the city said in a news release, allowing the river to rush into Pershing Avenue and Iowa and 2nd streets. The affected area contained mostly restaurants and shops, Allemeier said.

City workers have been trying to reinforce the barriers between the river and the city, the Federal Emergency Management Agency said.

In Davenport, the river is considered to be at major flood stage at 18 feet.

The crest could be higher if forecasted rain comes in heavier than expected. The Davenport area has some chance of showers Wednesday and Thursday. The end of the week looks to be sunny, but another system of wet weather could enter the picture next week.

Though the river may crest Wednesday in the Davenport area, it will rise in the coming days in communities and states downriver.

Recent heavy rain and melting snow have swollen portions of the Mississippi River, pushing it to major or moderate flood stage in parts of Iowa, Illinois and Missouri.

Up to their chests in water, fire fighters work through the night

Firefighters deal with large quantities of water all the time, but a crew in Bettendorf, next to Davenport, was almost up to their necks in it early Wednesday as they battled a garage fire threatening the house next to it.

A remarkable photo released by the city of Bettendorf shows three firefighters next to the burning garage, surrounded by floodwaters that were up to their chests.

The structures are just 100 yards from the Mississippi River.

According to the city, the firefighters responded to a call at 1:20 a.m. CT. Weather data shows temperatures were in the low 50s.

Emergency responders could only get to the property on an inflatable boat, the city said in a news release.

Firefighters arrived to find the garage engulfed in flames; the siding on the house nearby was melting. The crew saved the house first, then put out the garage fire, according to the city.

No one was injured and the cause of the fire has not been determined.

A gauge on the Mississippi near LeClaire, Iowa, shows the river is more than 5 feet above flood stage there.