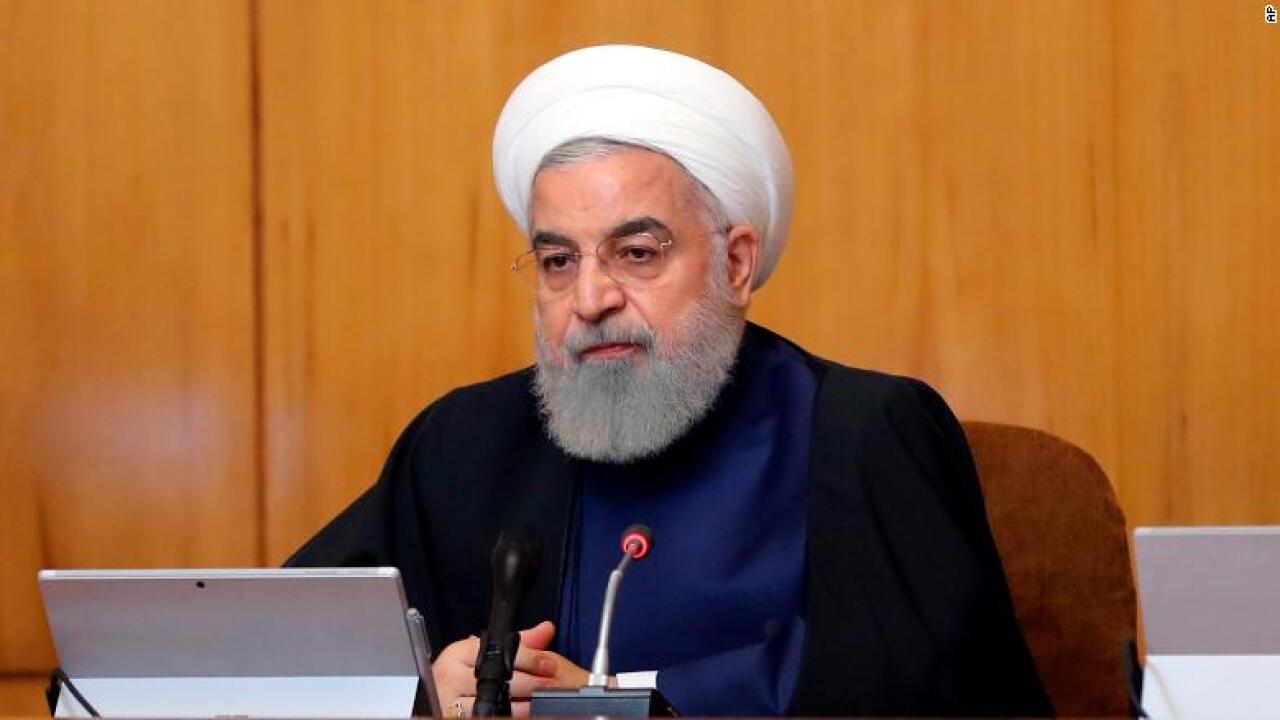 Iran will partially withdraw from a landmark nuclear deal signed with six other nations in 2015, amid heightened pressure from the United States in recent weeks .

President Hassan Rouhani said in a televised speech Wednesday that Iran would reduce its "commitments" to the deal, but would not fully withdraw.

The move comes a year after the US unilaterally withdrew from the deal, over the stringent objections of other signatories. Rouhani said those signatories -- France, Britain, Germany, Russia and China -- had been informed in advance of Tehran's move.

He accused "hardliners" in the US of working to undermine the deal, saying it was "in the interests of the region and the world, but not the enemies of Iran, therefore they spared no effort since 2015 to undermine (the deal)."

Under the agreement, Iran was permitted to stockpile limited amounts enriched uranium and heavy water produced in that process, exporting any excess. Doing so has become extremely difficult after the US revoked waivers that allowed Iran to export those excess stockpiles, effectively forcing Iran to halt enrichment or ignore the limits, which it is now doing.

"The Islamic Republic of Iran declares that at the current stage, it does not any more see itself committed to respecting the limitations on keeping enriched uranium and heavy water reserves," Iran's Supreme National Security Council (SNSC) said in a statement carried by the semi-official Fars news agency.

The SNSC said other partners would have 60 days to alleviate pressure on Iran caused by subsequent US sanctions, otherwise the country "will cease implementation of restrictions on uranium enrichment levels and measures related to the modernization of Arak Heavy Water Reactor as well."

"Once our demands are met, we will resume implementation of the ceased undertakings. Otherwise, the Islamic Republic of Iran will stop compliance with its other undertakings in consequent phases," the SNSC said.

On Twitter, Iranian Foreign Minister Javad Zarif said that the country was stopping measures that Washington "has made impossible to continue."

"Our action is within the terms of (the deal)," said Zarif adding that the other signatories had "a narrowing window to reverse this."

Iran is a signatory to the Nuclear Non-Proliferation Treaty and has always maintained that its nuclear research is purely civilian in nature.

The deal with Iran was widely hailed as a major diplomatic victory by the Barack Obama administration, but one that was immediately criticized by his successor.

Last year, US President Donald Trump withdrew his country from the deal , saying it was "defective at its core" and reimposing sanctions. Since then, anti-Iran hawks within his administration, particularly Secretary of State Mike Pompeo and national security adviser John Bolton, have been ramping up pressure on Tehran.

This week, Pompeo made a surprise visit to Iran's neighbor Iraq, where he accused Tehran of making military moves, including transporting short- and medium-range ballistic missiles aboard boats in the Persian Gulf, much of which falls within Iranian territorial waters or the country's Exclusive Economic Zone.

Speaking to reporters, Pompeo said he discussed the "threat stream we had seen" from Iran and stressed "the importance of Iraq ensuring that it's able to adequately protect Americans in their country."

The US Defense Department is now considering sending additional firepower to the region, including anti-missile defense systems, according to several US officials with knowledge of the situation.

Pompeo is a proponent of a "maximum pressure" approach to Iran, and in the past has appeared to support regime change in Tehran, such as in a speech last year in which he said the goal of the US was "to get the Iranian regime to behave like a normal nation."

Since then, the US has reintroduced all nuclear-related sanctions among a slew of other punitive measures. In the past month, it has moved to cut off Iran's oil revenues, its chief source of foreign income, put curbs on its civilian nuclear work, and designated Iran's Revolutionary Guard Corps, the elite military group with deep political and economic influence, as a terrorist entity.

What was the original deal?

Officially titled the Joint Comprehensive Plan of Action, or JCPOA, the nuclear deal was intended to limit Iran's civilian energy program -- thereby preventing it from developing nuclear weapons at some point in the future -- in exchange for relief from sanctions that were crippling the Iranian economy.

The deal was struck in Vienna following two years of intensive talks orchestrated by the Obama administration. It was signed by Iran and six other nations in 2015 -- the United States, the United Kingdom, France, Russia, China and Germany. The accord was also enshrined in a UN Security Council resolution, making it international law.

Under the deal, the Iranian government agreed to three key things :

Reducing the number of its centrifuges by two-thirds (centrifuges are tube-shaped machines used to enrich uranium, the material necessary for nuclear power); slashing its stockpile of enriched uranium by 98%; and capping uranium enrichment at 3.67% -- enough to continue powering parts of the country's energy needs, but not enough to ever build a nuclear bomb.

In addition, Iran was required to limit uranium research and development, and allow inspectors from the International Atomic Energy Agency (IAEA) certain access to its civilian nuclear facilities.

In return for its compliance, all nuclear-related sanctions on Iran were lifted in January 2016 , reconnecting the country's stagnating economy with international markets.