Emotions high as Ariana Grande, others perform in Manchester 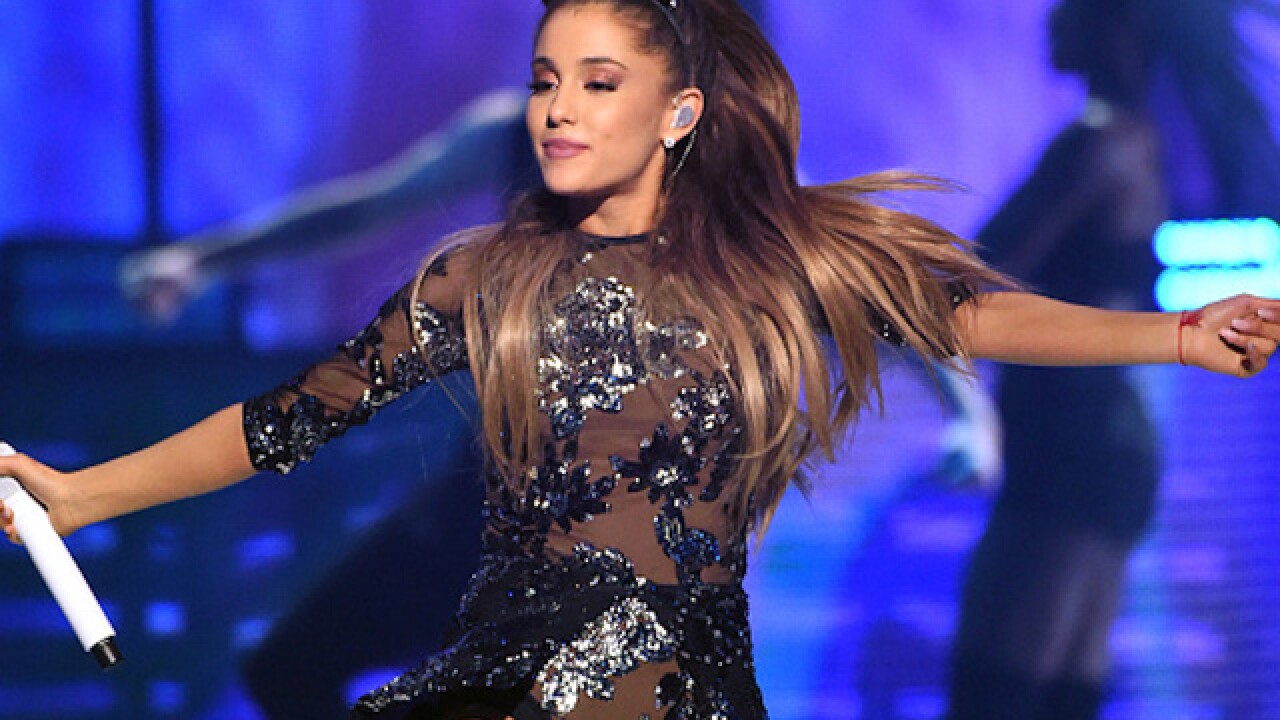 Ariana Grande performed before a jubilant crowd of some 50,000 in Manchester on Sunday, less than 24 hours after a deadly terror attack in the heart of London.

The "One Love Manchester" benefit concert by Grande and other pop stars went on as planned in the UK city, which is still recovering from a suicide bombing at Grande's show there two weeks ago.

Officials said security was bolstered for the concert, which aims to raise money for those affected by the bombing that killed 22 people and wounded more than 100 at Grande's May 22 show.

The show opened with a minute of silence for those killed and injured in the attack.

Then the crowd danced and sang through an all-star line up, which included Justin Bieber, Katy Perry, Miley Cyrus, Coldplay, Pharrell Williams, Usher and the Black Eyed Peas.

"It's not easy to always choose love, is it?" she asked the crowd. "Especially in moments like these, right? It can be the most difficult thing to do. But love conquers fear and love conquers hate," she said. "I encourage you to choose love, even when it's difficult. Let no one take that away from you."

The sentiment was echoed by fellow pop star, Justin Bieber, who said "You guys are so brave. ... Would you agree that love always wins?"

Grande ruled the night, performing her own songs and then joining the band Coldplay to perform the song "Don't Look Back in Anger." The song, written by Manchester band Oasis in 1995, has become a symbol of the city's resilience in the face of tragedy.

Last week, locals spontaneously broke into a rendition of the song at a public memorial to the victims of the attack.

The lead singer of Oasis made a suprise appearance during Coldplay's set. Hometown hero Liam Gallagher joined the band to sing "Live Forever," which he dedicated to victims of the attack.

Grande closed the show with a soaring rendition of "Somewhere Over the Rainbow," from the classic 1939 film, "The Wizard of Oz."

'Determined to carry on'

Some fans questioned whether Sunday's show would go on after three men drove a van into a crowd on a London bridge Saturday night before leaping out and stabbing numerous people in nearby bars and restaurants. Seven people were killed and 48 injured in the attack.

"All artists involved have been unwavering in their support this morning and are determined to carry on with the show. We ask the strong city of Manchester and the world to join us in making the statement that hatred and fear will never win," Braun said.

He went on to encourage fans to keep their concert plans, "and in tribute to all those affected here and around the world, we will bring our voices together and sing loudly,"

As details emerged of Saturday's terror incident, Grande responded with a tweet: "Praying for London."

As of late Sunday morning few of the other performers had tweeted in response to the London attack. But all had stated their commitment to the benefit concert in the week leading up to the show.

"Despite all the things that have been going on...I don't feel or smell or hear or see any fear in this building," Pharrell Williams said while singing a duet of "Happy" with Miley Cyrus.

Manchester authorities warned that everyone going to the concert would be searched, and the presence of armed police would be visible inside and outside the venue.

The Greater Manchester Police said more than 130,000 people were expected in the area for the benefit concert as well as a soccer match.

"There are two large-scale events taking place in Greater Manchester today and we would like to assure people that these will still take place, but with additional security in place to ensure the safety of everyone," Greater Manchester Police Assistant Chief Constable Garry Shewan said in a statement on Sunday.

Grande's concert was held at Emirates Old Trafford, an outdoor stadium about 3.5 miles from Manchester Arena, where the May 22 concert took place.

Greater Manchester Police Chief Superintendent Stuart Ellison said there would be a "significant number of officers" at the venue and encouraged people to leave bags at home.

Grande surprised young fans injured in last month's attack with a visit to the Royal Manchester Children's Hospital on Friday.

The singer shared a photo to Instagram of herself meeting with a young girl, Jaden Mann.

Jaden also shared pictures of the pop star at her bedside.

"Ariana brought everyone a sunflower and a teddy bear," Lauren Thorpe told CNN. "It was unbelievable."

Thorpe's eight-year-old daughter, Lily, suffered a shrapnel wound in her back and is recovering from surgery.

Also on Friday, Grande met privately with some of those who lost loved ones in the May 22 attack, including parents of Martyn Hett, 29, and Courtney Boyle, 19.

'Music will heal us'

Grande canceled upcoming shows in London and Switzerland to prepare for Sunday's "One Love Manchester" concert.

She had just left the stage May 22 when a suicide bomber detonated a nail bomb outside the arena as people were streaming out of the venue.

Within days, the singer posted a message of defiance and announced plans to return to Manchester for the benefit show.

"Our response to this violence must be to come closer together, to help each other, to love more, to sing louder and to live more kindly and generously than we did before," Grande said. "Music is meant to heal us, to bring us together, to make us happy. So that is what it will continue to do for us."