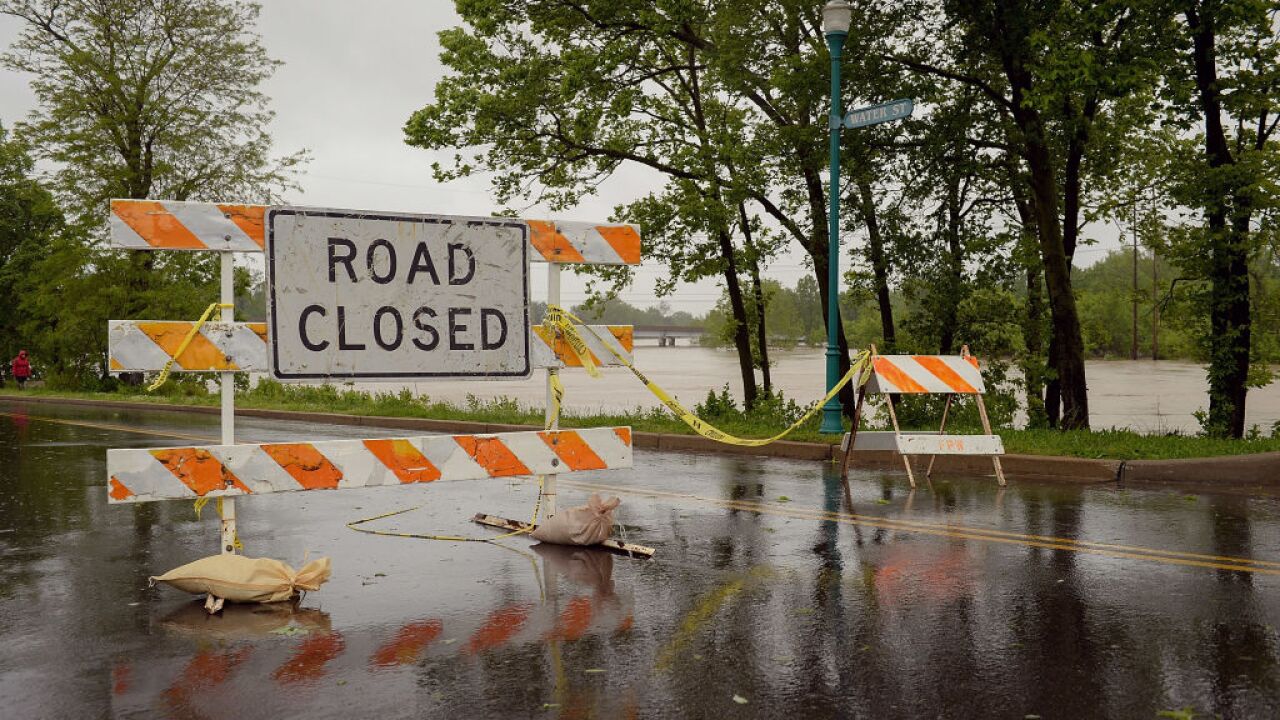 Heavy rain will continue to batter the Plains this week, and it won't stop there.

Storms will hit cities across Texas and Oklahoma Tuesday and Wednesday with the possibility for damaging winds, large hail and even tornadoes.

The storms are expected to shift over to the Mississippi River Valley, Mid South and Midwest on Thursday, the National Weather Service said.

As the system moves east, it is bringing rain and flooding. Nearly 4.5 million people already under flash flood warnings. Some 8 million are under a flash flood watch Tuesday due to heavy rain.

Near St. Louis, the Mississippi River remains closed to all vessel traffic because of extremely high water levels and fast-moving currents, the US Coast Guard told CNN. The closure began May 3.

The river has already crested north of Grafton, the National Weather Service said, and is expected to crest a second time following the ample rainfall the area has been receiving.

The river has been at an elevated state for weeks now, but flooding in South Dakota and Nebraska along with recent rain made areas of the river near Missouri the "highest they have been this spring," CNN Meteorologist Monica Garrett said.

Water is expected to slowly recede, but any further rain will slow down that process. The water will continue downstream where flooding will continue to be a concern into June, Garrett said.

In neighboring St. Charles, Missouri, flooding has been affecting industrial areas since Friday. The city announced it would be suspending enforcement that prohibits residents from parking a boat in their driveway, following flooding in boat and RV storage lots.

On Monday, the city said a breach in the Elm Point Levee caused multiple road closures.

"There has been a flash flood warning issued for our area," the St. Charles Fire Department said on Facebook. "We would like to urge everyone to remain calm."

The department said a handful of commercial properties will be directly impacted by the breech.

Most of the impact from the breech "is going to be limited to industrial," Kelly Hunsel, a spokeswoman with the St. Charles Fire Department, said. "We do have some areas that are flooding, we may have some road closures in the coming days as we watch weather."

The Missouri River at St. Charles also crested over the weekend. It is expected to remain above action stage for the next week, according to the National Weather Service.

A week after the swollen Mississippi River broke through a temporary barrier and flushed water through downtown Davenport, the Iowa city remains flooded.

The Mississippi River at Rock Island, by Davenport, reached a near-record crest of 22.58 feet last Friday and has since dropped to a crest of 21.1 feet, according to the National Weather Service. Anything above 18 feet is considered to be major flood stage.

There is a potential for more flooding in other cities southward along the Mississippi in several weeks, CNN meteorologist Chad Myers said.

The national weather service said rain is likely to continue across southeastern Iowa and eastern Illinois through the midweek with possibly up to 3 inches by Thursday.

"This may bring about more flooding or aggravate ongoing flooding," the weather service said.