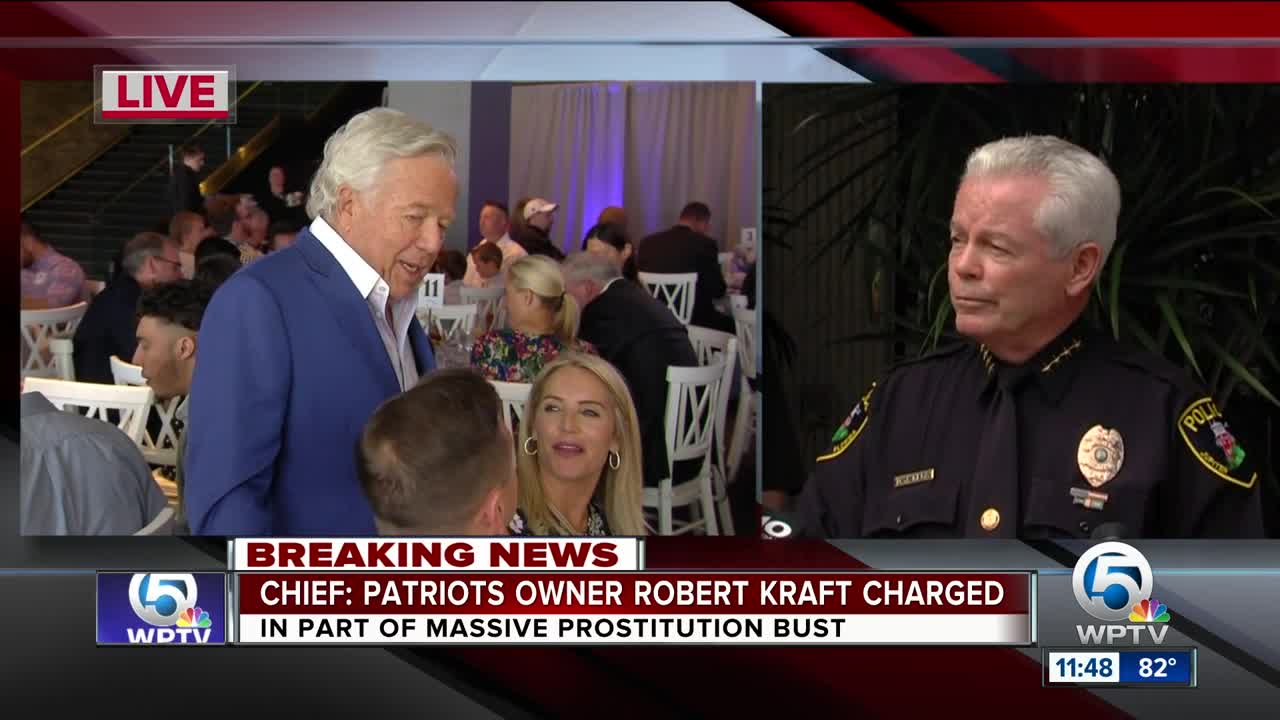 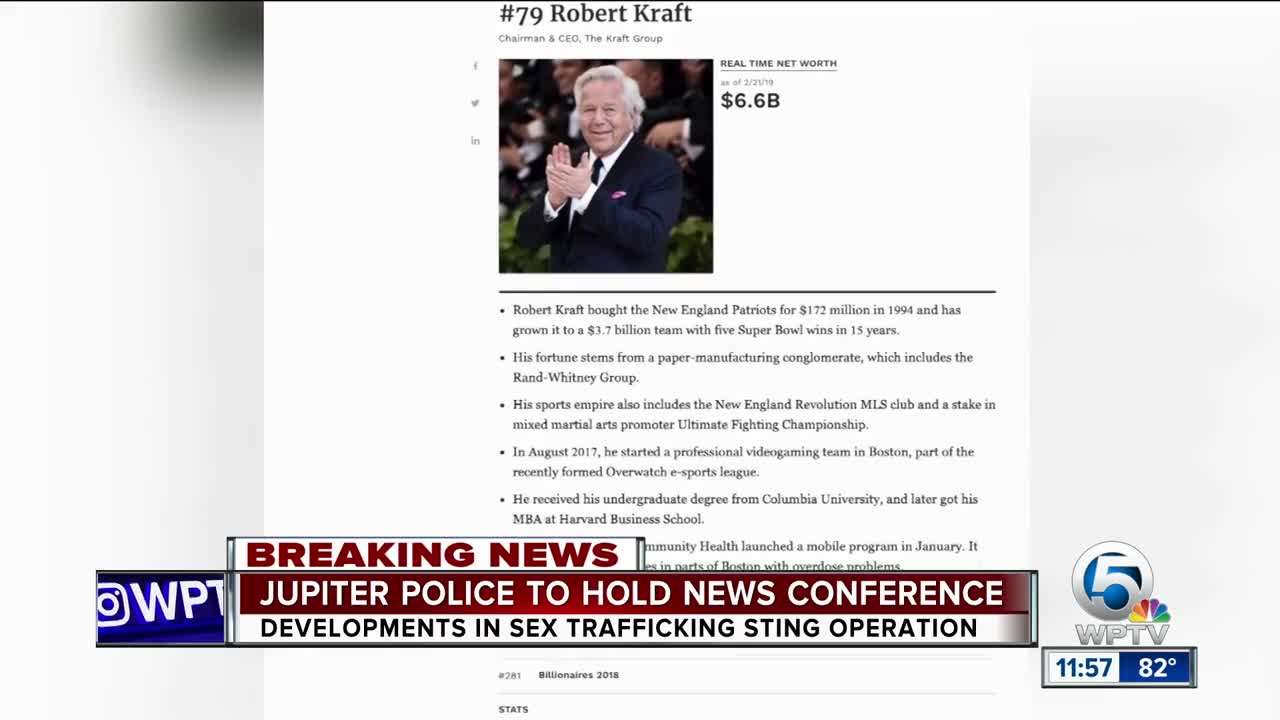 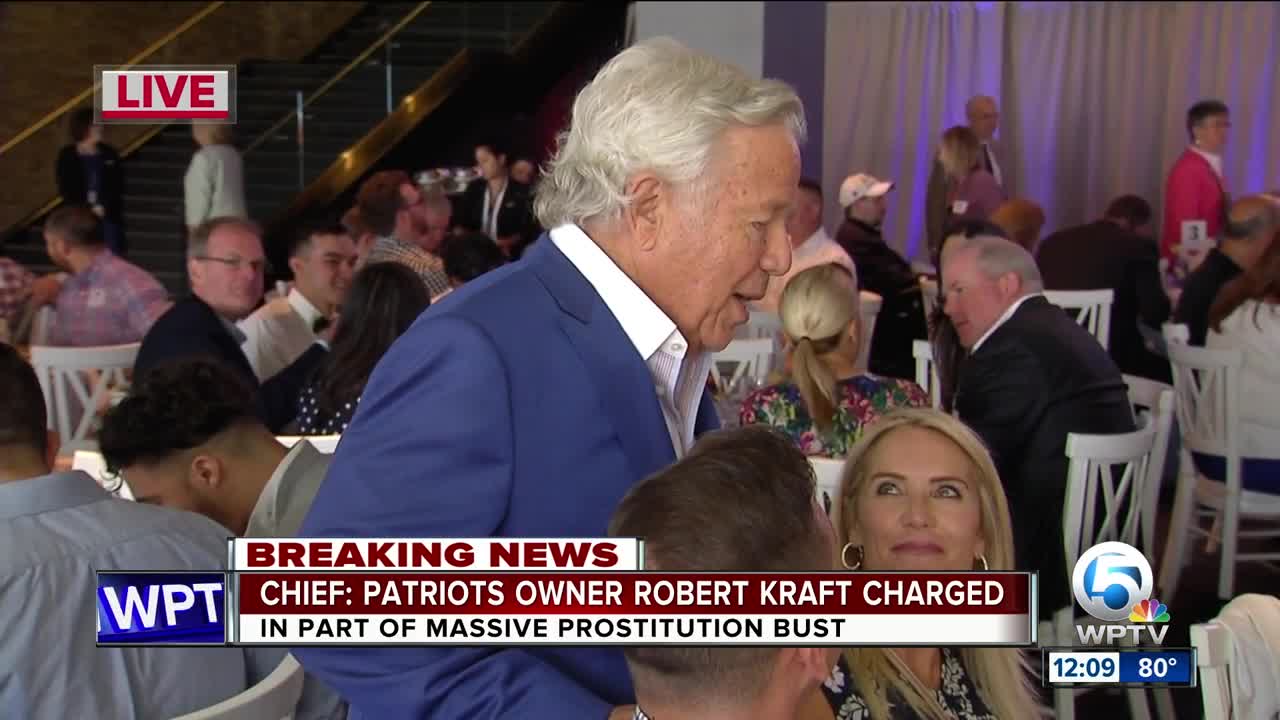 When asked about prominent people or celebrities, Snyder said, “There will be a newsmaker in this one.”

On Friday, Jupiter Police Chief Daniel Kerr confirmed to WPTV that Kraft is one of the men facing charges with soliciting another to commit prostitution. He confirmed that there is video evidence of all of the men being charged.

When asked if he was surprised about the arrest of Kraft, Chief Kerr said, "We're as deeply stunned as anyone else."

A friend of President Trump and frequent visitor to Mar-a-Lago, Kraft was in the area as recently as this past weekend, when he attended a fundraiser at The Breakers for the Everglades Foundation. Entertainment at the event included John Bon Jovi and Jimmy Buffet.

Kraft has dated actress Ricki Noel Lander, who is 39 years his junior, since 2012. He was previously married to Myra Hiatt from 1963 until her death in 2011.

According to the Palm Beach Daily News , Kraft owns a double apartment at 1. N. Breakers Row in Palm Beach, a rental building owned by The Breakers resort.

Kraft, 77, who in addition to the Patriots, owns the New England Revolution Major League Soccer team and other businesses, is number 79 on the Forbes 400 list of the richest Americans, with a net worth of $6.6 billion.

He and his family are active in philanthropic causes and have donated more than $100 million to a variety of organizations.

Kraft is the recipient of the 2019 Genesis Prize from Israel, widely known as the “Jewish Nobel” prize. It is granted each year to a person recognized as an inspiration to the next generation of Jews through professional achievement and commitment to Jewish values.

WPTV has reached out to the New England Patriots organization for a statement but has not yet received a response.

In response to TMZ, a spokesperson released the following statement:

“We categorically deny that Mr. Kraft engaged in any illegal activity. Because it is a judicial matter, we will not be commenting further.”

As for the human trafficking case in Martin County, Snyder described the operation as an 8-month, multi-agency investigation. “The tentacles of this go from here to New York to China, in Florida from here to Orange County,” Snyder said.

Snyder stressed the case is bigger than what was disclosed Tuesday.

“I think it’s very safe to say without any hyperbole that this is the tip of the iceberg,” Snyder said.

Five day spas were targeted as a part of the investigation: Cove Day Spa and Therapy Spa in Stuart, Bridge Day Spa and Sequoia Apple Day Spa in Hobe Sound, and Orchids of Asia Day Spa in Jupiter.

According to Snyder, investigators were tipped off through a complaint filed by the Health Department in July 2018.

Three women have been arrested on a variety of charges related to the investigation so far.

Sheriff Snyder said dozens and dozens of arrests are yet to come.

In Indian River County on Thursday, a multi-agency news conference announced the shutting down of three day spas and charges against of scores of customers and the spas’ operators. 165 men were charged with solicitation of prostitution.