New York attacker is a 'soldier of the caliphate,' ISIS says 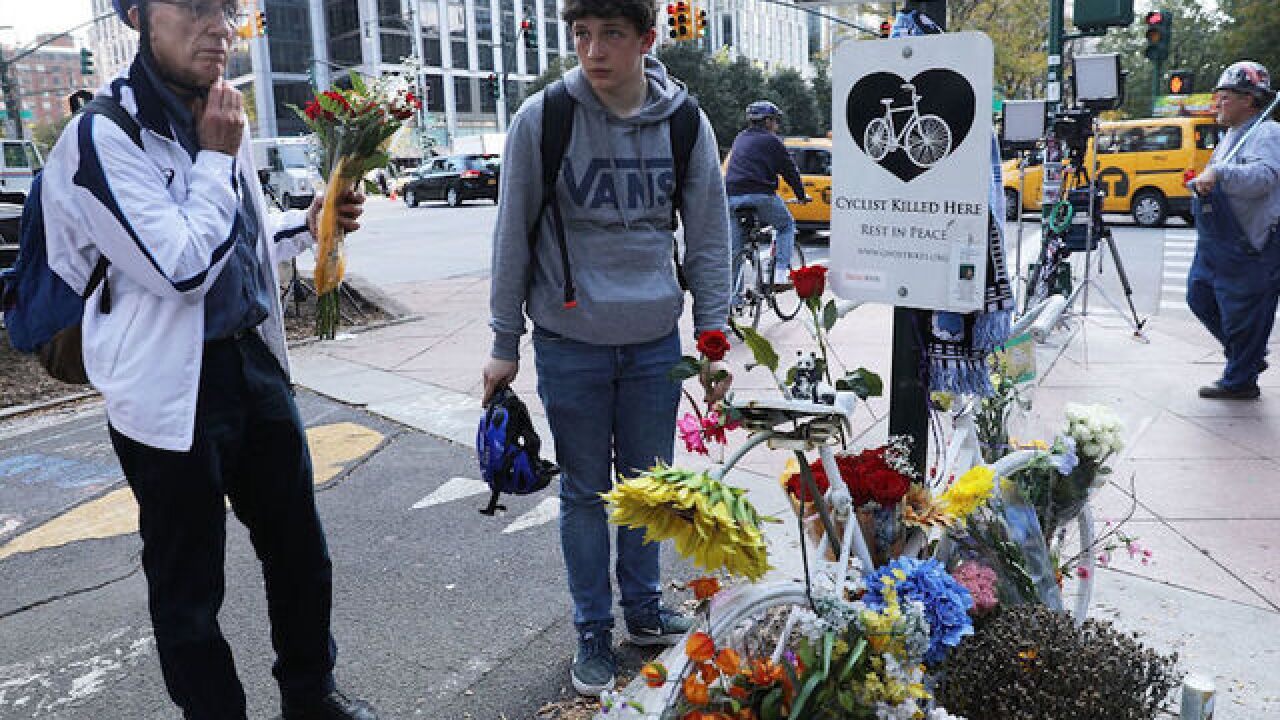 Copyright Getty Images
Spencer Platt
<p>People place flowers at a memorial at the scene of Tuesday's terrorist attack along a bike path in lower Manhattan on November 2, 2017 in New York City. Eight people were killed and 12 were injured on October 31 when suspect 29-year-old Sayfullo Saipov intentionally drove a truck onto a bike path in lower Manhattan. (Photo by Spencer Platt/Getty Images)</p>

The driver who plowed down pedestrians and cyclists on a New York bike path is a "soldier of the caliphate," the ISIS terror group said on its weekly newspaper, without providing evidence to back up its claim.

The attack Tuesday killed eight people and left more than a dozen others injured.

"One of the Islamic State soldiers in America attacked on Tuesday a number of crusaders on a street in New York City," the al-Naba newspaper reported Thursday.

The terror group provided no evidence that ISIS had knowledge of the attack before it happened or it was involved in planning it. The article did not name the attacker.

Suspect Sayfullo Habibullaevic Saipov has told authorities that he was inspired to carry out the attack after watching ISIS videos and closely followed the terror group's playbook for an attack.

While ISIS did not claim direct responsibility for the attack, it described the attacker as one of its soldiers.

The 29-year-old Uzbek native was charged with providing material support to ISIS, violence and destruction of motor vehicles, said Joon H. Kim, acting US attorney for the Southern District of New York.

Saipov drove a rental truck down a bike path in New York's Lower Manhattan, crashed into a school bus and then jumped out, brandishing imitation firearms, officials said. He was shot by New York police Officer Ryan Nash in the abdomen and taken into custody.

He didn't enter a plea Wednesday to the federal terror charges.

Saipov was so devoted to ISIS, he wanted to display the terror group's flag in his hospital room, documents show. He had about 90 videos and 3,800 images on a cell phone featuring ISIS propaganda, including video of a beheading, according to the complaint.

This is the first time the terror group has put such a claim on its newspaper before releasing it on its media wing, Amaq news agency, which is its first point of publication for claims of responsibility.

The wording of the ISIS statement -- not claiming the attack as an outright act of ISIS and saying the person carrying the attack is one of its "soldiers" -- mirrors ISIS' language in statements after an attack in France and the nightclub shooting in Orlando last year.

Those who crossed Saipov's path are trying to reconcile the man they met and the one they are now hearing about.

When approached in the lobby of her Brooklyn apartment building, the suspect's mother-in-law said she was in shock.

"I don't know what happened," she said.

Those who knew him in Tashkent, Uzbekistan, and in at least three states he bounced between since coming to America say they saw no warning signs of Saipov being radicalized.

"He was happy that he was here, he had a family here, and he was a truck driver and his business was really good," said Makhina Kadirova, a childhood friend.

His neighbors described him as a quiet and said his family didn't socialize often.

On Twitter, President Donald Trump said Saipov should be executed and added that he "would love" to send him to the Guantanamo Bay detention camp in Cuba.

"NYC terrorist was happy as he asked to hang ISIS flag in his hospital room. He killed 8 people, badly injured 12. SHOULD GET DEATH PENALTY!' the President tweeted Wednesday night.

Presidents typically do not comment on pending criminal cases because their statements could be seen as influencing a potential jury pool.

The work started Thursday as part of a statewide review of shared-use paths, according to the New York State Department of Transportation.

A total of 57 barriers are being positioned diagonally along the path, leaving enough space for bicycles but not for larger vehicles, CNN affiliate WABC reported.

But some local cyclists think the barriers are problematic.

"There's no way two bikes can pass each other there and the runners as well," New York City resident James Petty told WABC. "There's going to be accidents."

Similar concrete barriers were placed in May after a man drove a car onto a crowded sidewalk in Times Square, killing a teenage woman and injuring at least 22 people.