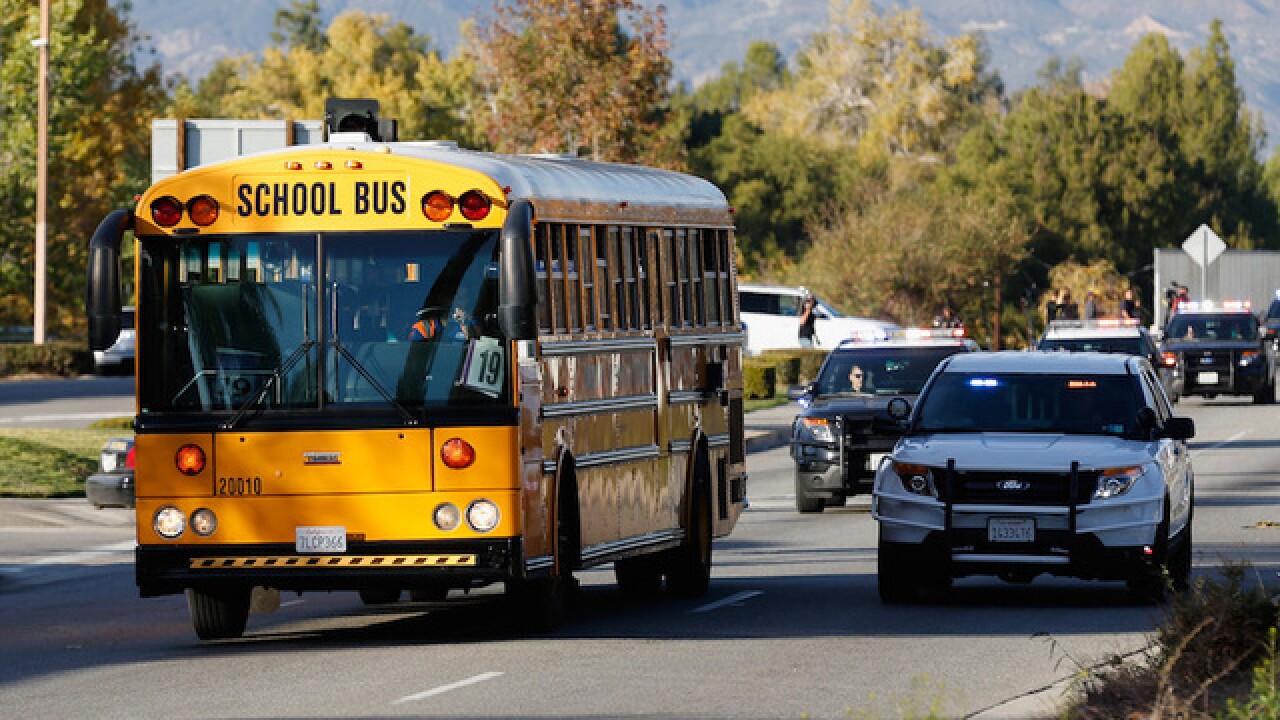 Copyright Getty Images
Sean M. Haffey
<p>A school bus is escorted by law enforcement from the vicinity of the shooting at the Inland Regional Center on December 2, 2015 in San Bernardino, California. </p>

Parents often worry about their kids riding the school bus. But waiting for the bus or getting off after school can pose a far greater danger.

The risk was highlighted this month, as at least five children lost their lives when they were hit by drivers near school bus stops across the U.S. At least seven other children were hurt in bus stop incidents.

Now, a petition on WhiteHouse.gov seeks to call upon national leaders to create and sign legislation that institutes stricter penalties on drivers who violate rules around stopping for school buses.

The petition makes suggestions such as 30 days in jail and 90-day license suspensions.

Overall, wrecks involving school transportation, including buses, make up a tiny fraction of deadly vehicle incidents — less than 1 percent of nearly 325,000 fatal crashes in the US from 2006 to 2015, National Highway Traffic Safety Administration data show.

But more than one-third of school-age children who died in those school-transportation-related wrecks — 102 children — were on foot when they were killed, including some hit by school buses, the data show. Most of the others were riding in vehicles that were not school buses.

Nothing suggests the threat to students waiting for rides to school is rising, and safety experts say the school bus is still the safest way for a child to ride to school.

But this week's tragedies underscore the need for greater vigilance by pedestrians and motorists, who must be attentive in school bus zones, said Charlie Hood, executive director of the National Association of State Directors of Pupil Transportation Services, or NASDPTS.

Children "are most vulnerable when they are pedestrians," he said.

In most states, drivers are required to stop and wait for a stopped school bus with flashing lights and a raised stop arm, except where provisions for multilane highways apply. In at least two incidents this week -- in Indiana, where three siblings were killed, and in Tallahassee, where a kindergartner reportedly was hurt -- police said the bus's stop arm was raised when drivers struck the children.

On a single day during the school year that ended in the spring, 20 percent of bus drivers reported that nearly 84,000 vehicles passed their buses illegally, according to NASDPTS, which surveyed drivers in 38 states and the District of Columbia.

The prior year, a 7-year-old girl who'd exited a school bus in Mississippi was killed by a vehicle that swerved to the right side of the bus while its stop arm and eight-way red lights were activated, the National Association for Pupil Transportation reported.

Results of the NASDPTS' annual survey have fluctuated between 75,000 and 85,000 errant vehicles since 2011 in what Hood called an "unfortunately consistent" pattern to a seemingly "intractable" problem.

"It's not an easy issue to solve. If it were, the numbers would be going down over the years," he said, adding that it's not for lack of trying.

Law enforcement has ramped up its public education efforts and enforcement of speed limits in school zones, he said. And school bus drivers are doing their part to educate riders on ways to board and exit safely.

Countervailing those efforts, though, could be distracted driving, as people glance at their smartphones while behind the wheel, he said.

"We don't have any data to quantify why it's happening, but we all know we've seen more distracted driving in recent years," Hood said. "Some people are definitely rushing to get somewhere and blowing past buses. I think a lot of people are just distracted and just don't realize what they're doing."

'A safe, clear way for people to walk'

Pedestrians can get distracted, too, and that also contributes to vehicle wrecks, said Jonathan Adkins, executive director of the Governors Highway Safety Association.

Pedestrian deaths increased by 27 percent from 2007 to 2016, while all other traffic deaths dropped by 14%, the group reported. It means pedestrians accounted for a larger proportion of traffic fatalities than they had in the prior 33 years.

"It's really a wake-up call for parents and communities across the country to look around their schools and neighborhoods and put together a plan," he said. "They need to make sure there's a safe, clear way for people to walk or bike or do a drop-off."

Education programs in schools that teach children when to cross streets and what to look for also are key, Hoffman said. And driver's education and licensing tests should ensure that drivers know rules about when to stop for school buses.