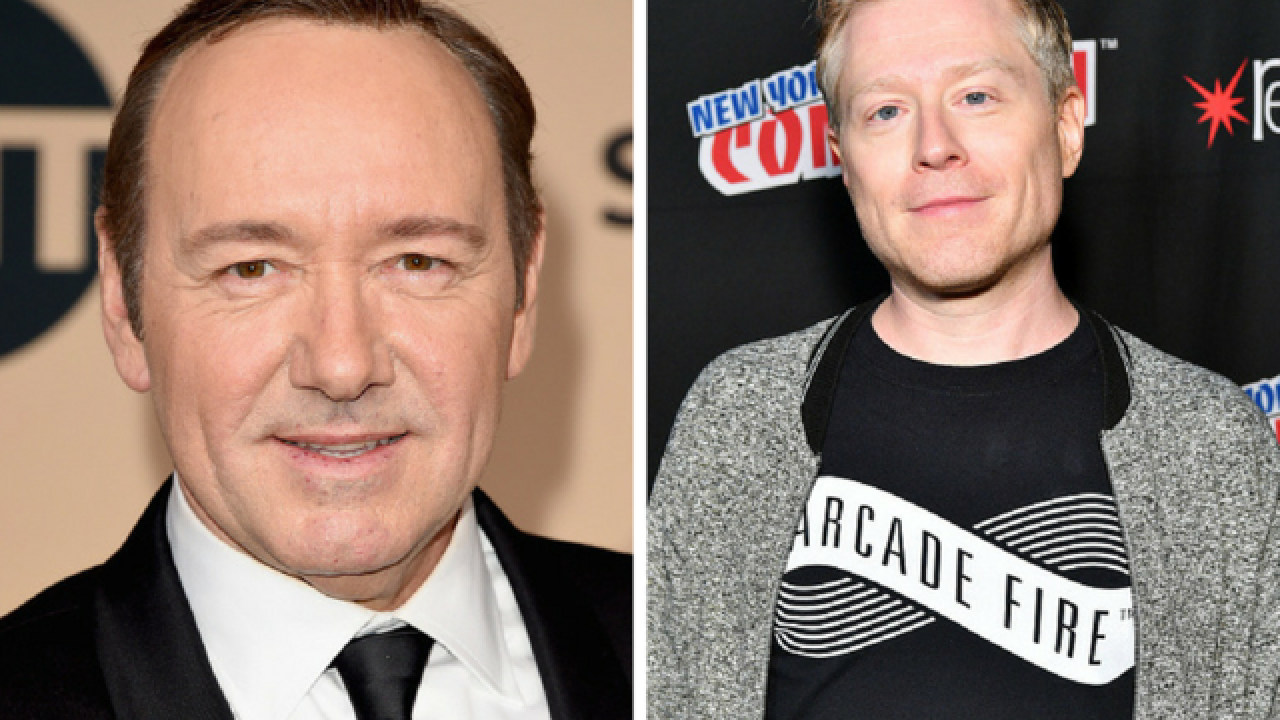 Image copyright 2017 Getty Images. All rights reserved. This material may not be published, broadcast, rewritten, or redistributed.
<p>Kevin Spacey has released a statement in response to actor Anthony Rapp's allegation that Spacey made a sexual advance toward him when Rapp was just 14 years old in 1986.</p>

Kevin Spacey made the set of Netflix's "House of Cards" into a "toxic" work environment through a pattern of sexual harassment, eight people who currently work on the show or worked on it in the past tell CNN. One former employee told CNN that Spacey sexually assaulted him.

The former production assistant, whose account has never previously been disclosed, told CNN that Spacey sexually assaulted him during one of the show's early seasons. All eight people, each of whom spoke to CNN on the condition of anonymity for fear of professional repercussions for speaking out, described Spacey's behavior as "predatory," saying it included nonconsensual touching and crude comments and targeted production staffers who were typically young and male.

The new accusations follow an explosive article published less than a week ago by BuzzFeed News, in which actor Anthony Rapp said Spacey made sexual advances toward him in 1985, when Rapp was 14 years old.

On Monday, Spacey released an apology in response to Rapp's account. "I honestly do not remember the encounter, it would have been over 30 years ago," Spacey said. "But if I did behave then as he describes, I owe him the sincerest apology for what would have been deeply inappropriate drunken behavior, and I am sorry for the feelings he describes having carried with him all these years."

Spacey's publicist said in a statement on Wednesday that the actor is seeking unspecified treatment following Rapp's allegations.

On Thursday, that publicist -- Staci Wolf -- said she and Creative Artists Agency were parting ways with the actor.

Production of Season 6 of the series was shut down this week. Netflix and the production company Media Rights Capital issued a joint statement Tuesday to say that they are reviewing the "situation and to address any concerns of our cast and crew." Spacey is also one of the show's executive producers.

The former production assistant who spoke with CNN said Spacey sexually assaulted him one afternoon when the assistant was assigned to drive to an offsite location to pick up Spacey and bring him to the "House of Cards" set, which is located about 30 miles outside of Baltimore.

"I was in a state of shock," he said. "He was a man in a very powerful position on the show and I was someone very low on the totem pole and on the food chain there."

The production assistant asked that what happened next in the car not be described, for fear that it would identify him.

The assistant said the harassment then stopped for long enough for him to feel comfortable driving with Spacey to the set.

"I have no doubt that this type of predatory behavior was routine for him and that my experience was one of many and that Kevin had few if any qualms about exploiting his status and position," he said. "It was a toxic environment for young men who had to interact with him at all in the crew, cast, background actors."

The other people who worked on "House of Cards" with whom CNN spoke all supported the idea that the set could be toxic for young men because of Spacey.

A crew member who worked on the show for all six seasons said that Spacey routinely harassed and touched him.

"He would put his hands on me in weird ways," the crew member said. "He would come in and massage my shoulders from behind or put his hands around me or touch my stomach sometimes in weird ways that in normal everyday conversation would not be appropriate."

This crew member said he did not "feel comfortable" telling Spacey to stop. "That's the worst part about this whole thing. I would love to be able to speak out about this kind of stuff and not fear."

Related: Kevin Spacey criticized for how he came out

CNN spoke to a close friend of the crew member, who says that the crew member had told him about Spacey's behavior over the course of the six seasons of the show that it happened.

"Netflix was just made aware of one incident, five years ago, that we were informed was resolved swiftly," the statement said. "On Tuesday, in collaboration with MRC, we suspended production, knowing that Kevin Spacey wasn't scheduled to work until Wednesday. Netflix is not aware of any other incidents involving Kevin Spacey on-set. We continue to collaborate with MRC and other production partners to maintain a safe and respectful working environment. We will continue to work with MRC during this hiatus time to evaluate our path forward as it relates to the production, and have nothing further to share at this time."

MRC, the production company behind "House of Cards," told CNN in a separate statement on Thursday that they have implemented "an anonymous complaint hotline, crisis counselors, and sexual harassment legal advisors for the crew."

"We are deeply troubled to learn about these new allegations that are being made to the press concerning Kevin Spacey's interaction with members of the crew of House of Cards," the MRC statement said. "As the producer of the show, creating and maintaining a safe working environment for our cast and crew has always been our top priority. We have consistently reinforced the importance of employees reporting any incident without fear of retaliation and we have investigated and taken appropriate actions following any complaints. For example, during our first year of production in 2012, someone on the crew shared a complaint about a specific remark and gesture made by Kevin Spacey. Immediate action was taken following our review of the situation and we are confident the issue was resolved promptly to the satisfaction of all involved. Mr. Spacey willingly participated in a training process and since that time MRC has not been made aware of any other complaints involving Mr. Spacey."

MRC did not elaborate about the complaint it cited in the statement. They added that they will continue to investigate all claims brought to their attention.

Other people with whom CNN spoke describe behavior similar to that recounted by the crew member.

A former camera assistant, who said he witnessed Spacey's behavior but was never harassed by Spacey, said the touching largely occurred in an open space and that "everybody saw."

"All the crew members commented on his behavior," the former camera assistant said. "What gets me is we have to sign sexual harassment paperwork before the start of the show and apparently [Kevin Spacey] doesn't have to do anything and he gets away scott-free with this behavior." CNN confirmed that Spacey was given guidelines regarding sexual harassment in the workplace.

Colleagues never complained because they were afraid of losing their jobs, the former camera assistant said.

"Who is going to believe crew members?" he said. "You're going to get fired."

A former female production assistant who worked on several seasons of "House of Cards" said she witnessed Spacey's sexual misconduct with crew members on set.

"It was very known that Kevin was inappropriate, and males I worked with complained to me about how they felt uncomfortable," she said. "Kevin does this thing which was play fights with them in order to touch them." She said she saw Spacey approach "multiple people" to "say hello, greet them, shake their hand and pull their hand down to his crotch and touch their crotch. I have friends say he reached up their shorts on set."

Spacey also made sexually-charged comments on set, according to a former crew member.

"There was one instance [when] a grip bent over to pick something up and his ass crack was showing, and Kevin Spacey made a sexual comment about it," he recalled, adding that the comment Spacey made was "nice ass."

The allegations about Spacey also come as the entertainment world is reckoning with fallout from the Harvey Weinstein sexual harassment scandal. Dozens of women have accused him of sexual harassment and police are investigating assault claims. Weinstein has apologized for his behavior, but he denies all allegations of nonconsensual sex.