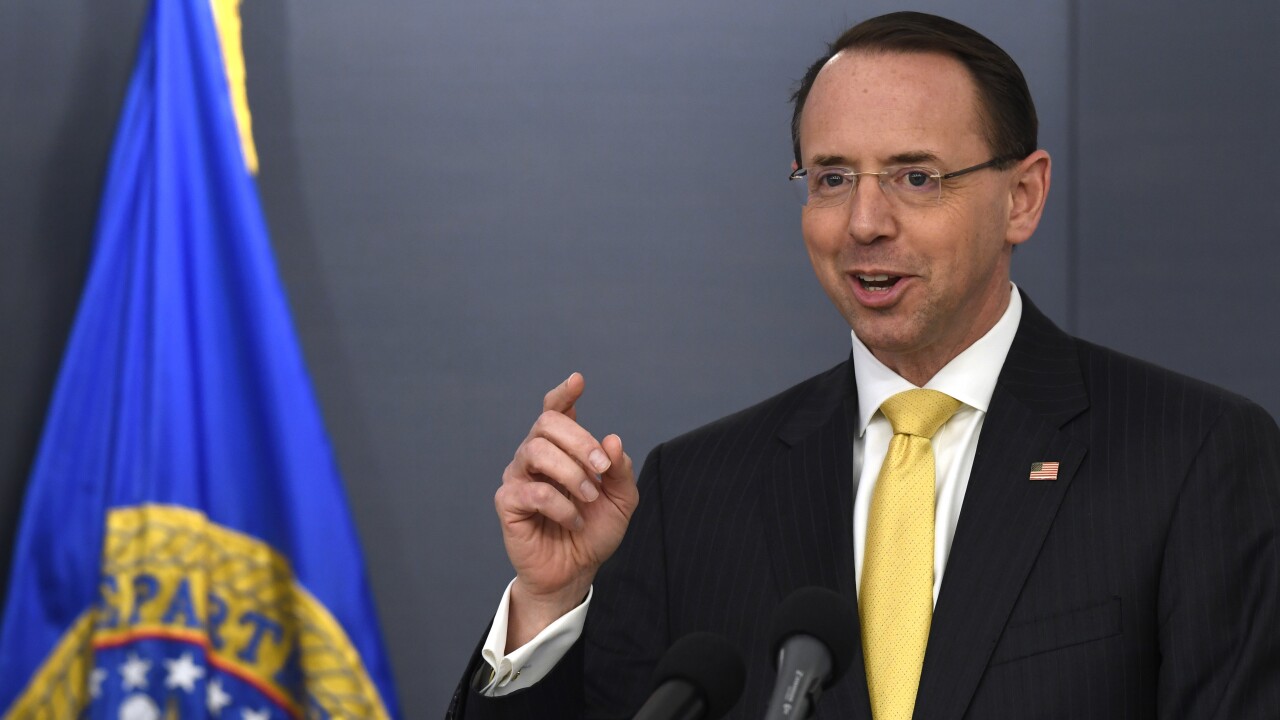 Rod Rosenstein took aim at James Comey Monday, calling him a "partisan pundit" in prepared remarks for a speech that included the most public retelling yet of the twists and turns of the Russia investigation by the man who oversaw it.

Speaking to a group of business and civic leaders in Baltimore, the former deputy attorney general -- just days removed from a tumultuous tenure at the Department of Justice -- recounted how he had prepared a memo in 2017 that supported President Donald Trump's firing of Comey, then the FBI director, and defended his decision to appoint Robert Mueller as a special counsel in the wake of that firing.

Rosenstein also responded directly to a barb from the former FBI director, who said at a CNN town hall last week that Rosenstein's character wasn't strong and that his soul had been "eaten" by his time in the Trump administration.

"Now the former director is a partisan pundit, selling books and earning speaking fees while speculating about the strength of my character and the fate of my immortal soul. That is disappointing," Rosenstein said.

In his speech before a crowd of nearly 1,000 people at the annual Greater Baltimore Committee dinner, Rosenstein acknowledged the unusual role he played in the drama of Trump's Washington -- as a Republican held up by the left for stewarding the Mueller probe.

"People spend a lot of time debating whose side I was on, based on who seemed to benefit most from any individual decision," Rosenstein said. "But trying to infer partisanship from law enforcement decisions is a category error. It uses the wrong frame of reference."

On Monday, with the frame of hindsight, Rosenstein told the audience why he disagreed with Comey's handling of the Hillary Clinton email investigation, and how he put those concerns in a memo at Trump's request.

Rosenstein also remembered how he disobeyed Trump's request to include in that memo that Comey had told Trump that he wasn't under investigation -- "because, one, I had no personal knowledge of what the director said, and two, in any event, it was not relevant to my memo" -- and criticized the way the President carried out the firing.

"If I had been the decisionmaker, the removal would have been handled very differently, with far more respect and far less drama," Rosenstein said.

Rosenstein didn't quote Mueller in his evening remarks -- like he did in a separate appearance at the University of Baltimore Law School earlier Monday -- but he did borrow a line from Attorney General Bill Barr, aligning himself with Barr's views on the appointment of special counsels.

Rosenstein stood by his decision to appoint Mueller and challenged critics to "explain what they would have done with the details we knew at the time."

"As acting attorney general, it was my responsibility to make sure that the Department of Justice would conduct an independent investigation; complete it expeditiously; hold perpetrators accountable if warranted; and work with partner agencies to counter foreign agents and deter crimes. We achieved those goals," Rosenstein said.

Still, he expressed his displeasure with the process, noting "I disfavor special counsels."

"I am glad that I only needed to appoint one in 25 months," Rosenstein said.