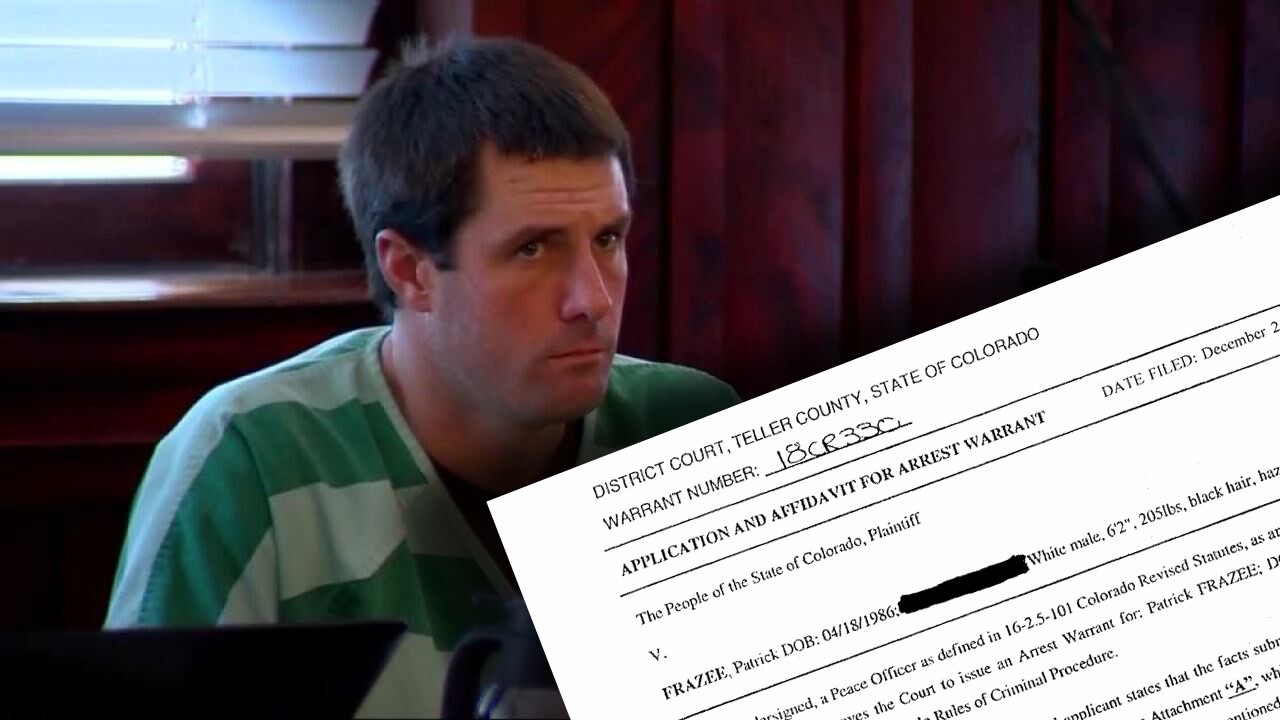 DENVER – Search warrants in the ongoing investigation into the disappearance and death of Kelsey Berreth released publicly Wednesday detail how investigators pieced together evidence to charge Frazee and an Idaho nurse in connection with Berreth’s disappearance, including the discovery of blood in several locations.

The state released 21 search warrants related to Frazee’s ongoing case Wednesday morning. They were executed between the beginning of December and late January.

The warrants detail every step of the investigation into the disappearance of the 29-year-old Woodland Park mother and what led them to charge Frazee with two counts of first-degree murder, three counts of solicitation of murder, tampering with a deceased human body and two sentence enhancers.

MORE: Kelsey Berreth case: A timeline of everything investigators have uncovered in woman's murder

The warrants also explain how police found out the former Idaho nurse, Krystal Lee Kenney, had worked with Frazee to get rid of Berreth’s cell phone and help him cover up Berreth’s alleged murder. Kenney pleaded guilty to tampering with evidence on Feb. 8 and has agreed to cooperate with prosecutors.

The documents contain some peculiarities that police looked into while investigating Berreth’s disappearance.

According to the warrant police obtained to search the home Frazee and his mother shared in Florissant in mid-December, supporting documentation for the warrant application showed that Woodland Park police received a Facebook message of a screen shot of a post made by a woman named Sheila McCorkle-Frazee at 4:36 p.m. on Nov. 22 that shows a picture of Glinda from “The Wizard of Oz” and says, “YAY the witch is dead”.

Police wrote in the warrant just after the screen shot: “There have been several inconsistencies between the information that Patrick initially gave officers and information obtained during the investigation.”

Frazee’s arrest affidavit showed that Berreth was last seen alive when she was captured on surveillance cameras at the Woodland Park Safeway with her daughter at 12:27 p.m. on Nov. 22, and that investigators believe Frazee killed Berreth inside her apartment before 3:30 p.m. that day, according to the warrant.

The same warrant for the search of the Frazee home in Florissant shows that investigators recovered a “floral fitted sheet with possible blood” and five teeth – four in one envelope and another separately. They were among 67 items seized during the search.

Kenney had told police that Frazee believed he had knocked out one of Berreth’s teeth when he allegedly killed her inside her apartment.

Kenney told investigators that Frazee had called her down from Idaho to clean up Berreth’s murder after he allegedly ordered her to kill Berreth several times prior to him carrying out the alleged murder himself.

The warrants also show the photo of blood that Berreth’s mother and brother found on a toilet at her apartment, which led to another police search of her home for more possible evidence and furthered the suspicion at the time that foul play was involved.

And they show the letter that Frazee wrote about three weeks after Berreth disappeared discussing giving custody of his daughter to his mother.

“Based on my knowledge and experience the information attached in the above photograph, Patrick could attempt to harm himself, flee the jurisdiction, or this is an indication that he believes he could be arrested,” police wrote in the warrant.

Frazee was eventually arrested about a week later, on Dec. 21 , at his Florissant home and police said for the first time they believed Berreth was no longer alive.

Frazee is scheduled to be arraigned in the case on April 5, where he is expected to enter a plea. A judge decided last month that prosecutors had shown there was enough evidence to bring the felony charges against Frazee to trial. Investigators started searching a landfill in Fountain last week for evidence connected to the case.

Stephanie Butzer contributed to this report.