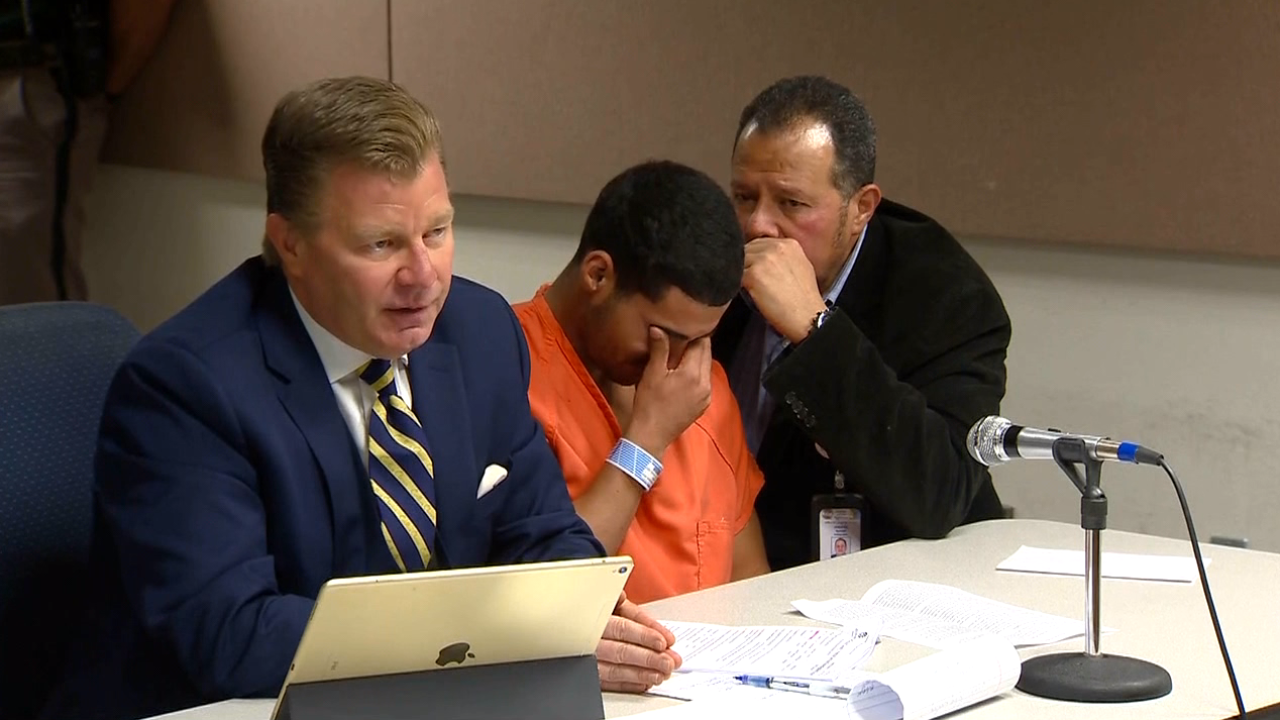 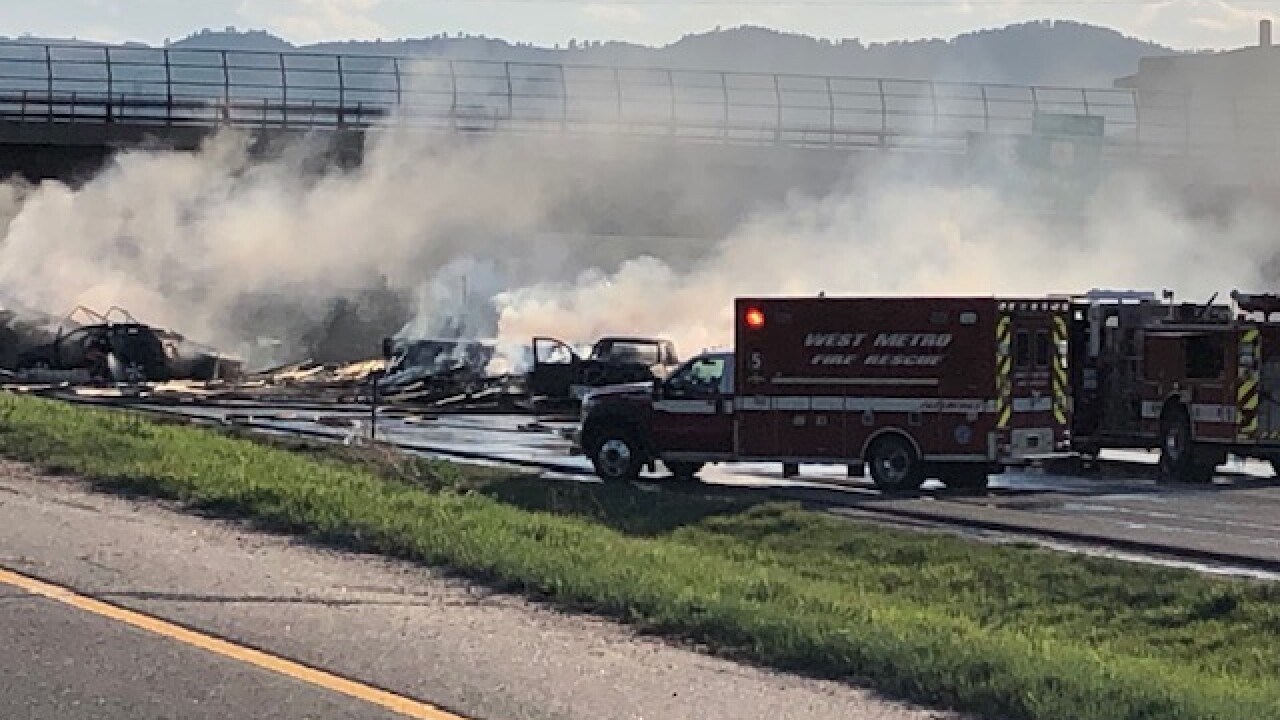 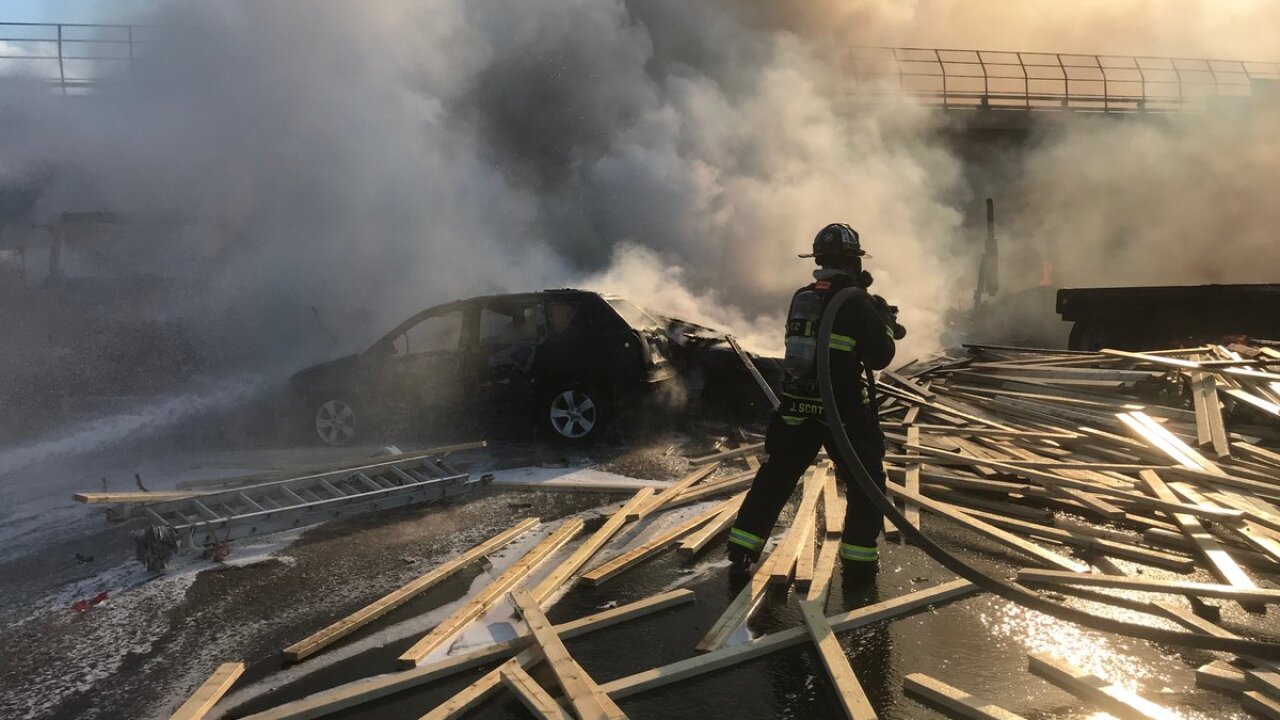 LAKEWOOD, Colo. — The 23-year-old semi driver accused of causing a fiery crash on Interstate 70 that killed four people and injured many others has been formally charged, about a week after the wreck.

Rogel Lazaro Aguilera-Mederos, 23, of Texas, was previously being held on investigation of four counts of vehicular homicide after the crash, but was formally charged on Friday morning.

First Judicial District Attorney Pete Weir said these charges are based, in part, on the facts from the probable cause affidavit, which was filed at the time of Aguilera-Mederos's arrest. Thirty-six of the 40 counts are felonies.

"We filed charges based upon our belief that Mr. Aguilera acted with extreme indifference," he said.

The 24 attempted assault counts stem from two dozen people who were involved in the collision, but "fortunately, by the grace of God" did not face serious bodily injury or death, Weir said.

Officials confirmed that this video, which shows a semi driver swerving across lanes and passing a runaway truck ramp on I-70, is Aguilera-Mederos prior to last week's crash. https://t.co/7T6Wg57Ybf pic.twitter.com/Sdk6rhKQVV

Witnesses would later tell police they saw the truck speeding around the Genesee exit, according to an arrest affidavit. They said the semi was driving all over the road, even forcing a pickup onto the shoulder at one point. Video from a witness shows the truck flying past an emergency runaway truck ramp. According to police, the driver had a “free and unobstructed” path to the ramp.

In an interview with police and through a translator, Aguilera-Mederos said he lost control of the vehicle after noticing his brakes were failing, but that he had only been traveling at 45 mph at the time. The downhill grade increased his speed as he entered Lakewood, he said. He didn’t want to drive off the road for fear of rolling the semi, so he tried to maneuver to the right shoulder and avoid the stopped traffic on I-70, according to the affidavit. But he saw the shoulder was blocked by another semi, so he swerved left — back into lanes of slow stop-and-go traffic from a previous crash at I-70 and Ward Road — and closed his eyes, according to the affidavit. The crash, which occurred around 4:50 p.m., caused a massive blaze in the eastbound lanes near Colorado Mills Parkway.

Aguilera-Mederos survived the crash and was taken to St. Anthony’s Hospital for his injuries.

The large fire and explosions at the site didn’t allow rescuers near the vehicles until about 10 p.m. Authorities said 28 vehicles were involved, including four semis.

Lakewood Police Chief Dan McCasky said he didn't believe the police department had ever investigated a crash like this before, but definitely not in the past 35 years he had worked there.

"It’s really devastated our community," he said. "It’s had a profound impact."

When it was safe to enter the scene, investigators found four “unidentifiable and unrecognizable” people who had been trapped inside their cars, according to the affidavit. Those four people were identified by the coroner’s office on Sunday as:
· Doyle Harrison, 61, of Hudson
· William Bailey, 67, of Arvada
· Miguel Angel Lamas Arrellano, 24, of Denver
· Stanley Politano, 69, of Arvada

According to a previous Denver7 report, Politano called his wife on his way home from work, saying, “I love you and I’ll be there in a minute,” before he died. His wife, Cathi Politano, said the outpouring of love in the wake of the tragedy has been unbelievable.

Multiple people who were near the crash when it occurred offered aid to those who were injured or trapped. A panhandler helped bring a woman to safety. A college student studying to become an EMT ignored her own injuries to help the driver in a car next to her, who would later thank the good Samaritan.

Aguilera-Mederos was taken into custody and was held on investigation of four counts of reckless vehicular homicide. Lakewood police said there was no evidence of drugs or alcohol in his system.

Lakewood police determined he had a valid commercial driver’s license from Texas and is in the U.S. legally with a green card. Aguilera-Mederos' brother, Daniel Aguilera, told CNN that Aguilera-Mederos is Cuban and is a permanent resident of the U.S. He said his brother told him after the crash that the brakes had failed.

Weir said the semi Aguilera-Mederos was driving was completely destroyed in the crash and fire, so authorities are not in a position to inspect it to see if the brakes were not working. However, there are other means that they can determine if the brakes had caused the crash, he said, though he did not elaborate.

Aguilera-Mederos was working for the Houston-based trucking company Castellano 03 Trucking LLC at the time of the crash. Over the past two years, the company has had 30 safety violations, including problems with brakes and a weak grasp of English, according to federal records. Twice in 2018, the drivers of one of the fleet’s trucks was found in violation of the rule that requires drivers to understand highway traffic signs and signals in English.

One of those violations read, “Driver cannot read or speak the English language sufficiently to respond to official inquiries.”

"This case continues to be investigated," Weir said. "It’s a complex case. There were a number of witnesses that have been spoken to and a number of witnesses we continue to seek out and interview. I went to thank all the law enforcement, first responders, CDOT, West Metro Fire — all the agencies that came together to assist in this horrific rash. And I think it’d be remiss if we didn’t acknowledge the heroes that live among us — our fellow citizens that came to the aid of those that were in jeopardy and tremendous distress. And there’s no telling how many people were saved by the actions of our fellow citizens, facing danger but acting to help somebody that needed their help. Remarkable, remarkable people."

Aguilera-Mederos will be advised of these charges Friday at 10 a.m. Weir said if they are successful in their prosecution, the man would look at "many, many, many years in prison."