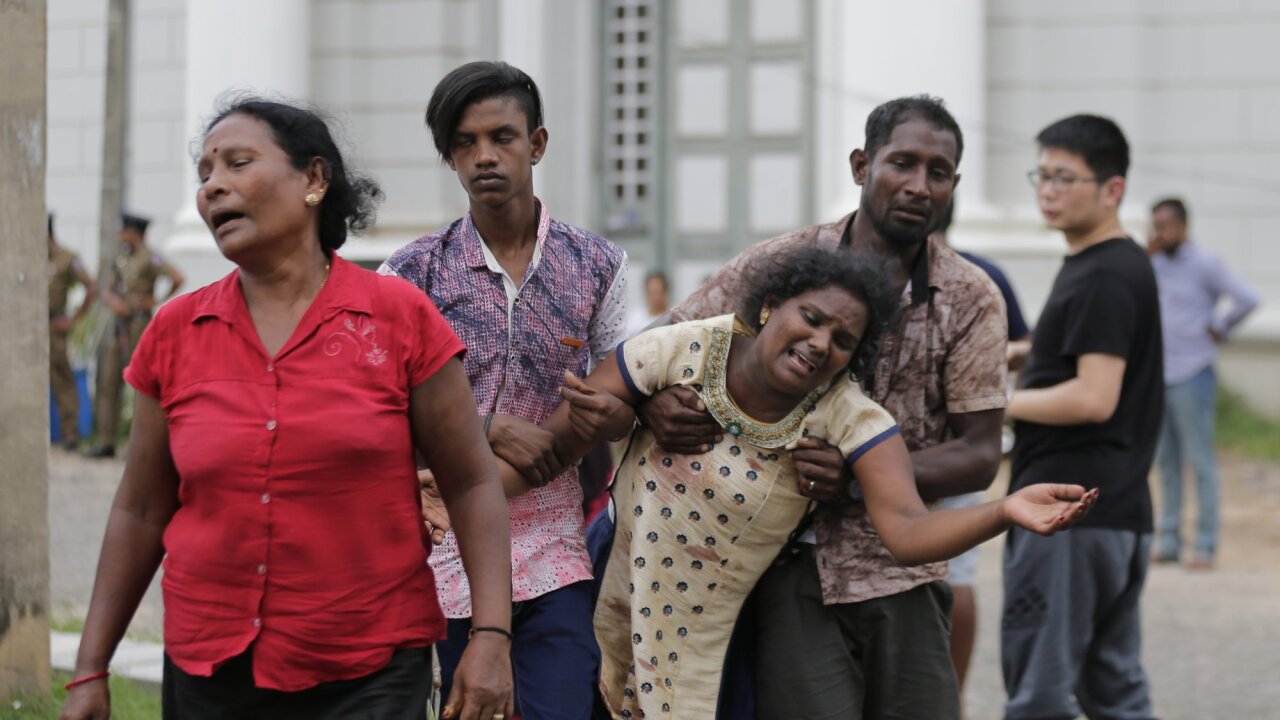 (AP Photo/Eranga Jayawardena)
Relatives of a blast victim grieve outside a morgue in Colombo, Sri Lanka, Sunday, April 21, 2019. More than hundred were killed and hundreds more hospitalized with injuries from eight blasts that rocked churches and hotels in and just outside of Sri Lanka&#39;s capital on Easter Sunday, officials said, the worst violence to hit the South Asian country since its civil war ended a decade ago.

Sri Lankan officials said they were temporarily blocking social media to curtail the spread of false information and ease tensions.

The defense ministry said the shutdown would extend until the government concludes its investigation into the bomb blasts that rocked churches and luxury hotels.

NetBlocks cautioned that such post-attack blackouts are often ineffective.

“What we’ve seen is that when social media is shut down, it creates a vacuum of information that’s readily exploited by other parties,” said Alp Toker, executive director of the London-based group. “It can add to the sense of fear and can cause panic.”

The group said its monitoring of Sri Lankan internet connectivity found no disruptions to the fundamental infrastructure of the internet, meaning the blackout was directed at specific services. Some social media outlets, such as Twitter, appeared unaffected, but the blockage affected popular messaging services.

“That’s going to be a problem for people trying to communicate with friends and family,” Toker said.

Some internet users are circumventing the social media blocks by using a virtual private network, which masks the location of a computer, Toker said.

It isn’t the first time Sri Lanka has blocked social media. The government imposed a weeklong ban in March 2018 because of concerns that WhatsApp and other platforms were being used to fan anti-Muslim violence in the country’s central region.

An analysis by Sri Lankan researcher and author Yudhanjaya Wijeratne of thousands of Facebook posts made during last year’s ban found that many Sri Lankans simply found ways around it. Wijeratne has recommended narrower and more “technically challenging” approaches to curbing hate speech, such as better detection and strengthening local laws.

Facebook, which owns WhatsApp and Instagram, has struggled in recent years to combat the use of its platforms to incite violence and spread hate messages and political propaganda in countries including India, Myanmar and the United States.

The company said in a statement Sunday that it has been working to support first responders and law enforcement in Sri Lanka and identify and remove content that violates company standards.

“We are aware of the government’s statement regarding the temporary blocking of social media platforms,” the company said. “People rely on our services to communicate with their loved ones and we are committed to maintaining our services and helping the community and the country during this tragic time.”

Google didn’t respond to a request for comment about the disruption to its YouTube service in Sri Lanka. Requests for comment made to messaging services Snap and Viber were not returned Sunday.