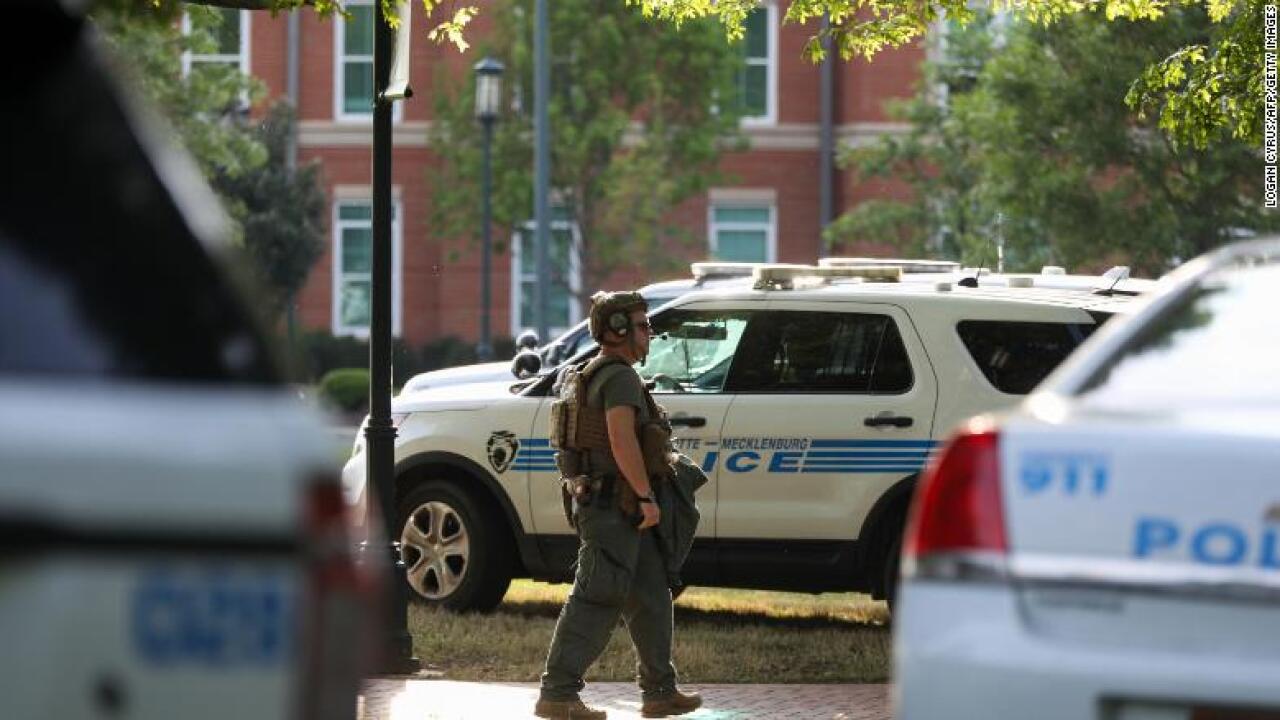 A man armed with a pistol opened fire on the final day of classes at the University of North Carolina at Charlotte, killing two people and leaving four others wounded -- three of them critically, authorities said.

Gunshots rang out just before 6 p.m. Tuesday as students waited for rapper Waka Flocka Flame's concert that evening while others prepared for exams later that week.

"Run, Hide, Fight," the university tweeted after it received calls on the shooting at the Kennedy building. "Secure yourself immediately!"

When officers arrived at the scene, they found multiple people with gunshot wounds on the campus. Police identified the suspect as Trystan Terrell, 22. He was taken into custody without incident.

As police led him away in handcuffs, he tilted his head back and smiled at the cameras.

Campus was on lockdown for hours

The campus remained on lockdown for hours as a familiar scene replayed at the latest shooting in the United States.

While authorities worked to clear the buildings and ensure there were no more shooters, panicked students crouched in halls as helicopters buzzed overhead. Officers escorted shell-shocked students out of buildings with their hands above their heads.

University officials sent an alert asking students to follow instructions from officers and warning others to stay away from campus until they received an all clear.

"If you have not contacted your family, please do so," the campus tweeted.

He started shooting during presentations

Tristan Field said the gunfire started while he was in class.

Monifa Drayton, an assistant vice president at Atrium Health, told CNN affiliate WBTV that she was walking into the building to teach a class when gunfire rang out. Terrified students dashed outside the building, and she helped lead them to a nearby parking deck.

"The children were absolutely petrified," Drayton said. "And I also sat and waited with a gentleman whose girlfriend ... was in the library. And at that point the library doors had been shot out and she was in there barricaded."

The shooting happened days after a gunman opened fire at a synagogue near San Diego, killing a woman and wounding several others.

"I can't tell you the sadness of the entire community to know that a situation like this has occurred on our campus," UNCC Police Chief Jeff Baker said. "We are all pretty much devastated."

Officers were nearby when gunfire started

When the initial reports of a shooting came in at 5:42 p.m., officers were close by getting their assignments and a briefing for the Waka Flocka concert. The rapper later said that he was safe and nowhere near the campus.

An officer quickly went to the room where the suspect had fired from, disarmed him and took him into custody, Baker said. At the time of his arrest, the suspect was armed with a pistol, he said.

The suspect did not say a word while he was being handcuffed. "Right now, he is not somebody (who) was on our radar," Baker said.

The shooting occurred on the last day of classes. The exams were set to begin Thursday, but they were canceled through the end of the week.

"This is the saddest day in UNC Charlotte's history," NCC Chancellor Philip Dubois said in a statement. " ... The unthinkable happened on our campus ... an individual opened fire in a UNC Charlotte classroom, cutting short the lives of two members of our community and seriously injuring four others."

Frustrated officials decried yet another shooting at a campus in the United States.

"I am so sorry for these young people and their families. We fail as a nation when we fail to protect our children. You deserve better," she tweeted.

Dubois said authorities will identify the two people killed once their relatives have been notified.

At the apartment complex where the suspect lived, residents watched as police entered a unit believed to be his and stayed for hours.

"It's alarming. It's kind of scary. It's surreal. You know, you hear about these types of things that happen, unfortunately, all around the country," neighbor Harold Lloyd told CNN affiliate WCCB. "You never would think that it would occur, well that the person apparently who did it lives in the same building as you."

The campus in the state's largest city has about 30,000 students.