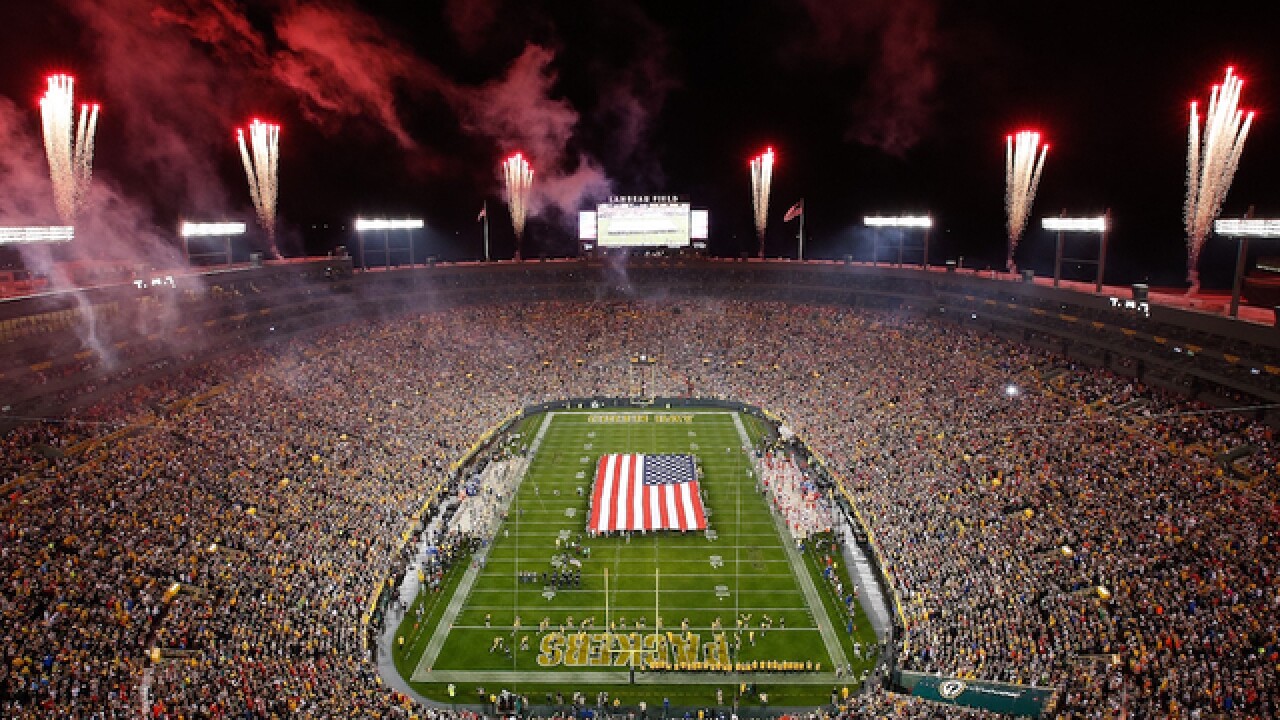 Copyright Getty Images
Joe Robbins
<p>The national anthem is sung prior to the NFL game between the Green Bay Packers and the Kansas City Chiefs at Lambeau Field on September 28, 2015 in Green Bay, Wisconsin. (Photo by Joe Robbins/Getty Images)</p>

As many NFL fans question the patriotism of kneeling NFL players, the spotlight is now turning to the fans themselves.

The Green Bay Packers handed out small American Flags during the Packers-Lions Monday Night Game, as part of the NFL's Salute to Service Military Campaign.

"During the National Anthem, everybody was waving (their flags) and singing," Marine veteran Tegan Griffith told WTMJ.  "It made me feel very good."

However, by halftime, Griffith says she and her fellow veterans noticed many of the flags were discarded.

"We started noticing people leaving (flags) on the ground, next to food wrappers and beer cups," Griffith explained.  "We found a couple on the bathroom floor.  The veterans I was with started to get a little upset."

After the game, the flags were seen everywhere.

"It looked like red, white, and blue confetti," described Phil Olson, a season ticker holder.  "People were walking all over them.  It struck me as unpatriotic."

After the game, both Olson and Griffith told WTMJ they spotted several fans picking up the extra flags.

"I'm going to tell the Packers they they shouldn't hand out flags because it's the wrong venue," Olson said. "Every game, the Packers will give out a souvenir with the Packers logo on it.  Everybody takes the (souvenir) home.  But after this game, hardly anybody wanted the American flag."

The Packers released a statement on the matter:

"We distributed more than 77,000 United States flags as part of the Salute to Service theme of the game. We were particularly pleased with how they contributed to the festive atmosphere of the game, especially during the national anthem. We received a lot of positive feedback. We often have fan giveaways and this one was very popular. Our stadium- and guest-services teams picked up any flags they noticed on the ground."

After the #SaluteToService game at Lambeau. How NOT to respect the American Flag. I am ashamed. CC: @NFL @packers @nflcommish #DETvsGB #MNF pic.twitter.com/TYLnHWgyJo

Some fans helped pick up the flags.

Dear @Lions & @ShowtimeTate,
A group of veterans met one of your fans at Lambeau Field and I would really love to hook him up for his positive citizenry. Can you help? Thank you! #OnePride #SaluteToService pic.twitter.com/uACU8DDVWa