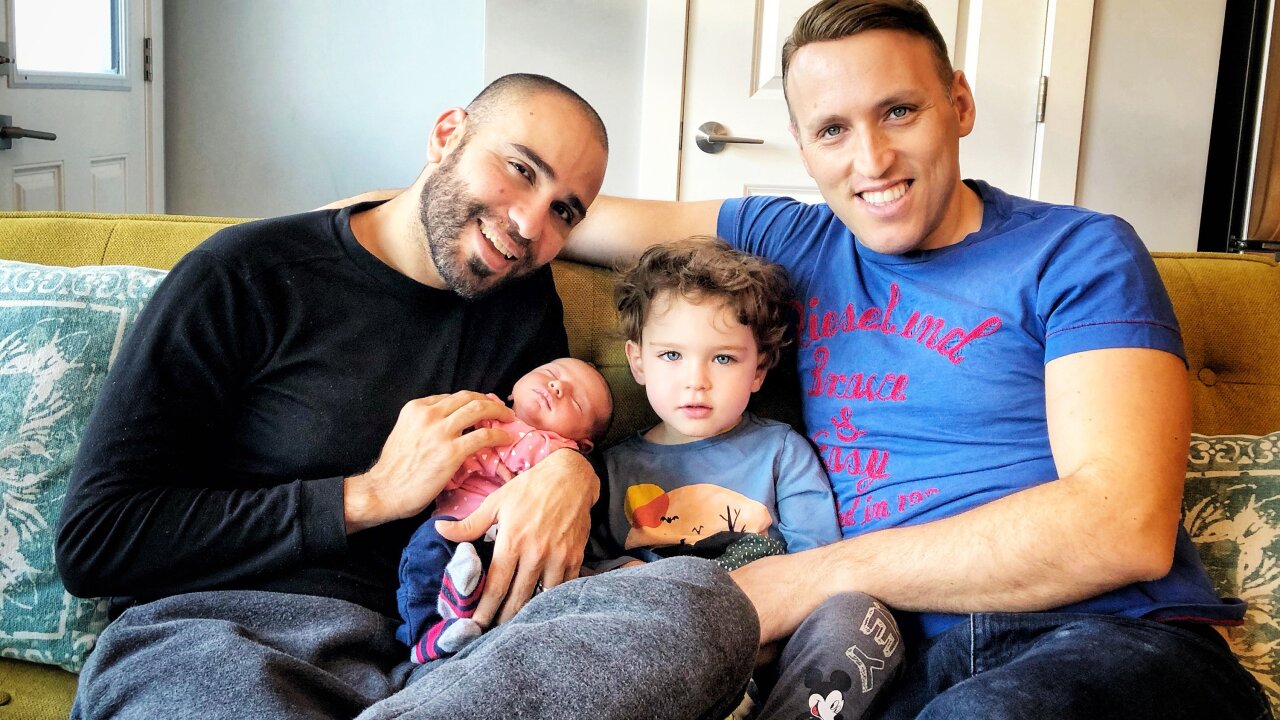 Roee and Adiel Kiviti have been married almost six years and live in the United States. They are both American citizens, as is their 2-year-old son, Lev. However, they say their infant daughter, Kessem, has been denied birthright citizenship under a State Department policy that considers her "born out of wedlock" — and they're not the first LGBT family to be affected by the policy under the Trump administration.

Both children were born in Canada using an egg donor and a surrogate mother. The Kivitis told CNN's Brianna Keilar that it was "a straightforward procedure" to obtain Lev's US passport. This was not the case when they sought to do the same for Kessem in early May.

"We're a family of four people where three have American citizenship and a 2-month baby that the State Department is refusing her a right to a birthright citizenship," Adiel Kiviti said.

The Kivitis said it initially seemed that their daughter's passport application would be processed under the policy for children born abroad of two US parents. However, they were later told her application had been flagged for surrogacy. Under the State Department policy on "assisted reproductive technology," "a child born abroad to a surrogate, whose genetic parents are a U.S. citizen father and anonymous egg donor, is considered for citizenship purposes to be a person born out of wedlock." When asked for comment on the Kivitis' story, a State Department official directed CNN to this operational guidance.

The Kivitis said they were asked to provide additional documentation like surrogacy and residency papers.

"Our position was and remains that we should be treated as a married couple and the minimal requirements that are in that regulation should be applied to us as well," Roee Kiviti told CNN in a separate interview. "Any additional requirements beyond that are discriminatory."

He thinks they should be processed under INA301(c) which applies to US children born in wedlock to two US citizen parents.

'This is an affront on American families'

Roee Kiviti told CNN that it is not just LGBT families who should be concerned about the policy.

"I think especially after the Supreme Court ruling (legalizing same-sex marriage nationwide), there's no such thing as gay marriage. There's marriage. We are a family," he said.

"This is not an affront on LGBT families. This is an affront on American families, and it should worry everyone," Roee Kiviti said.

A number of Democratic politicians have expressed outrage at the Kivitis' story, which was first reported in The Daily Beast.

House Speaker Nancy Pelosi said in a statement Friday that the policy "is an unconscionable attack on American families and violates our Constitution."

"No matter how hard the President and his Administration may try, they cannot change the meaning of family or what it means to be an American," the California Democrat said.

"I call on the State Department to immediately end this shameful discrimination and treat all families with dignity and equality," the New York Democrat said in a statement Thursday.

The Kivitis told CNN that they have not yet received the official letter rejecting Kessem's application but that they've been told it will be denied. Once that happens, they said, they plan to pursue legal action.

A federal judge recently ruled in favor of another same-sex couple who faced a similar hurdle under the State Department's surrogacy policy.

The judge ruled in February that the State Department statute does not contain language "requiring a 'blood relationship between the person and the father' in order for citizenship to be acquired at birth."

The State Department appealed that ruling last week. It said it does not comment on pending litigation.