Trump and White House are silent amid McCain news 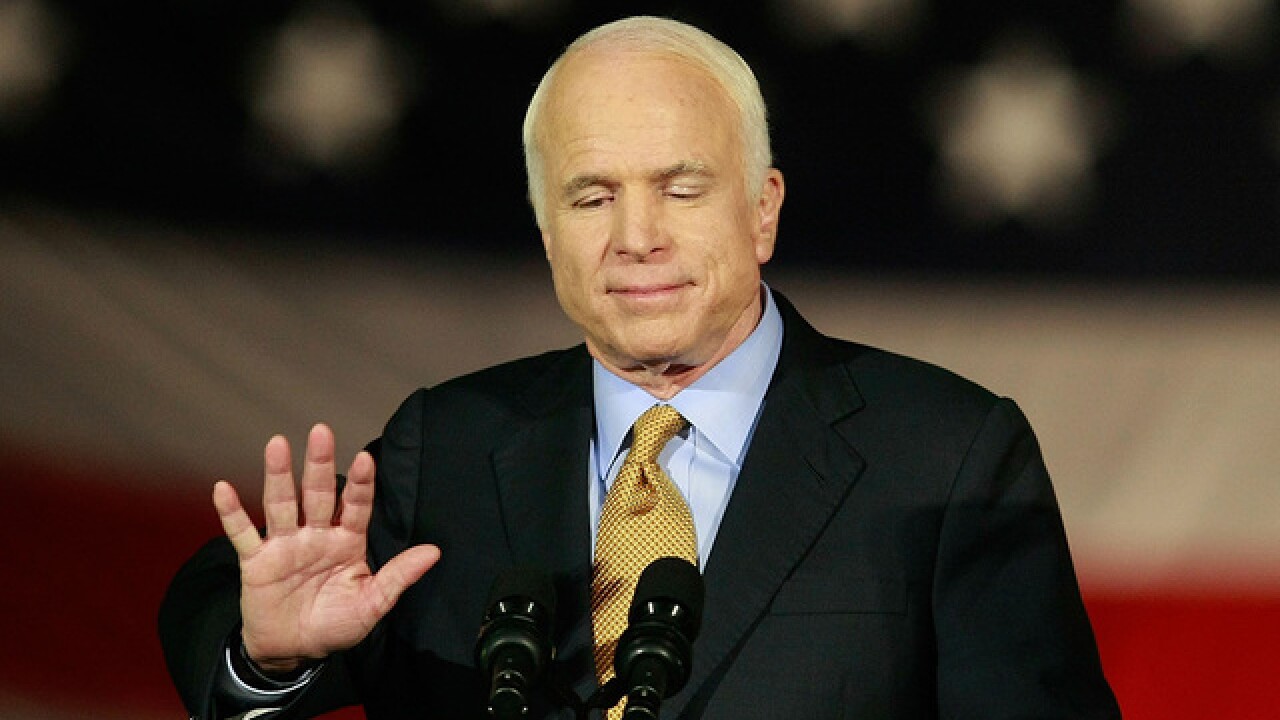 When Sen. John McCain's family announced Friday that he was ending medical treatment for aggressive brain cancer, the news shook Capitol Hill and prompted support from his Republican and Democratic colleagues alike. But one prominent voice was missing: President Donald Trump's.

The White House press office did not react to the news, and when Trump traveled to Ohio in the evening he did not mention the ailing senator in a nearly hour-long speech to Ohio Republicans, which ran a gamut of topics from the death of Mollie Tibbetts to NFL protests to Kanye West.

In past months, Trump has frequently referenced McCain's 2017 health care vote on the campaign trail without naming him, drawing the ire of the Arizona Republican's family.

"One of our wonderful senators said 'thumbs down' at 2 o'clock in the morning," the President said at a campaign event for New York's Rep. Claudia Tenney earlier this month.

Although Trump claimed the Senate was one vote away, in reality the vote was only to go to conference with the House on the Senate's "skinny repeal" of Obamacare.

The President did not repeat that reference, which has become a familiar refrain in his stump speech, on Friday evening.

Trump also did not mention McCain at a signing ceremony earlier this month at Fort Drum, New York, for a defense spending bill the senator had spearheaded, the John S. McCain National Defense Authorization Act.

Trump expressed support for McCain when the senator's tumor was first diagnosed.

"Senator John McCain has always been a fighter," the President said in a statement at the time. "Melania and I send our thoughts and prayers to Senator McCain, Cindy, and their entire family. Get well soon."

And before that health care vote, the President called McCain an "American hero" in a tweet.

Speaking to reporters on the South Lawn of the White House last December, Trump said he had talked with the senator's wife.

"I did speak to Cindy McCain, and I wished her well. I wished John well. They've headed back, but I understand he'll come if we ever needed his vote, which hopefully we won't. But the word is John will come back if we need his vote, and it's too bad," Trump said.

The two have had a tortured relationship and McCain, who was diagnosed with glioblastoma, an aggressive form of brain cancer, in July 2017, has been one of the administration's most outspoken Republican critics.

Trump has previously attacked McCain's record of service, saying the Vietnam veteran and one-time prisoner of war is "not a war hero" because he was captured.

"He is not a war hero," Trump told pollster Frank Luntz, who was hosting a July 2015 question-and-answer session at the Family Leadership Summit in Ames, Iowa.

"He is a war hero," Luntz interjected.

Trump has since acknowledged that McCain is a hero, but he refused to apologize in subsequent interviews.