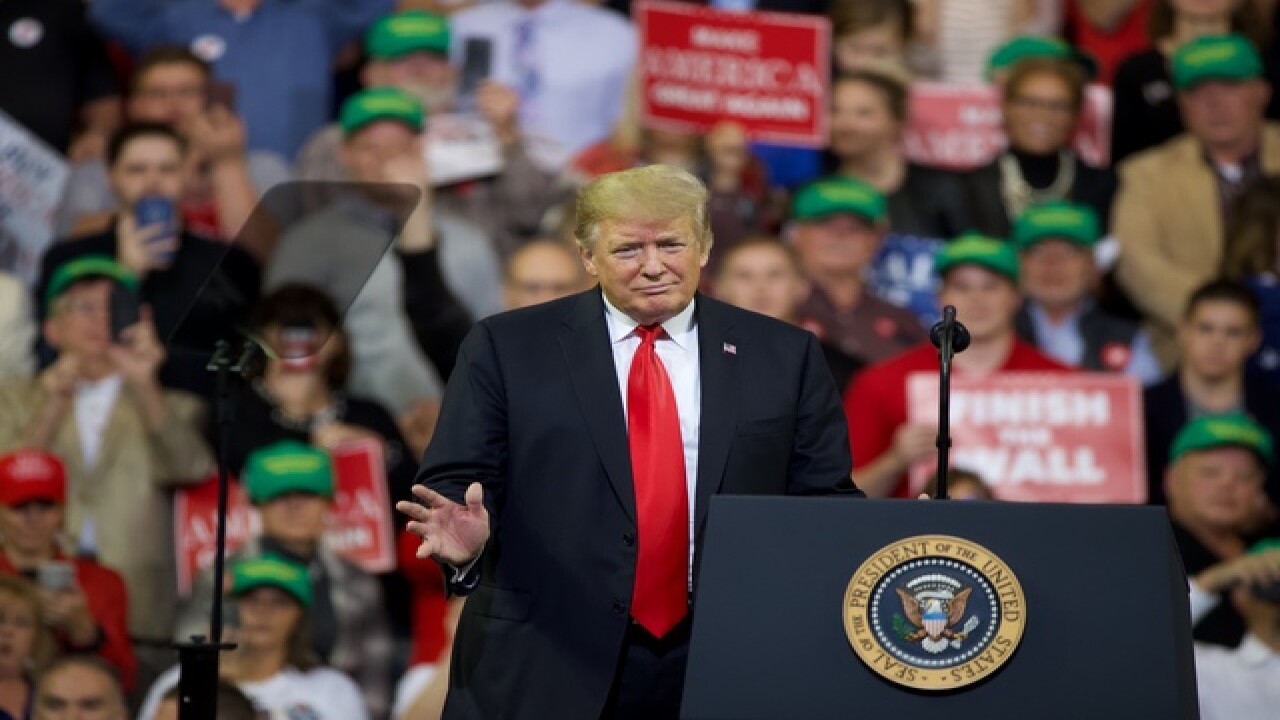 President Donald Trump touted the end of Robert Mueller's investigation during his first appearance before supporters since its completion during a rally in Grand Rapids, Michigan, Thursday night.

The rally follows a chaotic week in Washington, precipitated by Attorney General Bill Barr's letter to Congress on the special counsel's report. Trump and the White House have touted Barr's summary as a political victory, claiming that the report exonerated him entirely .


"The collusion delusion is over. The special counsel completed its report and found no collusion and no obstruction. Coulda told you that two and a half years ago very easily," Trump said, calling the report's findings "total exoneration" and "complete vindication."

Trump is correct that Barr's letter to Congress said Mueller's team of investigators "did not establish that members of the Trump campaign conspired or coordinated with the Russian government in its election interference activities."

However, Trump falsely claimed that the report said there was no obstruction. Barr's letter, directly quoting the Mueller report, clearly states that "while this report does not conclude that the President committed a crime, it also does not exonerate him" on questions of obstruction.

Mueller said he had thoroughly investigated the obstruction question, though he didn't interview Trump in person and the written questions he submitted to the President did not address obstruction.

Barr and Rosenstein chose not to prosecute. They decided that they couldn't press a case against Trump because they determined his actions did not meet the standards for prosecuting such a case.

Trump also lambasted Democrats and the media for the investigation Thursday.

"You know it's interesting, Robert Mueller was a god to the Democrats, was a god to them until he said there was no collusion. They don't like him so much right now. The crazy attempt by the Democrat Party and the fake news media right back there and the deep state to overturn the results of the 2016 election have failed," Trump said, later referring to Democrats as "mega losers."

He called the special counsel's investigation into interference in the 2016 election a "sinister effort to undermine our historic election victory and to sabotage the will of the American people."

Earlier in the day, Trump had focused on a variety of topics as he headed into campaign mode, including immigration and health care.

On Monday night, the Justice Department reversed its approach on court action on the Affordable Care Act, saying in a filing with a federal appeals court that former President Barack Obama's signature domestic legislation should be entirely struck down.

Though Republicans haven't presented a clear, viable alternative to Obamacare, Trump on Tuesday touted his administration's push to make health care the center of the national political debate.

"The Republican Party will soon be known as the party of health care," he told reporters ahead of a meeting with Republican senators.

On Thursday morning, he turned to immigration, tweeting: "Mexico is doing NOTHING to help stop the flow of illegal immigrants to our Country. They are all talk and no action. Likewise, Honduras, Guatemala and El Salvador have taken our money for years, and do Nothing. The Dems don't care, such BAD laws. May close the Southern Border!"

Hours later, his Department of Homeland Security secretary tweeted her gratitude to the Central American countries for their assistance.

"I would like to extend my profound gratitude to our Central American allies Honduras, Guatemala & El Salvador -- as well as @usembassyhn and @USAmbHonduras -- for their commitment to our common cause of secure borders & more orderly migration flows," DHS Secretary Kirstjen Nielsen tweeted.