What to know about the white nationalist rally in Washington, D.C. 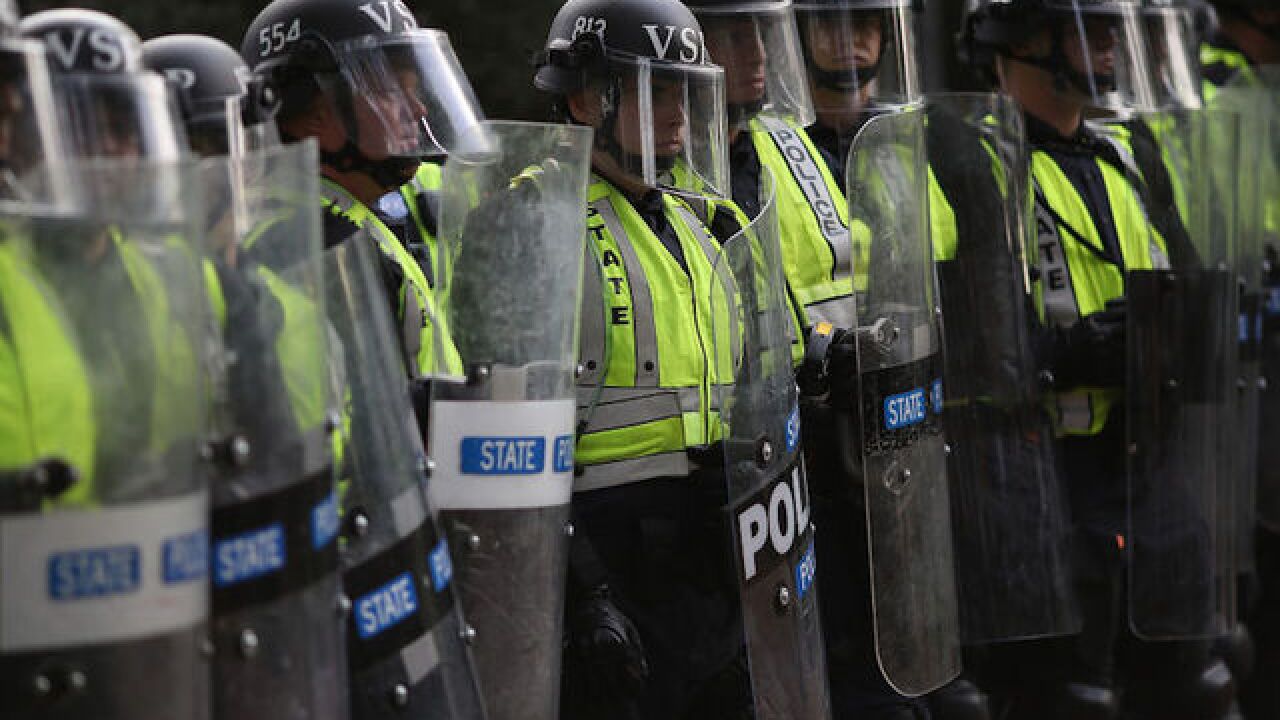 Image copyright 2018 Getty Images. All rights reserved. This material may not be published, broadcast, rewritten, or redistributed.
Win McNamee
<p>Members of the Virginia State Police stand guard in riot gear on the campus of the University of Virginia during an event marking the one year anniversary of a deadly clash between white supremacists and counter protesters August 11, 2018 in Charlottesville, Virginia. </p>

One year after a white nationalist rally in Charlottesville, Virginia, left a counterprotester dead, the event's organizer is producing an encore.

On Sunday, demonstrators are set to hold a "white civil rights rally" on the anniversary of last year's "Unite the Right" protest.

This time, supporters plan to gather in a much more high-profile setting: Lafayette Square park, directly across the street from the White House.

Here's what you need to know:

When will this happen?

A march is to begin at 5 p.m. ET Sunday from Washington's Foggy Bottom subway station to Lafayette Square park, according to the "Unite the Right 2" website.

How many people could show up?

The organizer expects a maximum of 400 attendees, according to the permit application.

This weekend's event is expected to draw white nationalists, neo-Nazis and Ku Klux Klan supporters, just like the first event in Charlottesville.

But similar far-right protests have been dwarfed by counterprotesters. That's what happened last year at the original "Unite the Right" rally and at a July 2017 Ku Klux Klan gathering in Charlottesville, where Klansmen were outnumbered 20-to-1.

What is this protest about?

Organizer Jason Kessler, who also organized last year's "Unite the Right" rally, said in his permit application that this weekend's event is a "white civil rights rally." He also said the event is meant to protest "civil rights abuse in Charlottesville Va."

Kessler has not responded to CNN's requests for comment for more details about this weekend's event.

What happened in Charlottesville?

"The statue itself is symbolic of a lot of larger issues," Kessler said last year. He said those issues include free speech, preserving history against "revisionism," combating political correctness and advocating for white interests.

Fistfights and screaming matches broke out, and the rally officially was called off. But scuffles continued, and the violence culminated when a car plowed into a group of counterprotesters, killing 32-year-old Heather Heyer.

Members of 40 anti-racism groups plan to protest near Lafayette Square. For example, the Shut It Down D.C. Coalition is producing a "Still Here, Still Strong" rally to counter "Unite the Right 2" starting at noon Sunday.

The group said it is "organizing marching bands, drummers, puppets, and vibrant displays of art and culture to show the diversity and power of united communities in the face of right-wing violence."

And the "Rise Up Fight Back Counter-Protest" hosted by Black Lives Matter DC is due to take place between 2 and 7 p.m. Sunday, a block away from the "Unite the Right 2" rally.

Outside Washington, "anti-racist" activists plan to rally in Charlottesville, home of the University of Virginia. Kibiriti Majuto, an organizer with UVA Students United, encouraged everyone to join student leaders in promoting diversity and tolerance rather than white supremacy.

"We want to see students, activists and members of the global community rising up to fight fascism in their universities, local communities, and all institutions that uphold white supremacy and fascism," Majuto said. "C-ville fights back, and we are asking the world to fight back, too!"

What are police doing about security?

Charlottesville authorities came under criticism last year for underestimating the potential for violence, and they're trying to mitigate conflict this year. States of emergency have already been declared for both Charlottesville and the Commonwealth of Virginia ahead of this weekend's rally, about 115 miles away in the nation's capital.

In Washington, Police Chief Peter Newsham said his officers will keep the "Unite the Right 2" protesters and the counterprotesters separate.

Newsham said no guns will be allowed near the rally sites, even if someone has a legal carry permit. Newsham said Washington law allows police to ban guns from certain areas when they deem it necessary.

"Our role is to make sure we have a First Amendment event that goes on without any types of violence or destruction of property," Newsham said, according to CNN affiliate WTOP.

"We've had those types of high-tension assemblies in the District before. We 100% are going to make sure that groups remain separate."