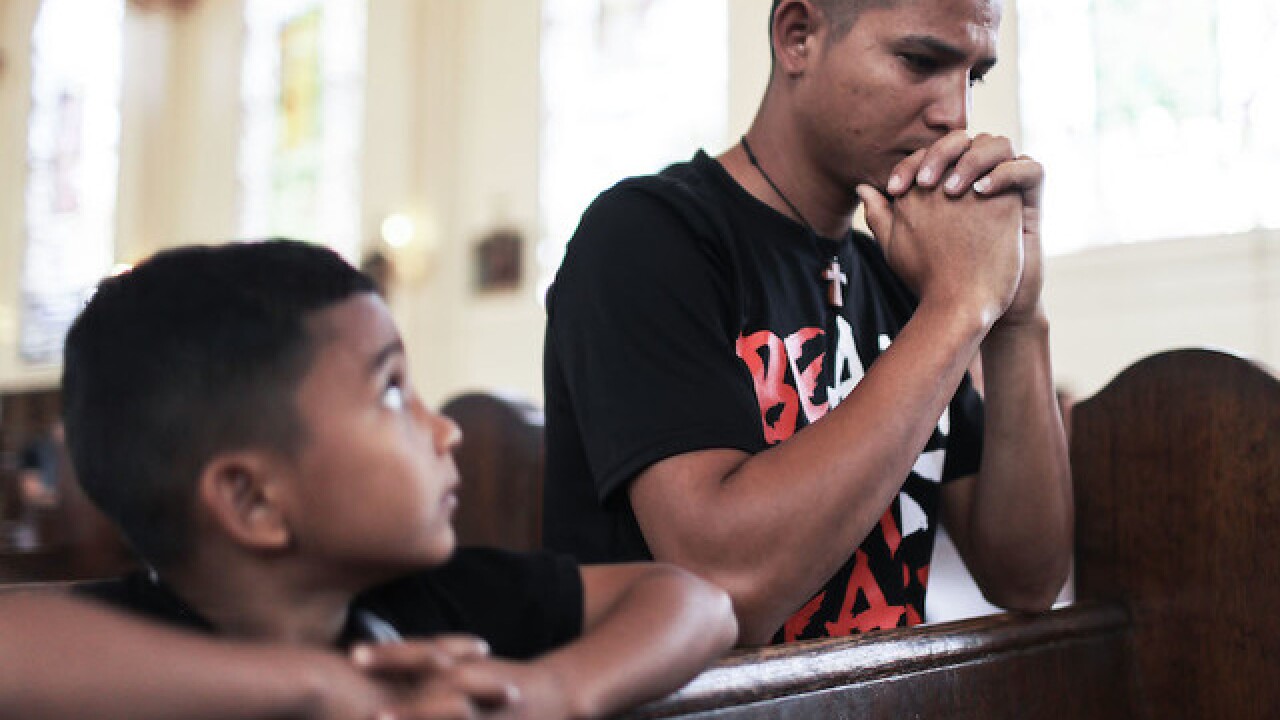 Image copyright 2018 Getty Images. All rights reserved. This material may not be published, broadcast, rewritten, or redistributed.
Mario Tama
<p>Honduran father Juan and his six-year-old son Anthony worship during Sunday Mass on September 9, 2018 in Oakland, California. They fled their country, leaving many family members behind, and crossed the U.S. border in April at a lawful port of entry in Brownsville, Texas seeking asylum. They were soon separated and spent the next 85 days apart in detention. Juan was sent to Tulsa, Oklahoma, while his son was sent to a detention shelter New York. They were one of almost 2,600 families separated due to the Trump administration's 'zero tolerance' immigration policy.</p>

Some 220 children from separated families remain in custody, four months after a judge ordered the US government to reunite the immigrant families it split up at the border.

And 14 of those children were only just added to the list the government uses to track reunifications, officials revealed in court documents filed late Thursday night.

The acknowledgment that more families were separated than previously reported is likely to spark concern from advocates, who've frequently questioned the accuracy of the government's record-keeping in the aftermath of the family separation crisis.

A review of records prompted the Office of Refugee Resettlement to add 14 more children to its tally, the court filing said. Government attorneys said they've "been careful to re-evaluate and refine the numbers" as they learn new information.

The numbers appear in the latest federal court filing in the American Civil Liberties Union's class-action case over family separations. They come as a caravan of migrants, which includes many families, treks through Mexico, bound for the US border -- and as the Trump administration considers a new pilot program that could result in the separations of kids and parents once again.

"Given the lack of a plan or system to keep track of families, it's no surprise the original numbers were inaccurate," said Lee Gelernt, deputy director of the ACLU's Immigrants' Rights Project and the lead attorney in the case.

Advocates have warned that inaccurate statistics could have serious consequences, prolonging family separations and making it harder for the public to track the government's progress in complying with the court's order.

Officials have stressed that the numbers are constantly changing, and attorneys are still debating them as they meet to sort out the next steps. Meanwhile, the statistics released in the case's regular court filings offer one of the few public windows into the reunification process.

The filing shows some progress in the reunifications -- a painstaking effort that has stretched for months as officials tracked down parents who were deported without their children and coordinated repatriation flights. More than 40 children have been discharged since the last status report in mid-October, and officials said 47 more are on track to be released.

But most of the kids from separated families who remain in custody -- more than 75% -- will not be reunified with their parents either because the parents have declined reunification or because officials have deemed reunification cannot occur since the parent is unfit or poses a danger, the filing said.

Most of the about 220 children from separated families who remain in custody have parents who were removed from the United States -- 151 children, according to the latest government tally.

Of those, 10 children are currently in the pipeline to reunite with their parents in their countries of origin, according to court documents. Deported parents of 118 kids in custody have said they don't want their children to be returned to the countries of origin. For the remaining children, it has not yet been established whether parents want to reunify or decline reunification.

An additional approximately 70 children who remain in custody include 22 whose parents are in the United States but have chosen not to be reunified with their children as well as 33 whose parents have been deemed unfit to be reunified. That tally also includes 11 children the US government is working to discharge who have parents in the United States. The government says three other children can't be reunited with parents who are in the country at this time because there are red flags for safety or a parent is in criminal detention.

In June, US District Judge Dana Sabraw ordered the government to reunite most of the families it had divided, including parents and children who had been separated as a result of the government's now-reversed "zero tolerance" policy at the border and some separations that occurred before that policy was put in place.

Since then, 2,104 children have been discharged from government custody and reunited with parents, and 300 others were discharged "under other appropriate circumstances," according to Thursday's court filing.

Judge has outlined a new time frame for updates, reunification

Last week Sabraw laid out a new time frame for the reunification effort and updates to the court. The judge said he hoped the reunification process would come to a close by November 9, the date of the next status hearing in the case.

"I will ask that counsel continue to work, as you have, expeditiously and collaboratively. And see if we can bring the reunification process to a close within this time frame," Sabraw said.

Gelernt, the ACLU attorney, cautioned that November 9 isn't a hard deadline so much as a hopeful goal from the judge.

"There is no deadline on the reunifications, unfortunately," he told reporters last week. "Obviously, the court had deadlines. Those were blown. At this point we're just sort of working to do it as quickly as possible."

Government attorneys said in their court filing Thursday night that they're on track to meet the judge's expectations.