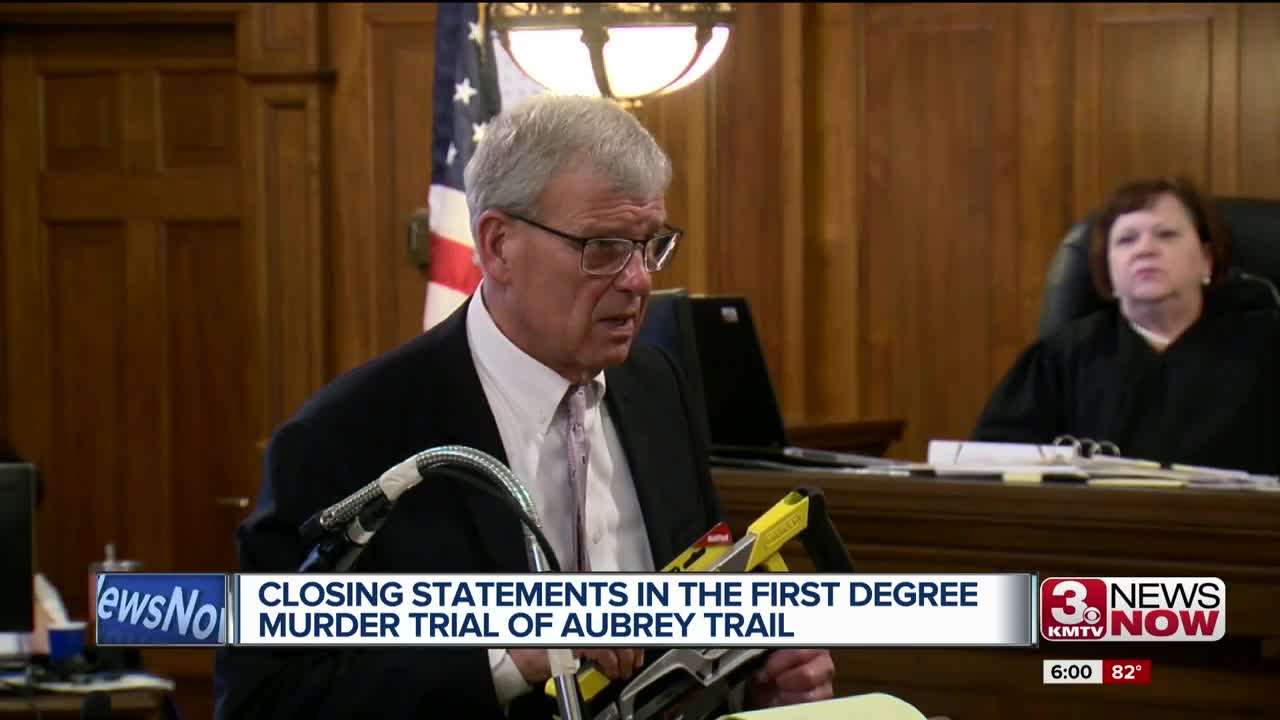 Testimony and closing statements come to an end...the jury deliberates a verdict.

WILBER, Neb. (KMTV) — It’s up to the jury to figure out whether Aubrey Trail is guilty or not...beyond a reasonable doubt of murdering 24-year-old Sydney Loofe. Senior Reporter Jake Wasikowski explains how prosecutors say Loofe was killed.

For the first time, prosecutors reveal the grisly details of what they think happened to Sydney Loofe inside that Wilber apartment in November 2017.

Both sides give their closing statements in the first-degree murder trial of Aubrey Trail. Prosecutors say the premeditation was clear through video of what Trail and Boswell did the day Loofe was killed.

“Bailey Boswell and Aubrey Trail...how did they prepare for the date? They buy a hacksaw, they buy drop cloths, they buy bleach, they buy all the evidence you need to kill and dispose of a body,” says Mike Guinan of the Nebraska Attorney General’s Office.

They believe Loofe was lured to the apartment to smoke weed and was ambushed in the living room and was choked with force.

“She fought, she did not survive. This death was up close...it was personal,” Guinan says. He goes on, “Strangled her face-to-face, eye-to-eye...squeezed the life out of her.”

Prosecutors say Trail and Boswell put up drop cloths creating a makeshift room to keep blood and evidence from spreading when they cut her up. The defense argued that the only evidence authorities have that Loofe was killed in Wilber was what Aubrey Trail told them...and their murder theory isn't based on evidence.

Prosecutors say Trail and Boswell trended towards murder because of all the witchcraft, torture and killing talk with his previous "girls."

“These people weren’t practicing witchcraft. Did you ever hear anyone of them saying they went to a witchcraft meeting,” says Defense Attorney Joe Murray.

The defense argued that experts didn’t testify that the new hacksaw purchased was used to dismember Loofe’s body...so there was no premeditation. Prosecutors say Aubrey’s stories about explicit sexual acts before her death with people she just met makes no sense at all.

Guinan says “He changed his story about the death of Sydney Loofe in front of your eyes...so who’s credible?” “Absolutely common sense.”

The jury may be in deliberation until 8 p.m. tonight. If they haven't reached a verdict, deliberation may continue tomorrow.

You can find all of our coverage of the Aubrey Trail trial at the following link: https://www.3newsnow.com/news/the-aubrey-trail-trial