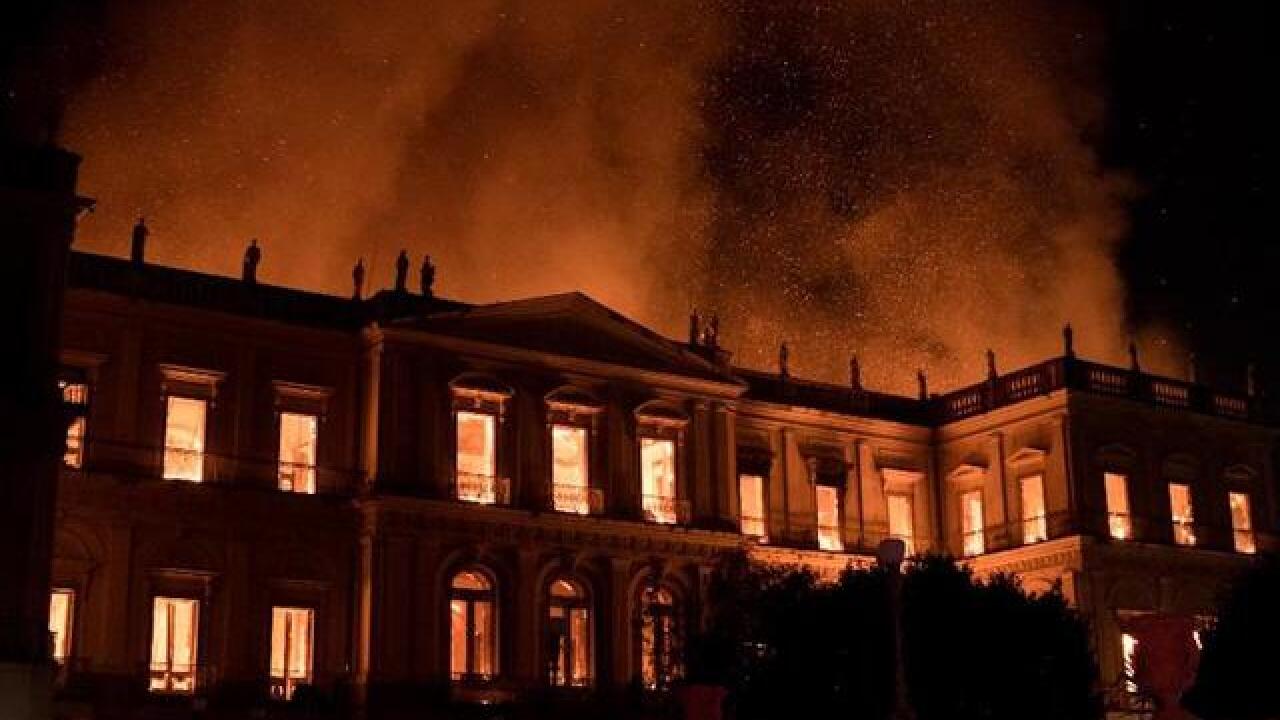 More than 20 million pieces of history, including Egyptian mummies and historic artwork, may have been destroyed.

"The loss of the National Museum's collection is insurmountable for Brazil," President Michel Temer tweeted.

No one knows what sparked the blaze around 7:30 p.m. Sunday. Firefighters worked through the night to battle the flames, but a museum official said the damage is already "irreparable."

"Very little will be left," preservation director Joao Carlos Nara told Agencia Brasil. "We will have to wait until the firefighters have completed their work here in order to really assess the dimension of it all."

So far, no serious injuries have been reported. Most of the human toll came in the form of grief and tears as employees, researchers and academics flocked to the scene in Rio de Janeiro.

Many of them cried as they watched flames consume the building. Marco Aurelio Caldas, who worked at the museum for nine years, was overcome by the loss.

"This is 200 years of work of a scientific institution -- the most important one in Latin America," he told Agencia Brasil.

"Everything is finished. Our work, our life was all in there."

The palatial National Museum building used to be the home of a Portuguese royal family. Almost exactly 200 years ago, it was converted into a museum.

Since then, the National Museum has become Brazil's oldest historical institution and an internationally prominent research center.

"Two hundred years of work, research and knowledge were lost," President Temer said after the fire. "It's a sad day for all Brazilians."

The museum housed 20 million artifacts in areas such as biological anthropology, archeology, ethnology, geology, paleontology and zoology, according to its website.

One of the museum's most famous artifacts is known as "Luzia," the skull and bones of a 25-year-old woman who died more than 11,000 years ago. They are the oldest remains ever discovered in Brazil, the museum's website says.

The largest meteorite ever found in Brazil is also housed in the museum. It weighs 5.36 tons and was found in 1784.

Other rare exhibits include thousands of works from the pre-Colombian era, such as mummified Andean skeletons.

Brazilian Ministry of Culture Sergio Sa Leitao said the country "is in mourning."

"I have also asked for a complete evaluation of the fire preparedness conditions of every other federal museum in the country," he said, "in order to verify the steps that need to be taken to avoid another tragedy."