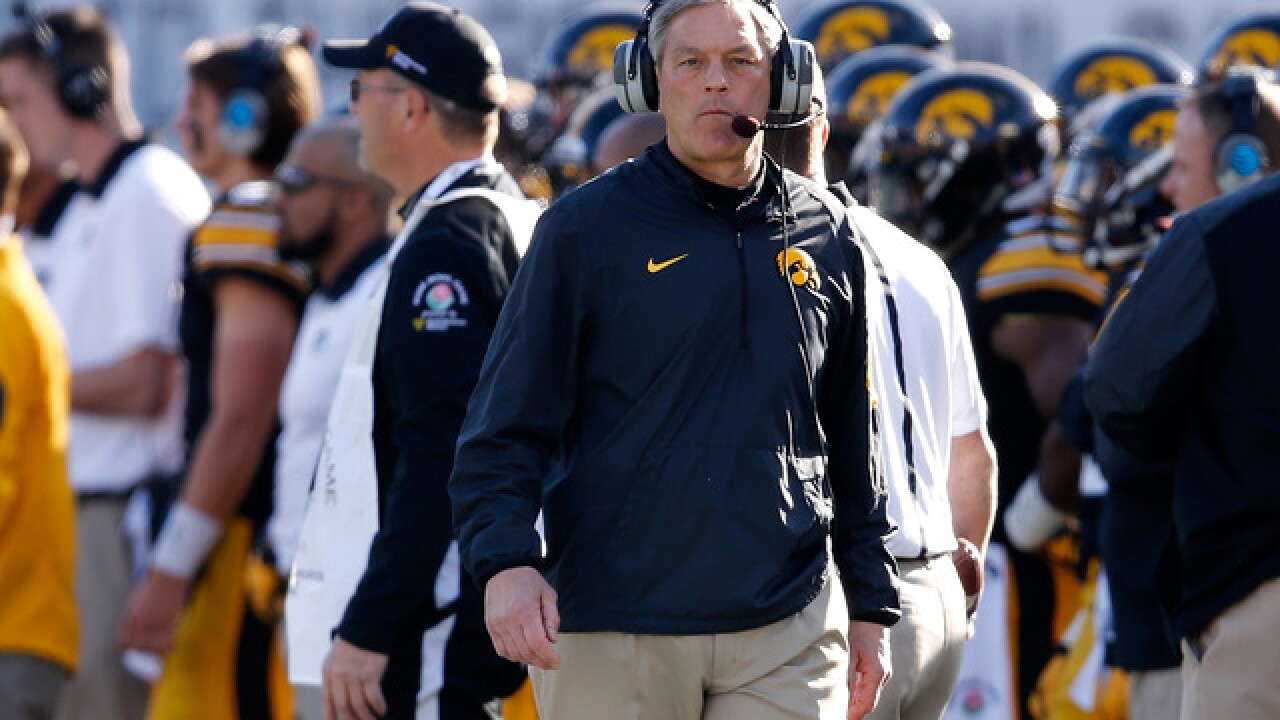 Sean M. Haffey
<p>PASADENA, CA - JANUARY 01: Head coach Kirk Ferentz of the Iowa Hawkeyes on the sidelines in the 102nd Rose Bowl Game against the Stanford Cardinal on January 1, 2016 at the Rose Bowl in Pasadena, California. (Photo by Sean M. Haffey/Getty Images)</p>

NEW YORK (AP) - Drake Kulick fought for a 1-yard touchdown run late in the fourth quarter on his only carry of the game and Iowa beat Boston College 27-20 in the frigid Pinstripe Bowl on Wednesday night at Yankee Stadium to snap a five-game bowl losing streak.

The Hawkeyes (8-5) had been the only team in the nation to lose a bowl game in each of the last four seasons. Iowa had last won a bowl game in 2010 and started the losing streak the next season.

It ended in New York.

The Hawkeyes used their first sack of the game late in the fourth to spark the winning drive. Iowa defensive end Anthony Nelson hit Darius Wade, and Parker Hesse recovered a fumble at the BC 45.

Nate Stanley's pass to Nate Wieting on a rollout was ruled a touchdown until a review showed the tight end was down at the 1. No worries. Kulick got the call over 1,000-yard rusher Akrum Wadley and barged through for the go-ahead score. The smattering of Iowa fans went wild and Josh Jackson gave them reason to stay on their feet when he sealed the win with an interception.

Boston College (7-6) had nothing on its final drive and that ended an otherwise miserable day at Yankee Stadium. The Yankees' postseason games in October seemed downright balmy compared to the kickoff temperature of 23 degrees and a wind chill that made it feel like 12 degrees. The frozen stadium turf forced players to change from cleats to sneakers to get some grip and the most common huddle was the one around the sideline heaters.

Boston College's AJ Dillon found the field just to his liking, and ripped off a 66-yard run in the second quarter and had 126 yards rushing overall in the first half. He had a 4-yard TD run in the first quarter. His monster half helped the Eagles hold a 281-56 edge in total yards, a staggering discrepancy that made little impact on the scoreboard.

The Hawkeyes had two clutch plays that kept it close: Iowa safety Jake Gervase intercepted a pass on the third play of the game and returned it to the BC 6. The Hawkeyes got a field goal. And Wadley returned a kickoff 72 yards that led to a touchdown on Stanley's 8-yard TD pass to Noah Fant. With a short field, Iowa was stout and kept it at 17-10 at halftime.

Wadley scored on a 5-yard run in the third and Miguel Recinos and Colton Lichtenberg swapped field goals in the fourth to make it 20-all with 8:09 left in the game.

Boston College: The Eagles are still trying for their first eight-win season since 2009.

Iowa fans ended the first quarter with "The Wave." Iowa fans at Kinnick Stadium turn and wave to patients at the University of Iowa Stead Family Children's Hospital, a 12-story building that sits right across the street. On game days, patients and their families can watch the game and, after the first quarter, wave back. The Hawkeyes kept the tradition going at Yankee Stadium.

TAKE ME OUT TO THE BOWL GAME

The Yankees remain committed to hosting the Pinstripe Bowl at Yankee Stadium. The Iowa-Boston College matchup was the eighth Pinstripe Bowl and Yankees president Randy Levine said the game has become part of New York's holiday tradition. Boston College sold its entire allotment of roughly 7,500 tickets and the game announced a crowd of 37,667. But the frigid temps kept fans out of the seats and the stadium was sparsely populated in the second half. "I think the bowl game is stable," Levine said. "This is part of our calendar."

Boston College QB Anthony Brown watched the game dressed in his jersey from the press box. Brown was the starting QB and threw for 11 touchdowns until he injured his right leg in November and was ruled out of the season.

Boston College: The Eagles return a nice chunk of their starting offense and should again contend for another seven-win season. Under coach Steve Addazio, the Eagles have had four seven-win seasons in his five years at BC.