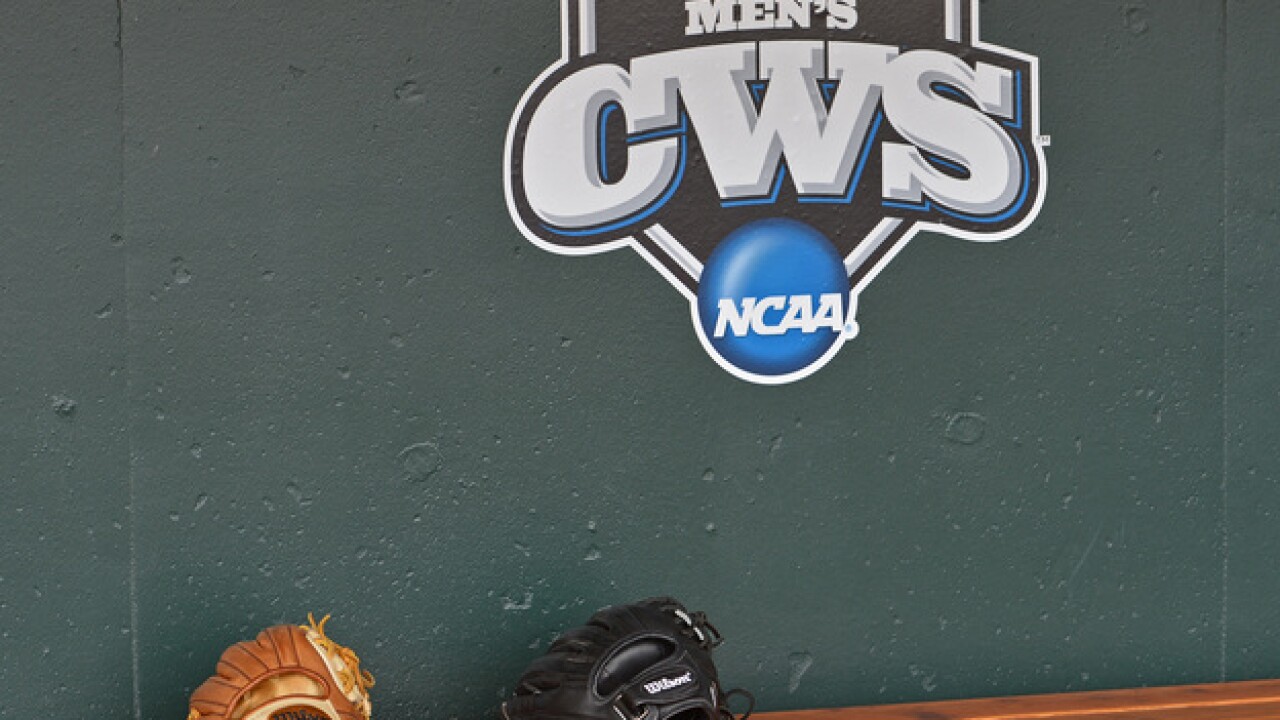 Arkansas scored four fifth-inning runs against a faltering Luke Heimlich and moved a step closer to its first national championship in baseball with a 4-1 win over Oregon State in Game 1 of the College World Series finals Tuesday night.

The finals opener, delayed a day because of rain, seemed to have a little bit of everything - a fly ball lost in the sun that went for a ground-rule double, a runner interference call against Oregon State and an overturned foul call on a ball hit down the right-field line.

Then there was the sudden collapse of Heimlich, who looked so good, and then so bad.

After failing to get out of the third inning in both of his previous CWS starts, the Beavers' ace was in full command while striking out five and limiting the Razorbacks (48-19) to one hit through four innings.

In the fifth, though, the senior left-hander issued a walk, hit two batters, gave up two hits and got a bad break when second baseman and first-round draft pick Nick Madrigal fumbled the ball trying to make a throw.

Arkansas starter Blaine Knight (14-0) went back to the mound with a 4-1 lead, pitched another inning and left having allowed seven hits with six strikeouts. Barrett Loseke and Matt Cronin combined to pitch three scoreless innings of relief.

Michael Gretler's base hit in the second put Oregon State (53-12-1) up 1-0. The Beavers looked ready to add to the lead when Arkansas left fielder Heston Kjerstad lost Trevor Larnach's fly in the sun and it bounced over the fence for a ground-rule double.

Adley Rutschman was on first and Larnach on third when Tyler Malone grounded to first and Jared Gates threw to second to start a double-play attempt. Rutschman ducked as he approached the bag  - rather than sliding or peeling off away from the play - and was called for interfering with shortstop Jax Biggers. It was ruled a double play, Larnach was ordered back to third base, and Knight struck out Gretler to end the inning.

The play seemed to swing the momentum Arkansas' way.

Heimlich (16-3) issued a walk and gave up back-to-back singles for the Razorbacks' first run in the fifth. Heimlich then hit two straight batters to bring home another run. Arkansas extended its lead to 3-1 after Madrigal's bobble trying to throw to second on a grounder.

Arkansas fans serenaded Heimlich with the "Calling the Hogs" chant as he walked to the dugout after getting pulled with the bases loaded. Christian Chamberlain came on and walked the first batter he faced, making it 4-1. Chamberlain struck out 11 in 4 2/3 innings but also walked five.

The Beavers missed on chances to cut into the lead.

Cadyn Grenier hit a ball down the line that right-field umpire Barry Chambers called foul in the fifth. The ball was ruled fair after a video review, putting runners on first and third, but Madrigal lined out to end the inning.

In the seventh, Zak Taylor was thrown out at second trying to stretch a single into a double.

Heimlich's first two appearances in Omaha didn't draw much reaction from the crowd other than cheers from Oregon State supporters. That was mostly the case again Tuesday, though there were scattered boos when he was introduced before the game and a woman behind the Arkansas dugout stood and gave a thumbs-down with her right hand.

Last year, Heimlich left the team before the CWS when it was revealed he had pleaded guilty to molesting a young relative when he was 15. The university allowed him to return to the team this year. He served two years of probation and went through a treatment program but denied wrongdoing in recent interviews with Sports Illustrated and The New York Times.

Steven Kwan, Oregon State's All-Pac 12 center fielder, was in the starting lineup for the first time since injuring his left hamstring June 18. The Cleveland Indians' fifth-round draft pick had pinch hit in two games and played one inning in the field prior to returning to the lineup Tuesday.