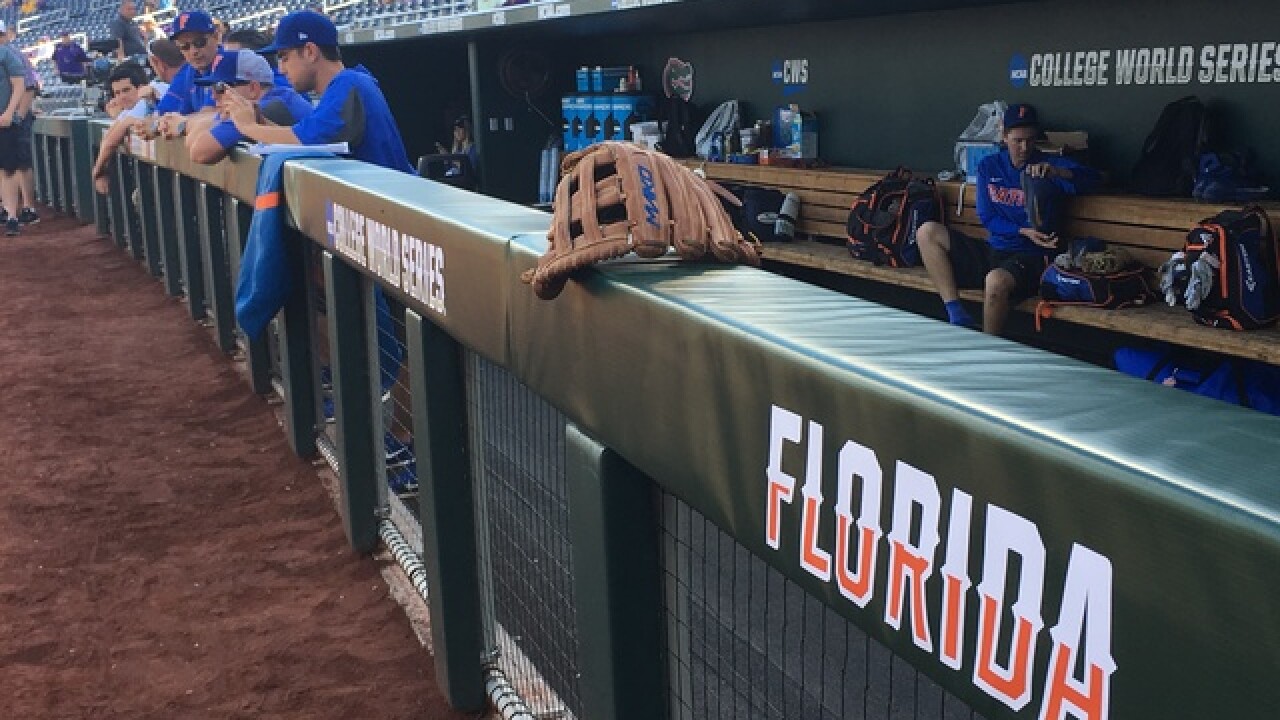 Jackson Kowar struck out a career-high 13 in 6 2/3 innings, Jonathan India hit a three-run homer and defending national champion Florida eliminated Texas from the College World Series with a 6-1 win on Tuesday.

Kowar (10-5) held the Longhorns scoreless on five hits, mixing his changeup with a fastball still touching the mid-90s deep into his season-high 121-pitch afternoon.

The Kansas City Royals' first-round draft pick struck out the side in the third and sixth innings and broke his previous high of 11 Ks he set against TCU in the CWS last year. He became the first pitcher with 13 strikeouts in a CWS game since 2010 and, according to ESPN, the first in 40 years to do it in fewer than seven innings.

India, the No. 5 overall pick by the Cincinnati Reds, singled to make it 1-0 in the first inning and he broke the game open with his three-run homer in the sixth.

Texas starter Blair Henley (6-7) struggled with his control and lasted only 2 2/3 innings, the second-shortest of his 22 career starts. He gave up four hits, walked four and threw a wild pitch.

Florida (48-20) came into the game after a 6-3 loss to Texas Tech in its CWS opener. The Gators had committed 16 errors in their last 11 games and had batted .186 and scored a total of eight runs in their previous three games.

The Gators played error-free against the Longhorns, and their offense had 10 hits.

Kowar didn't allow a base runner past second until the seventh, when Jake McKenzie singled leading off and ended up at third on Masen Hibbeler's double with none out. Kowar struck out Tate Shaw and Ryan Reynolds and left to applause from both Florida and Texas fans. Jordan Butler came on and struck out David Hamilton.

Chase Shugart took over for Henley and kept it a 1-0 game until there were two outs in the sixth. Nelson Maldonado's RBI single came before India's 21st home run of the season made it 5-0. Nick Horvath homered for Florida in the eighth.

Texas (42-23) broke through for a run in the eighth on DJ Petrinsky's one-out single.

The Longhorns struck out a season-high 15 times against Kowar, Butler and Michael Byrne, the most for the program since fanning 17 times against TCU in 2017.

Florida plays another elimination game Thursday against the loser of the Tuesday night game between Arkansas and Texas Tech. The Gators still need three wins to reach the best-of-three finals for the second year in a row.

The season is over for Texas, which lost 11-5 to Arkansas on Sunday and went 0-2 at the CWS for only the sixth time in its record 36 appearances.