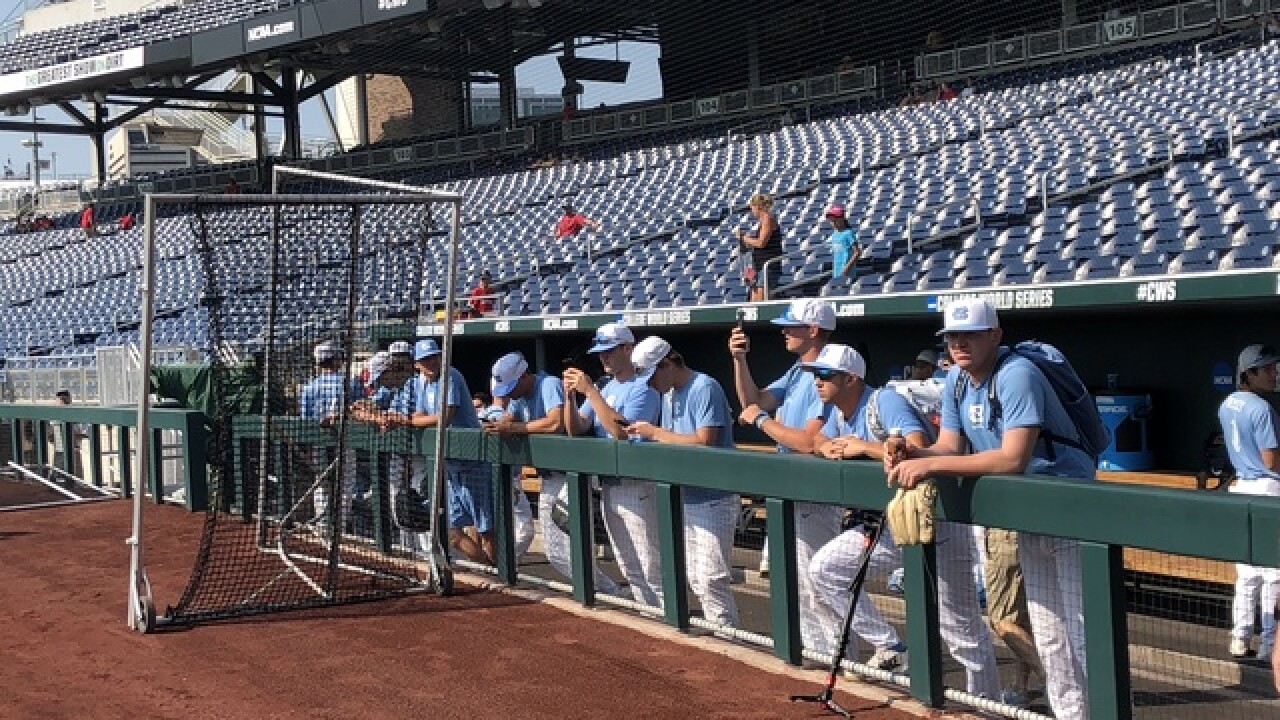 Copyright 2018 Scripps Media, Inc. All rights reserved. This material may not be published, broadcast, rewritten, or redistributed.
<p>North Carolina taking in the sights during the open practices before the 2018 College World Series.</p>

North Carolina knocked out Oregon State ace Luke Heimlich during a five-run third inning and went on to beat the Beavers 8-6 on Saturday in the opening game of the College World Series.

The Tar Heels (44-18) used six pitchers in a 4-hour, 24-minute slog in 95-degree heat that was the longest nine-inning game in CWS history.

They turned back threats from one of the nation's most potent offenses in the sixth and seventh innings and prevailed against an opponent they hadn't faced since losing to the Beavers in the 2006 and '07 CWS finals.

Ashton McGee and Ben Casparius, North Carolina's Nos. 8 and 9 batters, combined to drive in five runs as the Tar Heels built leads of 6-1 and 8-4.

Oregon State (49-11-1) was poised to go ahead in the seventh after loading the bases with two outs against Josh Hiatt and Steven Kwan coming to bat. Kwan had reached base on his first four trips to the plate and had struck out only 15 times in 247 at-bats, making him one of the toughest players in the nation to strike out. Cooper Criswell came on and struck him out on three pitches.

The Beavers were uncharacteristically sloppy while losing their third straight game over two years in Omaha. Carolina scored on a passed ball, and the Beavers committed three errors after making one in their first five NCAA Tournament games.

Last year, Heimlich left the team for super regionals and the CWS after it was revealed he had pleaded guilty to molesting a young relative when he was 15. The university allowed him to return to the team this year. He served two years' probation and went through a treatment program but denied wrongdoing in recent interviews with Sports Illustrated and the New York Times.

There was no discernible negative crowd reaction during pregame introductions; Oregon State fans behind the third-base dugout loudly cheered Heimlich.

The first two Carolina batters reached base each of the first three innings, and the senior left-hander was charged for the Tar Heels' first six runs. He hit three batters, walked one and struck out two in his shortest outing since going 2 1/3 innings against Southern California on May 21, 2016.

Oregon State got three runs back in the third to pull to 6-4 and had a chance to pull closer or take the lead in the sixth with runners on first and second. But Carolina shortstop Ike Freeman jumped high to snare Cadyn Grenier's liner, and he threw back to second to double off pinch runner Preston Jones.

Caden O'Brien (7-0), the second Carolina pitcher, worked 1 2/3 innings for the win. Criswell pitched the last 2 1/3 innings for his first save.

North Carolina starter Gianluca Dalatri threw only 15 pitches before leaving with two outs in the first inning. Dalatri had missed 12 weeks with a street reaction in his right (throwing) elbow and was making his fifth start since May 19. Velocity on Dalatri's fastball was off, and he signaled for a mound visit after he walked Adley Rutschman. Dalatri reported no pain but said his pitches didn't have much life on them.

Third-base umpire Barry Chambers found himself in the middle of two plays. He couldn't get out of the way of Zack Gahagan's ground ball in fair territory in the third inning, turning what would have been an RBI single down the line into an infield hit that scored nobody for Carolina. In the seventh, he called Carolina's Brandon Martorano safe at third when TV replays clearly showed Michael Gretler tagged him out after taking Steven Kwan's throw from center field. Martorano ended up scoring on a base hit to make it 8-4.

Also in the seventh, second base umpire Jeff Henrichs had to go to the ground to avoid getting hit in the head when Carolina center fielder Brandon Riley threw the ball in after a hit.