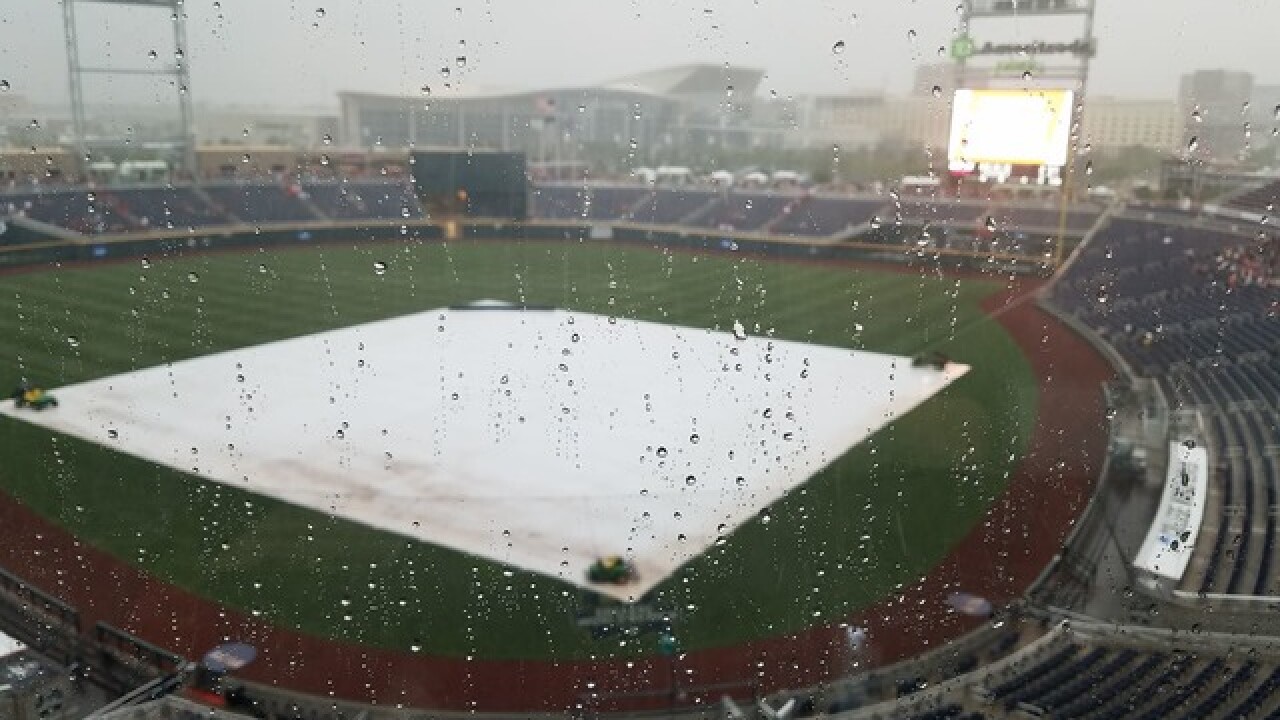 Copyright 2018 Scripps Media, Inc. All rights reserved. This material may not be published, broadcast, rewritten, or redistributed.
<p>Sunday's weather delay at the College World Series had many fans angry. Unfortunately, it looks like we could see more delays later this week. </p>

UPDATE: The 1 p.m. game between Oregon State and Washington is now in a weather delay. Click here for updates on when play will resume, and the new start time for the 6 p.m. game.

Sunday's College World Series matchup between Texas and Arkansas started with the sunny skies and high temperatures we all associate with an Omaha summer. Then came the storm, followed by a delay in play.

If you blinked you would have missed it, because it was in and out of the area around TD Ameritrade Park in what seemed like 30 minutes.

However, the delay lasted for two hours and 49 minutes. Many of the fans took to Twitter to air their frustrations.

The 3 hour rain delay for the 10 min storm and MS State “Rebels” along with the ground crew behavior should prove there is some incompetence leading this CWS. Oh yeah and the person who played music during a pitch today too.

@NCAACWS #cws that rain delay was dumb. 5 minutes rain and 2.5 hours delay? CRAZY! Let’s get this moving. Someone has a bedtime you know

#cws if you want people to spend money and endure Omaha heat you had better figure out the dumb weather delay restart procedure. It was sunny for 3 hours and the ground crew and teams could have been much more efficient . DUMB and OVERLY risk adverse! Babies!

The NCAA rule regarding weather delays requires a 30 minute delay following the last lightning strike within an eight-mile radius of the stadium. If there is another strike, the clock resets.

We understand your frustrations with the delay of game. We want to play ball too!! However, our weather policy requires us to wait 30min after any lightning strike within an 8-mile radius. We do this for the safety of players, fans, workers and everyone at a stadium.

Unfortunately, it looks like we could see more delays in this year's College World Series, even as early as tonight.

Let's hope @cws_groundscrew ate their @wheaties because they'll be putting the tarp on and off more than they might like this week. Best chance for a storm over @tdameritradeprk each day will be in the afternoon and evening. #CWS #CWS2018 #CWS18 #Omaha @3NewsNowOmaha @OSIsports pic.twitter.com/3XtBSEadD4

Check back with our weather team for updates on storm chances throughout the week.