Quinn's Corner: All is NOT well in Chicago 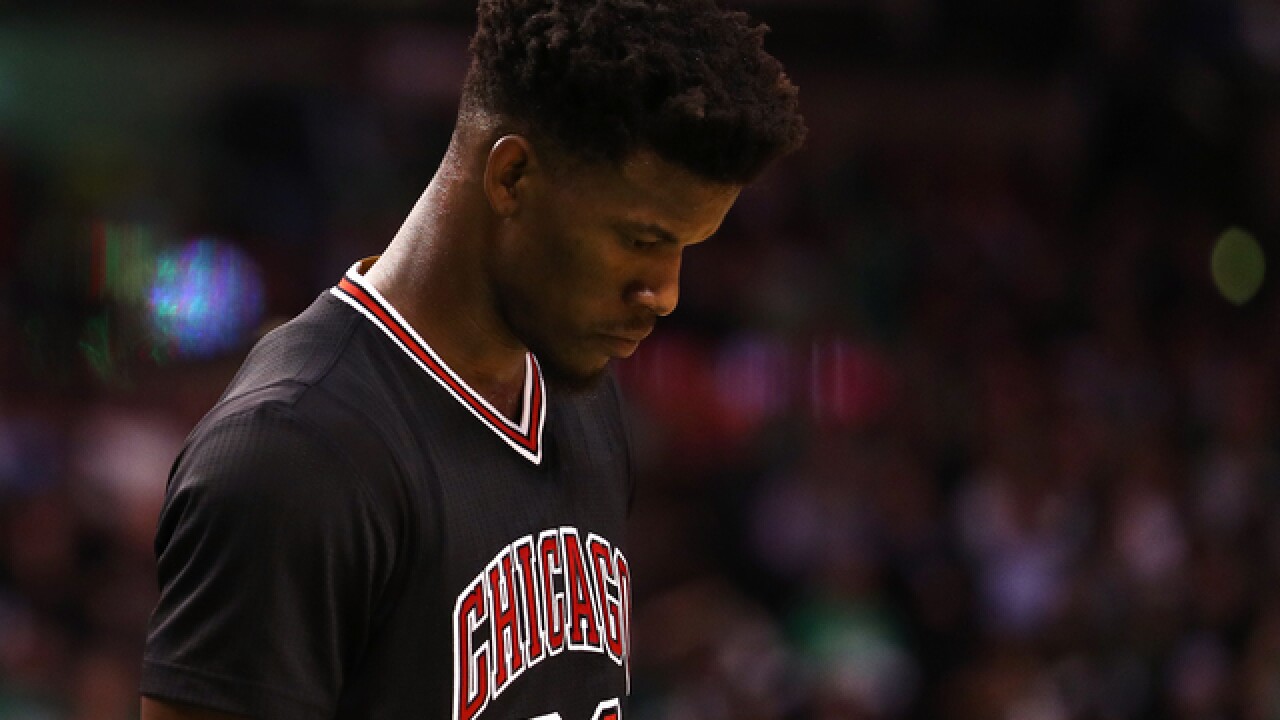 Copyright Getty Images
Maddie Meyer
<p>BOSTON, MA - APRIL 26: Jimmy Butler #21 of the Chicago Bulls looks on during the third quarter of Game Five of the Eastern Conference Quarterfinals against the Boston Celtics at TD Garden on April 26, 2017 in Boston, Massachusetts. NOTE TO USER: User expressly acknowledges and agrees that, by downloading and or using this Photograph, user is consenting to the terms and conditions of the Getty Images License Agreement. (Photo by Maddie Meyer/Getty Images)</p>

There are sure to be plenty of "winners" and "losers" after Thursday night's NBA draft in Brooklyn.

And truthfully, only time will tell which teams will actually come out ahead.

But one team that surely didn't have the night it's fans were hoping for was the Chicago Bulls.

Chicago started out the evening by trading their one bona-fide star, Jimmy Butler, to the Minnesota Timberwolves for a seemingly underwhelming package centered around athletic wing Zack LaVine. Though LaVine has shown plenty of promise, he's coming off an ACL injury that caused him to miss most of last season.

The Bulls also received former Providence PG Kris Dunn, who struggled mightily in his debut NBA campaign, and the #7 overall pick from the Wolves in exchange for Butler and the #16 pick (more on that in a moment).

The Bulls spent said #7 pick on Arizona big man Lauri Markkanen, who despite being an above average scorer, has plenty of defensive issues that could ultimately limit his upside. He at least seems to fit the offensive system that Fred Hoiberg ultimately wants to run, but is far from a slam dunk.

It was, to say the least, not the kind of transaction Bulls fans were expecting involving their two-way star guard. Without the benefit of hindsight, the Wolves appear to be a much better team after last night, and the Bulls...not so much.

To cap off the night, the Bulls made of the more infuriating moves of the draft, selling the #38 overall pick to the one team in the league that nobody wanted to see get any better - the Golden State Warriors.

Golden State (who previously didn't have a pick) made a splashy move by selecting Oregon big man Jordan Bell, a near perfect fit to play center in Steve Kerr's offense.

Sure, it cost Golden State $3.5 million, which could be a record cash price ever paid for a draft pick. But $3.5 million in sports terms in pennies. And the Bulls got nothing - nada - in return except the cash.

So the Bulls got a few nickels to toss in the coffers, the Warriors potentially found their next big man to play alongside Curry-Durant-Klay-Draymond, and the rest of the league is wondering why it happened. Knowing how Golden State operates, Bell will probably be an All-NBA guy in three years.

Not exactly a night to remember in the Windy City.

Speaking of those Minnesota Timberwolves, the team used the #16 overall pick they acquired from the Bulls to take Creighton big man Justin Patton.

Adjusting from the Greg McDermott style of coaching to Tom Thibodeau will be...well...an adjustment; but Patton will ultimately get exactly what he needs - time.

Minnesota has budding star Karl Anthony Towns holding down the post spot for the foreseeable future, and a few different guys they'll rotate through along side him. Patton should be afforded some time to refine his game and adjust to the NBA level.

As a bonus, Minnesota's D-League affiliate is located in Des Moines, where Patton could likely spend some time this upcoming season.

For a young kid from Omaha, starting his pro career bouncing between Minneapolis and Des Moines seems like a pretty good deal.

Plus, the Wolves are a team that REALLY seems to be headed the right way after last night. Adding Butler to the young duo of Andrew Wiggins and Towns will make them a formidable foe going forward.

Depending on how quickly Patton comes into his own, the athletic big man duo of him and Towns could be a tough combo for teams to handle.

There's certainly plenty of worse situations Patton could have found himself in.

Oh, and the slot value for the contract Patton will sign is a little north of $9 million, assuming the team exercises their options through the fourth year. So there's that, too.

So the New Hampshire Fisher Cats (whatever that is) will be wearing these "poutine themed" jerseys this weekend:

That should just about cover the themed jerseys for this year.

The Knicks are still a mess

While his team was busy drafting players, and Phil Jackson was talking about trading their one attractive piece to build around, Knicks owner James Dolan was doing this:

The lady shouting "WE LOVE YOU!" at the end is the best.

When the owner is too busy crooning to show up to the draft, the fans should be concerned.

One more from the draft

I'm far from a fashion expert, but this seems like kind of a miss to me:

Markelle Fultz wearing shoes tonight that are made out of basketballs. pic.twitter.com/jCjzommlvM

It's cool he likes basketball so much that he made shoes out of them, but to me they look like rental shoes he borrowed from a bowling alley.

I probably just don't get it.