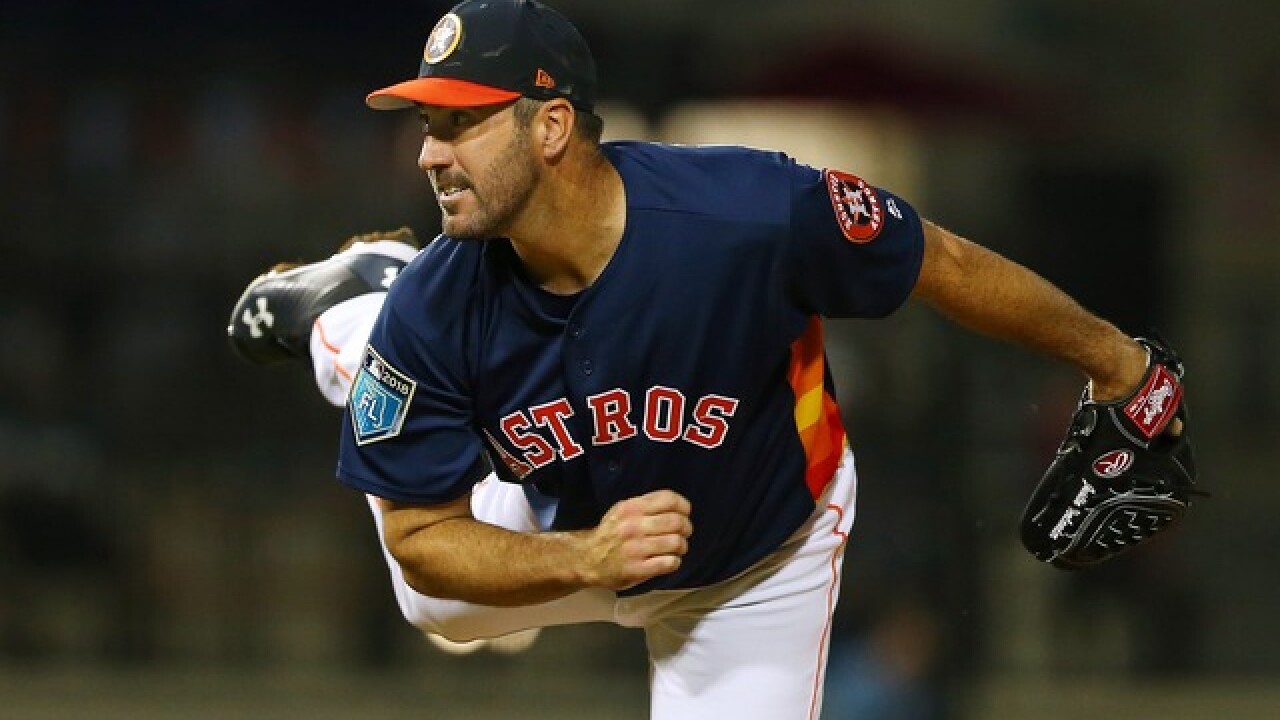 Image copyright 2018 Getty Images. All rights reserved. This material may not be published, broadcast, rewritten, or redistributed.
Rich Schultz
<p>WEST PALM BEACH, FL - MARCH 09: Justin Verlander #35 of the Houston Astros delivers a pitch during the third inning of a spring training game against the St. Louis Cardinals at FITTEAM Ball Park of the Palm Beaches on March 9, 2018 in West Palm Beach, Florida. (Photo by Rich Schultz/Getty Images)</p>

The reigning champs. The Bronx Bombers. The flame throwers.

There's the little doubt that the Yankees won the headline battle during the offseason with the acquisition of National League MVP Giancarlo Stanton, bolstering what was already a formidable lineup. While their moves weren't nearly as splashy, the Astros could also be better in 2018 thanks to a few savvy moves of their own. The Indians didn't make hardly any offseason changes - but why mess with what's working?

Of course, it's always foolish to count out the Red Sox, and the Angels made their own big time signing to try and dethrone the reigning World Series champs.

Division by division, here's a look at what to expect in the American League in 2018.

While the Blue Jays, Orioles, and even Rays have stuck their nose into the conversation in the AL East race at various times over the past decade, this year figures to come down to the two heavy hitters in the division: The Yankees and Red Sox.

The Yankees feature a better lineup (the Stanton-Aaron Judge-Gary Sanchez trio is about as good as you'll find, plus it doesn't stop there), but have some questions surrounding their pitching staff. New York attempted (and failed) to find another high-end arm during the offseason, instead settling on a one-year deal with CC Sabathia. They'll need Luis Severino to have another Cy Young caliber year, the a big season from Sonny Gray as well.

The Red Sox lineup is nothing to sneeze at either, but their advantage COULD be in their pitching staff, provided they're able to stay healthy in 2018. The 1-4 punch of Chris Sale, David Price, Rick Porcello, and Drew Pomeranz has a shot to be the best in the division, but Price is coming off an injury plagued 2017, and Pomeranz won't be ready for opening day. The addition of JD Martinez in the offseason gives the Sox some much needed power in the lineup.

The Blue Jays are a team to not sleep on - despite the departure of Jose Bautista (who still hasn't found a home), their lineup is salty with Josh Donaldson, Troy Tulowitzki, Russell Martin, and Justin Smoak anchoring the heart of the order. Their pitching staff is also good enough to keep them in most ballgames. Don't be surprised if the Jays contend for a wild card spot.

That's probably where the conversation ends - the biggest question surrounding the Orioles in 2018 will likely be whether they decide to trade Manny Machado and/or Adam Jones during the year, or watch them potentially walk away as free agents next winter. Closer Zach Britton could also draw interest from teams this summer.

As for the Rays? Somehow, advanced metrics site FanGraphs sees them winning 78 games. In this division, I don't see it.

You'll be hard pressed to find many people NOT picking the Cleveland Indians to repeat as AL Central champs in 2018. They possess one of, if not the best, pitching staffs in all of baseball - headlined by reigning AL Cy Young winner Corey Kluber. When you can follow that up with Carlos Carrasco, Trevor Bauer, Danny Salazar, and Josh Tomlin...that's pretty hard to beat. Plus, the bullpen tandem of Cody Allen and Andrew Miller is as good as they come in the 8th and 9th innings.

The Twins feel like a safe(ish) pick to finish second this year, after going from 100+ losses in 2016 to a wild card team a year ago. Joe Mauer is still hanging around, and will anchor a lineup that added Logan Morrison on a one-year deal in the offseason. Ultimately, the Twins need once heralded prospects Byron Buxton and Miguel Sano (who had plenty of negative off-field headlines this offseason) to live up to their potential. The rotation looks sketchy at best, and figures to have about eight guys contend for five spots.

The rest of the division is about as wide open as they come, with the Royals, Tigers, and White Sox all in varying stages of rebuilds. Kansas City should try (and will likely fail) to find takers for Alex Gordon and Ian Kennedy and their massive contracts at some point this season, in an effort to rebuild a farm system that is generally regarded as one of the two or three weakest in the majors. The White Sox will start to reap the rewards of the Chris Sale, Jose Quintana, David Robertson, and on and on trades, but will still be young this year.

The Tigers are old. And slow. And still a few years away.

I'll give the slight edge to the AL East as the best division in the league, but the case could just as easily be made for the AL West. The Astros are the best team in baseball, the Angels made some aggressive moves in the offseason, the Mariners are coming to the end of their window to break a long playoff drought, and the A's are on the cusp of being contenders as well.

The Astros won the whole darn thing in 2017, and the club looks even better (at least on paper) in 2018. They'll have a full season of Justin Verlander on the hill, and also traded for Gerrit Cole (who has top of the rotation potential) in the offseason. Mix him in with Dallas Keuchel, Charlie Morton, and Lance McCullers, and the Astros could have the best rotation in the league. The lineup is also ridiculous, with 2018 MVP candidate Carlos Correa and Alex Bregman still in their early 20's. That Jose Altuve guy is pretty good as well.

Not to be outdone, the Angels made one of the biggest splashes of the offseason with the signing of two-way Japanese star Shohei Ohtani. In fairness, Ohtani has had a really rough spring, but he's still considered one of the front runners to win AL Rookie of the Year. The Halos also signed Justin Upton to an extension, and still have the best player in the game in Mike Trout. Realistically, the Angels will probably go as far as their rotation will take them. Garrett Richards is a legit #1, but there's a high potential for volatility after that - especially if LA leans on Ohtani to be their #2.

The A's are a team full of guys most people probably haven't heard of - at least not yet. Former CWS standout A.J. Puk (Florida) is primed to join the rotation as some point this year, a group currently headlined by Sean Manaea and Kendall Graveman. Vets Matt Joyce, Khris Davis, and Jed Lowrie will form the heart of the lineup that will be joined by plenty of new faces.

The Mariners are another interesting group - and much of their success will depend on how much Felix Hernandez has left in the tank. He's not the oldest guy out there, but has a ton of mileage on his arm. The same could be said for Robinson Cano, still a stud, but a player who is much closer to the end than the beginning.

As for the Rangers - they're probably looking at a rough season. Cole Hamels falls into the same category as Hernandez - a guy that's closer to the end than the beginning - and Rangers fans are hoping for one more solid season out of Adrian Beltre. Texas feels like a club that could play heavy into the summer trade market as the deadline approaches.