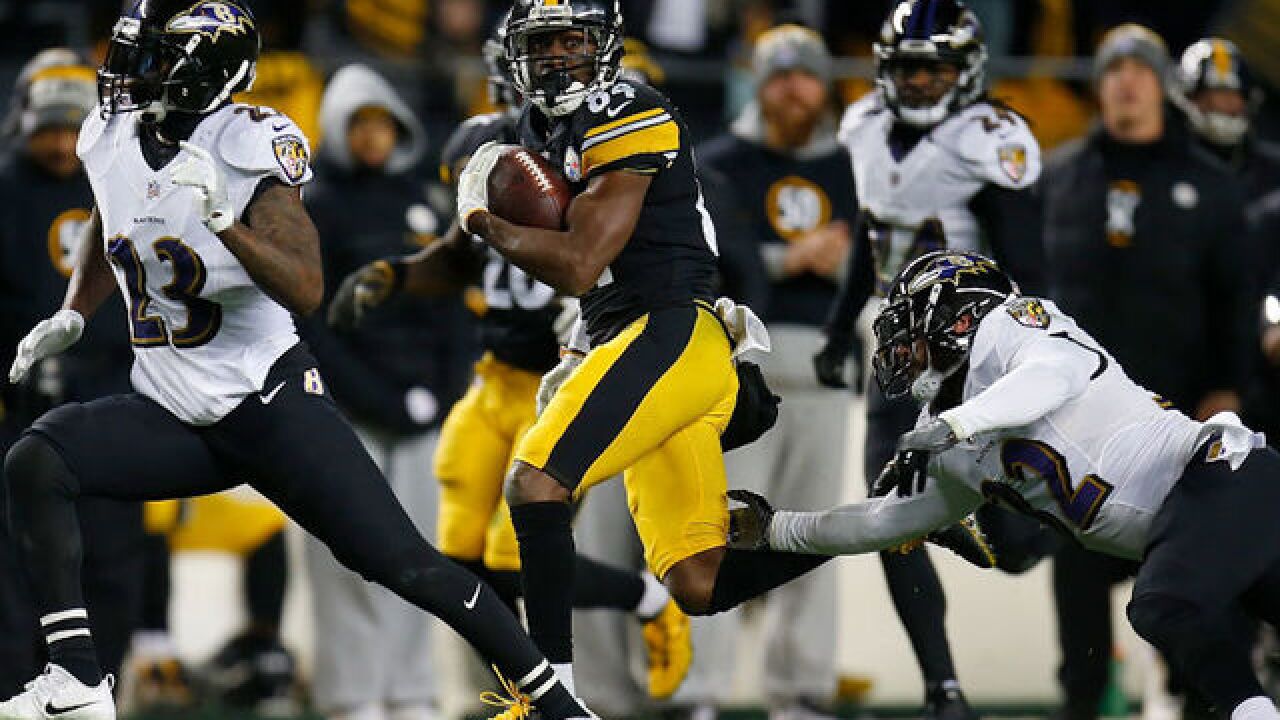 Copyright Getty Images
Justin K. Aller
<p>Antonio Brown #84 of the Pittsburgh Steelers runs up field after a catch in the second half during the game against the Baltimore Ravens at Heinz Field on December 10, 2017 in Pittsburgh, Pennsylvania. (Photo by Justin K. Aller/Getty Images)</p>

The NFL's premiere game of the week took a big hit in TV ratings on Sunday night, despite it being a close game.

NBC's "Sunday Night Football" match up between the Baltimore Ravens and the Pittsburgh Steelers brought in 17.2 million viewers on Sunday night. That number was down 35 percent from last year's Dallas Cowboys and New York Giants game, which was the most-watched prime time regular season since Thanksgiving 2015.

The drop for the NBC broadcast is troubling for a league that has been plagued by down ratings nearly all season. It's even more surprising since the Ravens and the Steelers are bitter rivals and the game ended with the Steelers beating the Ravens 39 to 38.

NBC wasn't the only one to see its NFL ratings take a dip. CBS' slate of games over the weekend were down 27 percent from last year, while ESPN was down 9 percent. Fox was the only network to see its ratings go up from last year with its numbers up 6 percent.

Overall, the ratings for the NFL's season are down 9 percent from last year.

For most of the season, the league's critics, including President Trump, have pointed to the declines as a sign that players kneeling during the national anthem in protest are hurting the league's popularity. The reason why the league's viewership has taken a tumble may be harder to pinpoint, but one pain point is that many of the league's star players have been injured and out of games.

Richard Sherman, Deshaun Watson, J.J. Watt, Odell Beckham, Andrew Luck, Carson Wentz and Aaron Rodgers have all been injured at some point throughout this season. The suspension of Cowboys running back Ezekiel Elliott may have also had an impact since the Cowboys, one of league's most popular and watched teams, have been lackluster in his absence.

The shortage of stars may mean that casual fans are less likely to tune into big games of the week like "Sunday Night Football."

Yet, the numbers are still down across the board for the NFL and it now looks the end of the season and the playoffs to help turn around the ratings slide.