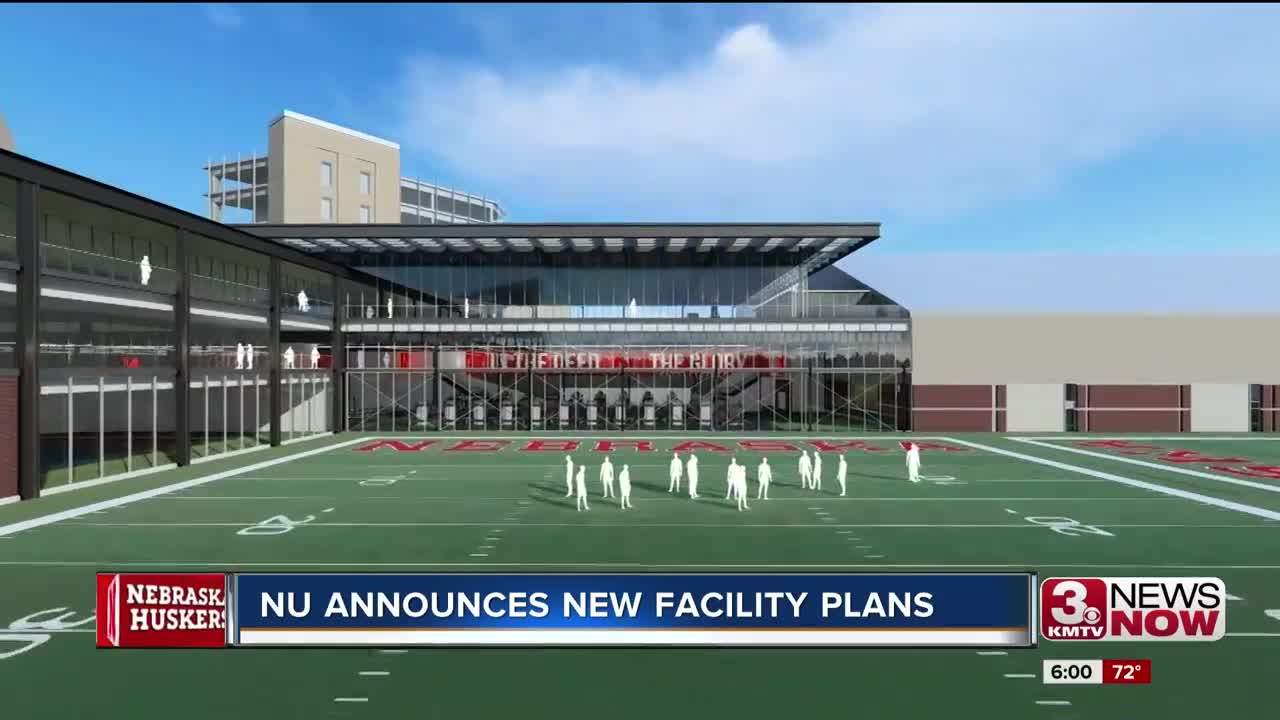 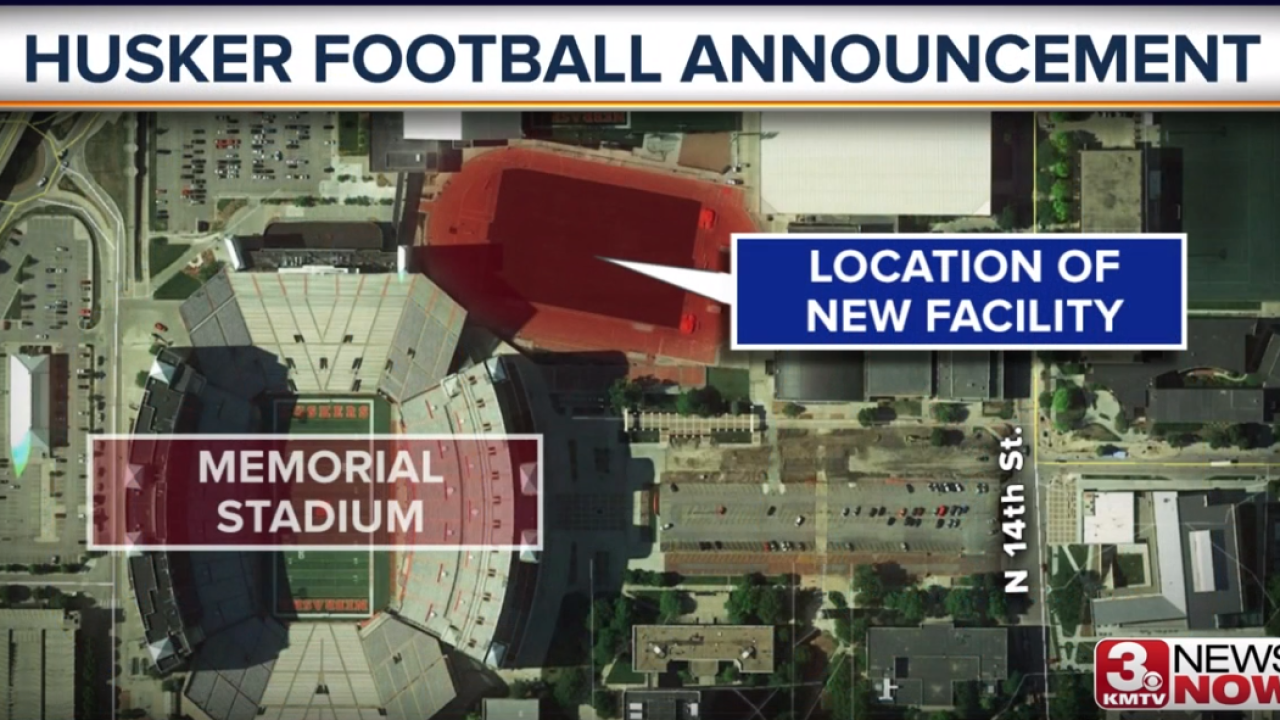 LINCOLN, Neb. (KMTV) — The Nebraska football team is preparing for their biggest home game in years this weekend. However, an announcement on Friday is drawing attention to another aspect of the football program.

The university provided the following release about the facility which is expected to be completed in the summer of 2022:

University of Nebraska Chancellor Ronnie Green and Athletic Director Bill Moos announced Friday plans to embark on construction of a new athletic facility housing the Nebraska football program. The ‘Go Big’ project will provide Nebraska Athletics with a facility that will be the largest of its kind in the country.

The new athletic complex will be approximately 350,000 square feet and will be constructed east and north of Memorial Stadium and will blend naturally into the University of Nebraska’s flagship campus. The facility will be convenient and beneficial for all 600-plus Husker student-athletes, and help Nebraska provide the most comprehensive student-athlete experience in the country.

Groundbreaking is expected to occur next summer with completion of the new complex scheduled for the summer of 2022. The $155 million project will link the new facility with Memorial Stadium and will also improve the fan experience at Memorial Stadium. Construction will include new vertical transportation for fans entering and exiting the North Stadium.

“Nebraska has been an innovator in college athletics going back to Coach Devaney and Coach Osborne,” Moos said. “We are making the investment to once again be a national leader in facilities, and continue our mission of competing at the highest level and building for championships.”

The facility will provide the Nebraska football program with a new locker room, strength and conditioning center, athletic medicine facility, equipment room, meeting rooms, coaches’ offices and an additional outdoor practice facility. Plans for the building also include the training table and academic support facilities for student-athletes across all 24 Nebraska sports.

The last major facility construction for the Nebraska football program was completed in 2006 with the opening of the Tom and Nancy Osborne Athletic Complex. Since that time, every Big Ten school has opened new football facilities or is in the planning stages of constructing a new facility.

The current football facilities were built to accommodate a roster of approximately 125 players. Head Coach Scott Frost has placed a renewed emphasis on the importance and mission of the storied Nebraska walk-on program. Nebraska’s 2019 roster has more than 150 student-athletes creating a need for an expanded locker room, weight room, athletic medicine and meeting spaces.

Nebraska owns the largest roster in the Power Five ranks this season and trails only the service academies among FBS schools.

“This new complex will give our football program everything we need to operate efficiently on a daily basis,” Frost said. “This building will showcase Nebraska and be a difference-maker as we sell our program to recruits from all parts of the country. It was also important that we design a building that benefits all of our student-athletes and helps position all of our teams to compete at the highest level.”

The addition of a new athletic complex continues a building boom on the University of Nebraska campus. When including projects that are newly completed, under construction or committed, UNL is investing more than $350 million in new or renovated facilities. Recently completed or upcoming projects include the College of Engineering, the Johnny Carson Center for Emerging Media Arts, Mabel Lee Hall and more than $50 million of facility investments on East Campus.

“We are investing more than $500 million to lead on a national stage—both in athletics and academics,” said Ronnie Green, Chancellor, University of Nebraska-Lincoln. “And we appreciate all of the incredible public and private support we have for these efforts. This new facility is an exciting opportunity to ‘Go Big’ for Husker Football and all of our student-athletes.”

The footprint of the new athletic facility will sit on part of the current location of Ed Weir Track, the outdoor home of the Nebraska track and field program. As part of the facilities plan, Nebraska will construct a new outdoor track stadium north of the Bob Devaney Sports Center on Innovation Campus. The new outdoor track will be closer to Nebraska’s indoor track facility and coaches’ offices, which are housed at the Devaney Center.

The facility upgrades for the football and track program continue Nebraska Athletics’ commitment to championship facilities. Nebraska has partnered with the city of Lincoln to have the Husker basketball programs compete in Pinnacle Bank Arena, one of the nation’s top arenas. The renovated and modernized Bob Devaney Sports Center provides Nebraska with the nation’s top volleyball venue. The Husker soccer and tennis programs have opened new facilities in the past five years, and the men’s and women’s gymnastics programs will soon move into a new training facility.

"This facilities upgrade is another example of the commitment the Nebraska Athletic Department shows to dreaming big," Nebraska Volleyball Head Coach John Cook said. "When we renovated the Devaney Center in 2013, it changed the landscape of college volleyball with our record attendance numbers, and it certainly helped in attracting recruits who have helped us win two national championships and compete in four straight Final Fours. This new facilities project is another huge step forward for our athletic department.”

The Nebraska Athletic Department has a goal of raising approximately $100 million to fund the ‘Go Big’ project. Nebraska Athletics is one of only a handful of athletic departments in the nation who receive no state dollars or student fees and give funds back to the university. The Athletic Department annually provides more than $10 million to the general University fund, including $5 million to provide scholarships for non student-athletes.