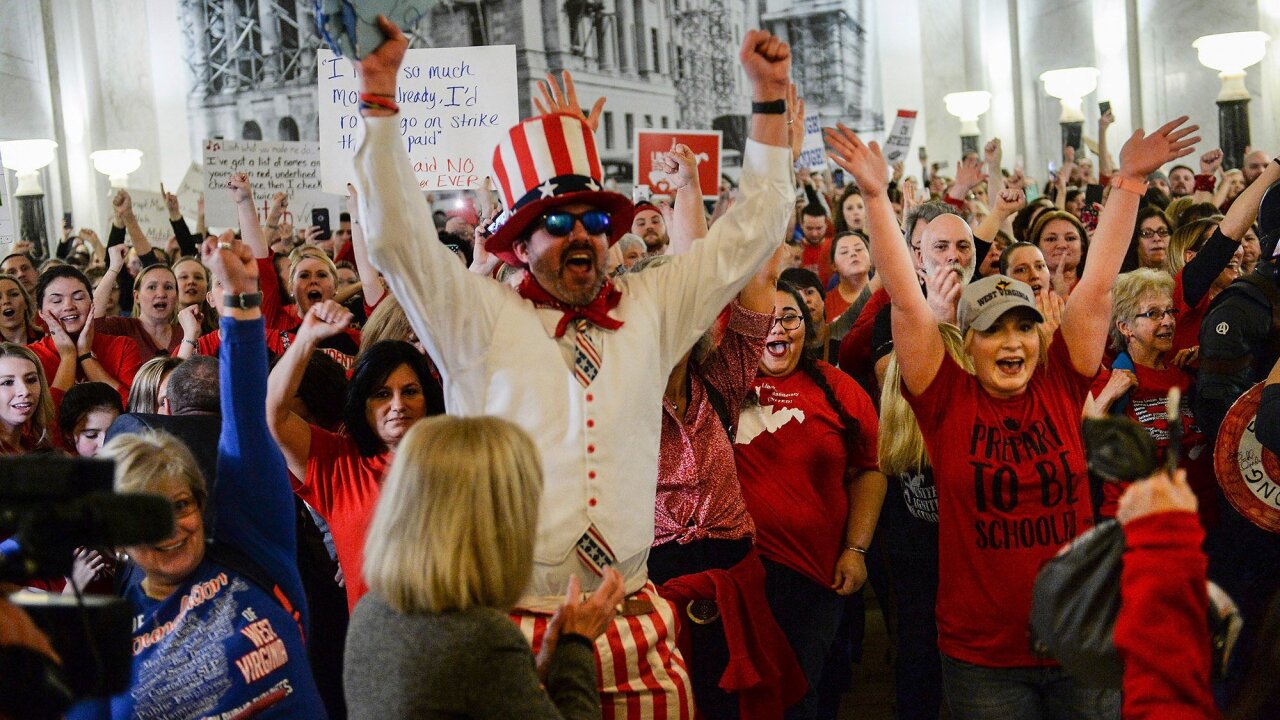 The announcement comes after the state House chose not to bring up controversial bill SB 451 on Wednesday night, ensuring the legislation is dead.

The House voted to take up HB 2730, the bill from Gov. Jim Justice that addresses compensation of state police and salaries for public school teachers and personnel. It's unclear when the House will further discuss or vote on that bill.

The strike was the second time in 11 months that West Virginia teachers have walked out. But this time, they weren't fighting for more raises. They wanted a quick death to SB 451, which would use public dollars to help fund new charter schools and private school tuition.

That's a slap in the face for public schools, which desperately need more funding, teachers say.

"I think the most important thing is (charter schools) takes funding away, and kids away, from those public schools that need it," said elementary school teacher Christina Rollins.

The latest strike was part of a fresh wave of teachers' protests that started last year in West Virginia, spread across the country, and came back full circle.

On the opposite coast, Los Angeles teachers -- who recently scored victories with their strike this year -- threw their support this week behind West Virginia teachers.

"Solidarity with our West Virginia sisters and brothers!" tweeted United Teachers Los Angeles, the local union. "They are staying out on strike on Wednesday 02/20 to ensure that Republicans do not attempt to revive the pro-privatization bill."

The controversial bill dealt with an issue many states are grappling with -- whether to put more public dollars toward privatized education.

Specifically, SB 451 would have:

-- Introduced charter schools for the first time in West Virginia;

-- Started an education savings account program, which would have allowed households earning less than $150,000 a year to apply for public funds to help pay for private school tuition, tutoring, online learning programs or other educational costs.

The bill bounced back and forth this week between the state Senate and House of Delegates, with each side making changes. But after teachers went on strike Tuesday, the House postponed a vote on the bill indefinitely.

"For all intents and purposes, this particular bill ... is considered dead, except for one exception," said Lee. "There's one scenario in which it can resurface, and that is the 24-hour window in which the motion to be reconsidered."

And that's why teachers refused to return to school.

"We are staying out one more day to make sure that this is a dead bill," said Fred Albert, president of the American Federation of Teachers' West Virginia chapter.

What's the motive behind this bill?

Union leaders said they believe this bill -- just like new bills in Oklahoma and Arizona -- are aimed at retaliating against teachers who scored victories with their 2018 protests.

Teachers in West Virginia say none of the lawmakers in favor of the bill consulted with educators before drafting SB 451, dubbed the "omnibus education bill."

Albert praised House lawmakers for listening to teachers this week but complained that they were only given about a minute each to address their concerns.

By contrast, the union leader said, "They let the outsiders from the (educational savings accounts) and the charter schools speak unlimited hours before the committee."

"To say that simply wanting more options for children throughout the state of West Virginia is retaliatory is misinformed, at best," said GOP state Sen. Patricia Rucker, one of the bill's sponsors. "There is no retaliation involved in wanting every student in West Virginia to have the best possible chance to succeed based on his or her own needs."

Senate President Mitch Carmichael, also a Republican, stressed that the House's decision to postpone a vote indefinitely was "a delay, not a defeat."

"There is a vital need to reform West Virginia's education system, and I do not believe that any true transformation comes through a pay raise alone," he said. "Our families deserve competition, choice and flexibility."