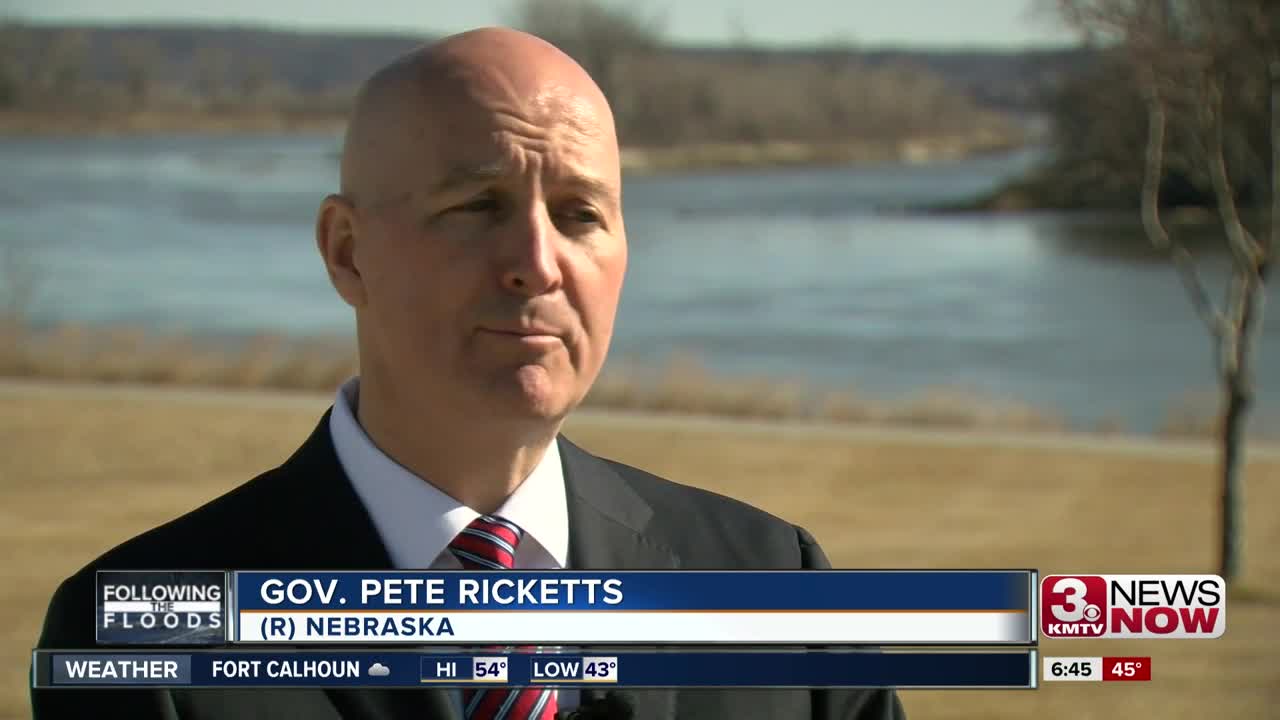 OMAHA, Neb. (KMTV) — Near the Missouri River, which flooded one year ago, Gov. Pete Ricketts reflects on where the state of Nebraska was when the snow started to melt and the rain began to fall.

It was flooding that devastated many areas, stemming from huge ice blocks.

"It's just something I never thought I would see in Nebraska, is these huge blocks of ice, covering the landscape," said Ricketts. "It really was stunning, and of course, most of these were the size of buildings and wiped buildings out completely; it was really just a stunning demonstration of mother nature's power."

"The National Guard - our helicopter pilots said that the missions they flew during that weather was more challenging than the combat missions they had flown," Ricketts said. "We had our state patrol that was out there, working to rescue people; our department of transportation worked long ours to make sure they kept people away from dangerous roads."

The governor remembers the floods costing the state hundreds of millions of dollars, between lost livestock, damaged roads and home damages.

"So if you start adding all of those up together, the total bill, not counting Offut which is another million dollars more on top of it, is about a million dollars."

Along with all the challenges the state faced, Ricketts remembers the helpers.

"We had individual people from as far as North Carolina deliver hay and supplies or FAA students from Iowa," Ricketts said. "I mean the outpouring support from the country, it was just humbling."

Many parts have been able to rebuild in the last year.

"At one point we had about a third of our 10,000 miles of state highways were closed during that storm, 3,300 miles," Ricketts said. "All those are back open again; we had a couple hundred miles that were damaged that had to be fixed - those are all open again. We had 27 bridges that were closed, all those are open."

Some, however, still haven't been able to rebuild, and counties are still waiting for money to help alleviate major costs, but Ricketts remains hopeful.

"There's a great spirit here in Nebraska, and we saw that here last year," Ricketts said. "I truly believe that this will go down in history as our finest hour, the way Nebraska stepped up. We still have more work to do; we still have people that need help. We still Nebraskans to stay engaged, and look for ways to help their neighbors who have been able to help their neighbors who have been impacted by the flooding. There is some recovery ahead, and I'm confident working together, Nebraskans will build bigger and better than ever before."