5 takeaways from the 2020 vice presidential debate 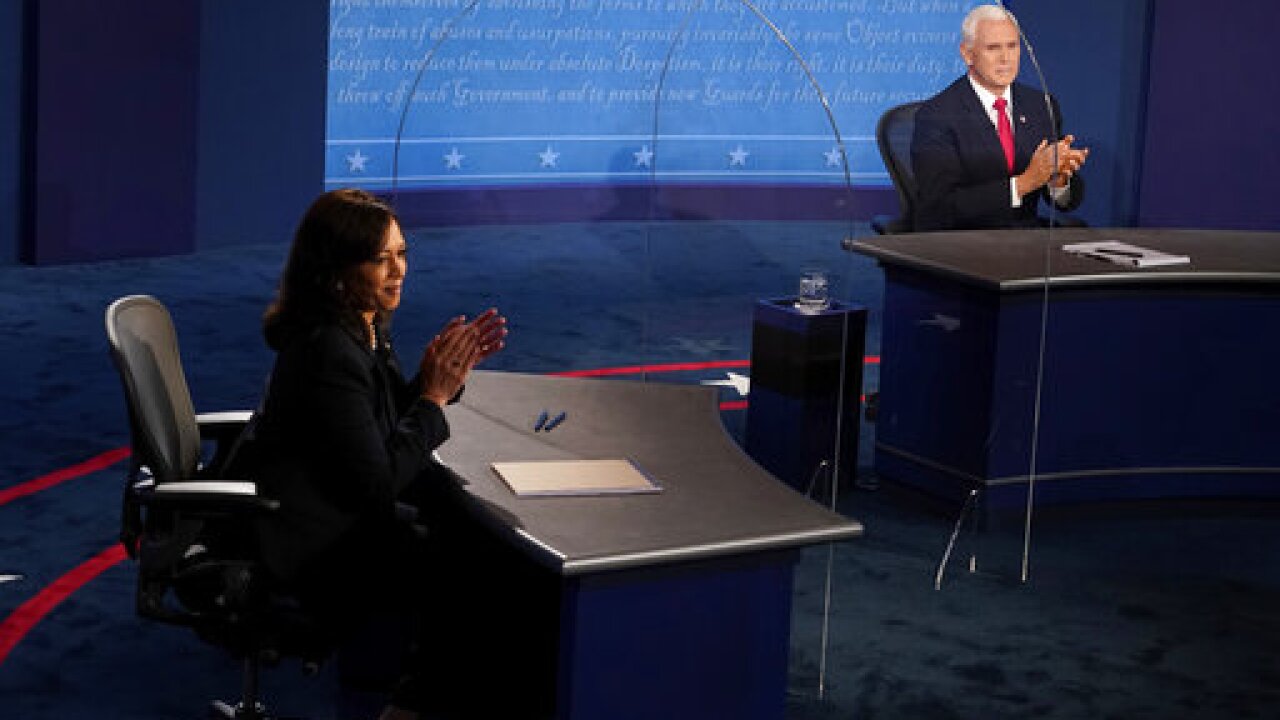 Wednesday marked the first and only debate between vice presidential candidates Mike Pence and Kamala Harris.

A number of questions were avoided by the candidates from moderator Susan Page. But the debate had a different tone and tenor than last week’s debate between Donald Trump and Joe Biden.

While Page reminded the candidates of the rules during the middle of the debate, much like Wallace last week, the debate largely remained civil. Were there still interruptions? Yes.

At several points, Harris responded to a few interruptions of Pence by quipping “I’m speaking.” Pence at times accused Harris of not telling the truth by saying she can speak her opinion but not her own facts.

2) Coronavirus
It came as no surprise that the most combative topic of the debate was on the coronavirus. And as part of the visuals of Wednesday’s debate, two Plexiglas shields stood between Harris and Pence, a reminder of the number of coronavirus cases spreading through White House staff.

Harris took an early jab on Trump and Pence on their handling of the coronavirus. Pence headed the White House’s coronavirus task force.

"Well, the American people have witnessed what is the greatest failure of any presidential administration in the history of our country,” Harris said. Pence fired back, claiming that Harris was sowing doubt on the efficacy a potential coronavirus vaccine. Harris said she’d take a coronavirus vaccine if recommend by health officials, but not if it is recommend by Trump.

“The fact that you continue to undermine public confidence in a vaccine, if the vaccine emerges during the Trump administration, I think is unconscionable,” Pence said. “And senator, I just ask you, stop playing politics with people's lives."

Trump has suggested he would intervene on FDA guidelines on issuing an emergency use authorization on a coronavirus vaccine, but on Tuesday, the FDA moved forward with its vaccine guidelines, which will likely push a vaccine approval until after the election

Wednesday’s debate was notable as Harris became the first minority candidate to participate in a vice presidential debate. During the debate, the topic of race came up.

Pence and Harris were asked to address whether justice was served in the Breonna Taylor case. Taylor was a 26-year-old Black woman who was killed in March by officer gun fire. Officers were executing a warrant when Taylor’s boyfriend fired at officers, prompting officers to return fire. There are questions on whether officers announced themselves before entering the apartment. A Kentucky grand jury declined to press charges on officers for firing at Taylor. One of the officers involved is facing criminal charges for wanton endangerment.

Harris said that she believed justice was not served in the Taylor case.

Pence offered his condolences to Taylor’s family, but disagreed with Harris.

“Well, our heart breaks for the loss of any innocent American life and the family of Breonna Taylor has our sympathies, but I trust our justice system, a grand jury that reviews the evidence,” Pence said. “It really is remarkable that as a former prosecutor, you would assume an impaneled grand jury looking at all of the evidence got it wrong.”

Pence then pivoted to decrying “rioting and looting” that took place in response to incidents of Black Americans being killed during interactions with police.

“This presumption that you hear consistently from Joe Biden and Kamala Harris that America is systematically racist and that Biden says that law enforcement has an implicit minorities is a great insult to the men and women who serve in law enforcement,” Pence said.

Harris, like Biden last week, opted to avoid answering whether a Biden administration would add members to the Supreme Court. Some Senate Democrats have suggested adding members to the high court if Democrats win both the Senate and White House in November.

“This is a classic case of if you can’t play by the rules, you’re going to change the rules,” Pence said.

Meanwhile, Pence was asked whether he would be supportive of a full restriction of abortion in his home state of Indiana. He avoided that question.

There is renewed hope among conservatives that a sixth Republican-appointed justice would overturn Roe vs. Wade, allowing states to implement laws to significantly curtail legal abortions.

While Harris did not answer the question on expanding the size of the Supreme Court, she did hit back on any unraveling of Roe vs. Wade.

"We have the issue of choice, I will always fight for a woman's right to make decisions about her own body, it should be her decision, and not that of President Trump's or Vice President Mike Pence,” Harris said.

With Trump at the White House recovering from the coronavirus, it is questionable on whether next week’s debate will move forward. And if it does move forward, what changes might be made.

Following last week’s debate, the Commission on Presidential Debates said it was considering changes given the frequent interruptions between candidates.

Just about 48 hours after last week’s debate ended, Trump announced he tested positive for the coronavirus. With two weeks separating Trump announcing his diagnosis and next Thursday’s debate, Trump will have cleared the CDC’s recommended isolation period of 10 days. Trump has also said he is looking forward to next week’s debate.

The next presidential debate is scheduled for October 15 at 9 p.m. ET.