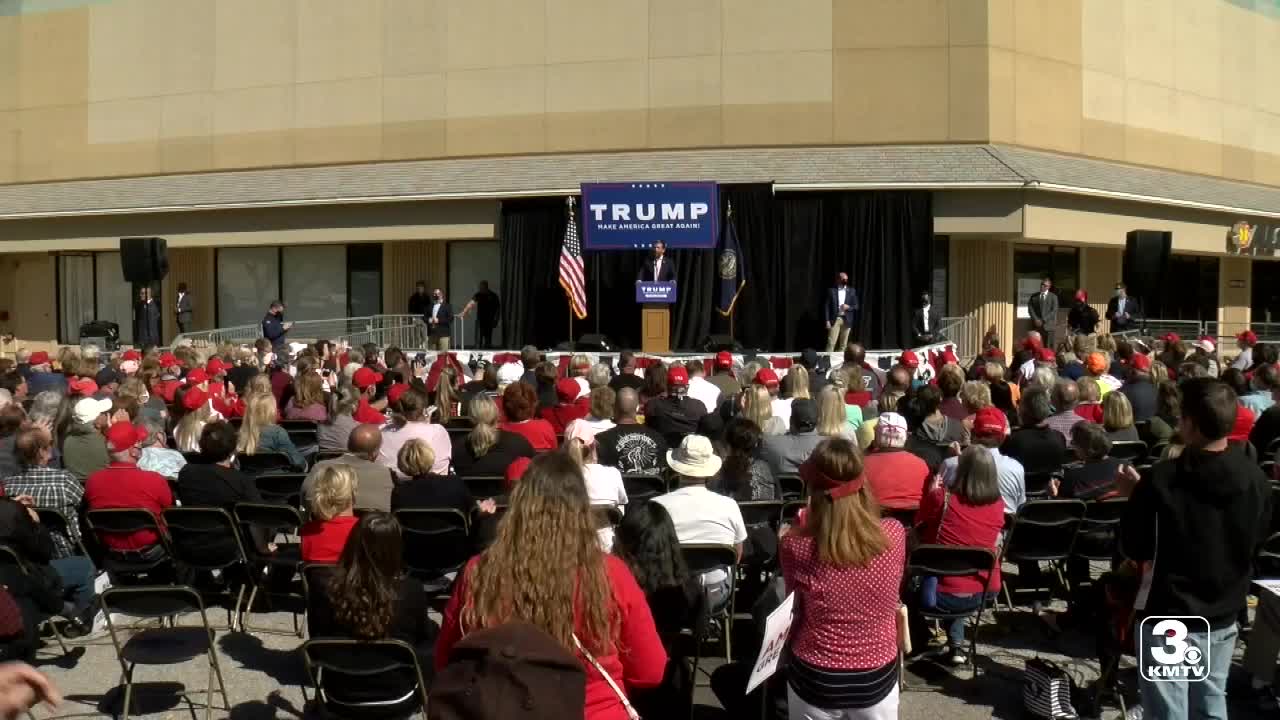 It was a speech that was almost 100 percent negative. Negative towards Democrats and presidential nominee Joe Biden.

OMAHA, Neb. (KMTV) — It was a speech that was almost 100 percent negative. Negative towards Democrats and presidential nominee Joe Biden.

“We want to give the nuclear football to a guy that needs a teleprompter to remember what his platform is,” says Donald Trump Jr.

Donald Trump Jr. made his third Omaha stop in less than a month, going to the GOP campaign offices in west-central Omaha. He hit Biden, Nancy Pelosi and even Biden's son Hunter Biden.

Trump Jr. also told the hundreds in attendance that it’s not your grandparents' Democratic party, anymore.

“They’re trying to milk a long history of being for blue-collar workers. I get that, when you’re in the rust belt and you’re in parts where you have blue-dog Democrats. This party doesn’t represent that anymore,” says Trump.

Trump Jr. wasn’t on the stage alone. Congressman Don Bacon and Governor Pete Ricketts got up to stump for the president.

Ricketts told the crowd that it’s not only important they vote, but they need to recruit friends as well.

“Everybody here, go out and vote 10 times. Not that way...ten times. I need all of you here today to make the commitment, to get yourselves to the ballot box, and get nine other people,” says Ricketts.

“You can be responsible in a pandemic without destroying livelihoods and businesses. The Democrats and Joe Biden, they seem to understand that, ‘let’s just shut down the whole country, maybe for 15-20 years,” says Trump.

A few hours later, a small event was held in Benson for Joe Biden, with the message focused on social security.

“It’s an earned benefit, you worked hard for that,” says retiree Cheryl Weston.

President Trump has talked of getting rid of the payroll tax that funds social security, which could lead to the program running out of money.

The group ‘Boomers for Biden’ says their nominee will ensure that doesn’t happen.

“Joe Biden will save our social security by preserving and strengthening the program that served us so well for generations and Trump will destroy social security,” says Jim Cavanaugh, Douglas County Commissioner and Chair for Boomers for Biden.

See also: Biden supporters also held a rally to talk about the future of social security.