Race for the Legislature: La Grone, Day squaring off in District 49 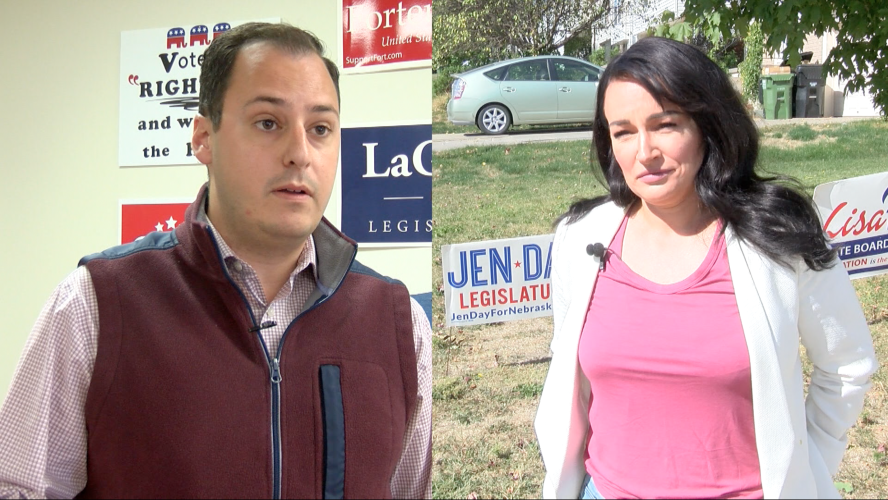 SARPY COUNTY, Neb. (KMTV) — In District 49, Republicans outnumber Democrats almost two to one. But in May, Democrat Jen Day surprised in the primary, beating incumbent Andrew La Grone, giving her momentum for a re-match in the general.

“The primary came an entire year-plus after we started putting in the groundwork to get my name out there and to get people more engaged in the process, so I think that's definitely part of the huge win in the primary,” says Day.

La Grone says he’s been out campaigning all summer and that he’s putting his support of law enforcement front and center in the campaign.

Day’s biggest focus is education, and making sure it’s well funded. She says she would vote against bills that lower property taxes, while at the same time re-doing the way Nebraska schools are funded.

“That’s why a lot of people moved here, is for the public schools for their kids. So I want to make sure that we’re protecting that funding and we’re improving on that funding,” says Day.

La Grone was a major supporter of a bill that brought some amount of property tax relief last session.

He says they can properly fund schools, and give out tax relief.

“We still have to make sure that we have the structural changes necessary to provide even more tax relief. While at the same time, providing the best schools that this state can provide,” says La Grone.

La Grone also has introduced a bill that requires Nebraskans to show an ID in order to vote. The bill failed, but during the hearing, Secretary of State Bob Evnen said it would stop a future problem from occurring in our elections.

“This is a voter confidence issue that we hear about today. The fact that voters say they think it's common sense, that would give them more confidence in our election system, I think it’s something we need to look at and implement,” says La Grone.

“We should be focusing on the problems that do exist instead of start imagining other problems that could come up in the future. We have a lot of problems that are active that we need to be solving right now,” says Day.

The La Grone campaign had a bit of a mishap when they sent out a flier, with a picture of a woman that looks like his opponent, but it turned out not to be Day.

“Just a lazy mistake, and I think it just reflects how unseriously he’s taken this race and this job,” says Day.

La Grone didn’t tell 3 News Now much on what exactly happened, but said it was a mistake.

“Obviously it was inadvertent and addressed it moving forward," he said.

“When people in the district had concerns, they emailed him dozens of times with no reply,” says Day.

La Grone said he’s proud of how he helps constituents, especially during the pandemic.

“When the pandemic hit, we’re able to help over a hundred individuals navigate the process to get the assistance they need to make it through these tough times,” says La Grone.