La Vista father and son identified as I-80 fatal crash victims; arrest made

LINCOLN, Neb. (KMTV) — On Saturday morning, an eight-vehicle crash on Interstate 80 (I-80) left two people dead and five others hospitalized. On Sunday, the Nebraska State Patrol (NSP) identified the two people who died as Mark Kaipust, 41, and Taylor Kaipust, 7, of La Vista.

Mark Kaipust was an occupational therapist, coach and professor. Many are sharing messages in tribute to him and his son:

Creighton University said, "The Creighton community is devastated by the news of this terrible accident, and the loss of Mark and his son. Our thoughts and prayers are of course with their family, friends, and with Mark’s colleagues at Creighton and in the health community."

As my prayers and thoughts extend to Mark’s family and friends, too they reach to his colleagues in OT, all of SPAHP, and the members of our campus community.

It is with great sadness to share the tragic news that Mark Kaipust ‘98 and his son Taylor died in a car accident. Mark spent countless hours coaching for the Gross Catholic basketball program for the past 20 years. He will be greatly missed, and our prayers are with his family.

Junior Cougars Basketball, a nonprofit founded by Kaipust shared the following heart-wrenching post in honor of Mark and his son:

Gross Catholic Basketball shared this photo of the Kaipust family: 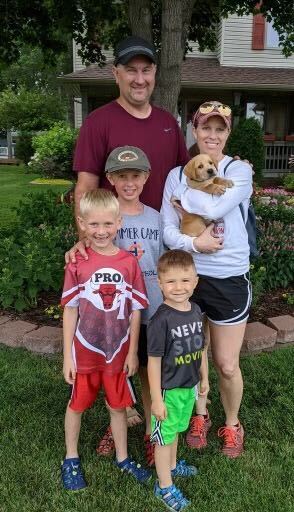 A statement was issued on behalf of the Kaipust family.

"Our families are heartbroken over the loss of two people we love and will miss dearly – Mark and Taylor. We appreciate the outpouring of support and ask for prayers and privacy as we navigate this difficult time."

A gofundme has been to help the Kaipust family cover costs related to their loss.

The NSP said, “After preliminary investigation, investigators believe a semi, driven by Yorkwind Crawford, 50, of North Miami Beach, Florida, rear-ended another vehicle east of the 27th Street interchange. The semi then continued driving westbound for more than a mile and struck several other passenger vehicles west of the 27th Street interchange.”

Investigators believe speed and inattention were the primary causes of the crash.

Crawford was arrested and charged with two counts of motor vehicle homicide and was held in the Lancaster County Jail.

The crash, which occurred at approximately 9:25 a.m., is still under investigation.

Yorkwind Crawford, the driver of the semi who allegedly caused the wreck, will appear in court next on Oct. 21 at 10:00 a.m. in Lancaster County.