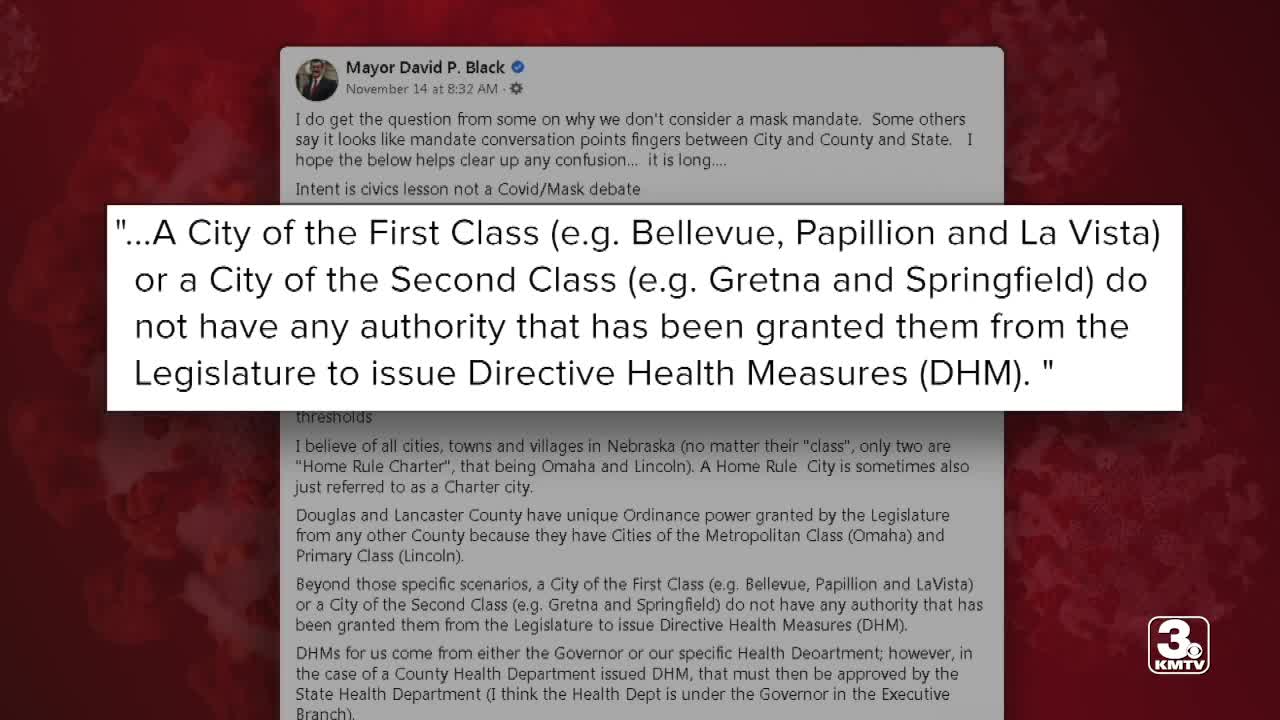 After Sen. Wayne gave legal reasoning for a mask mandate, the city of Ralston is now investigating to see if they can implement one. The City of Papillion is also re-evaluating their ability to issue a mandate.

On Tuesday, the city of Beatrice's board of health passed a mask mandate. Bellevue mayor, Rusty Hike did not respond to several calls, but on Monday Mayor Hike wrote in a blog post on the city website what most city officials believed for months.

"I as Mayor of the City of Bellevue do not have the authority to issue or ask the Police Department to enforce a Mask Ordinance for our community," wrote Hike.

Sen. Justin Wayne, who represents parts of North Omaha, changed the dynamic Monday when he said state statute gives cities like Bellevue the ability to "make regulations to prevent the introduction and spread of contagious, infectious, or malignant diseases into the city."

“It’s clear to me as an attorney but also as a chair of urban affairs, that the statutes gives clear authority to the cities to regulate the prevention of diseases such as cover-19,” said Wayne.

In Papillion, Mayor David Black wrote a long Facebook post last week saying a city of their class doesn’t have the authority to issue a mask mandate. A belief seconded by Gov. Pete Ricketts. Black's post has since been deleted and communications director for the city, Trent Albers tells 3 News Now they’re re-evaluating the information and the city does not have a position on mandates.

City officials in Ralston originally agreed with those in Bellevue and Papillon, that they could not do a mask mandate, but after Sen. Justin Wayne came out with his legal reasoning they’re now re-evaluating to see if they can implement one city-wide.

“We’re now investigating what Senator Wayne is pointing towards. We still see it as kind of a gray area and we’re trying to pick our way through the legal arguments here,” said Rick Hoppe, Ralston city administrator.

Hoppe says they also need to figure out what the process would look like to implement a mandate and that they’ll likely know by next week.

“I think as the case count has grown and peoples' concerns on whether they’re vulnerable to COVID start to rise, they’ve expressed more concern. They’re looking for us to show more concern on the issue,” said Hoppe.

Multiple business owners tell 3 News Now that they want to see a mandate. The entrance to ‘Quick Bites’ Soul Food in Bellevue says masks are recommended, but owner Justin Epting really wants his customers to wear one. The disabled veteran has kidney issues and is on dialysis daily.

“It’s dangerous for me to even be out here working. But the fact of it is, I go down, get sick, something happens to me. Eight families are affected,” says Epting.

He thinks a mask mandate would ensure that those looking for shrimp and grits have a mask on when they pick up their food.

When asked about cities like Beatrice passing a mandate, Governor Ricketts said Tuesday that he stands firm in his opposition and urges cities to check with their legal counsel before they implement one.