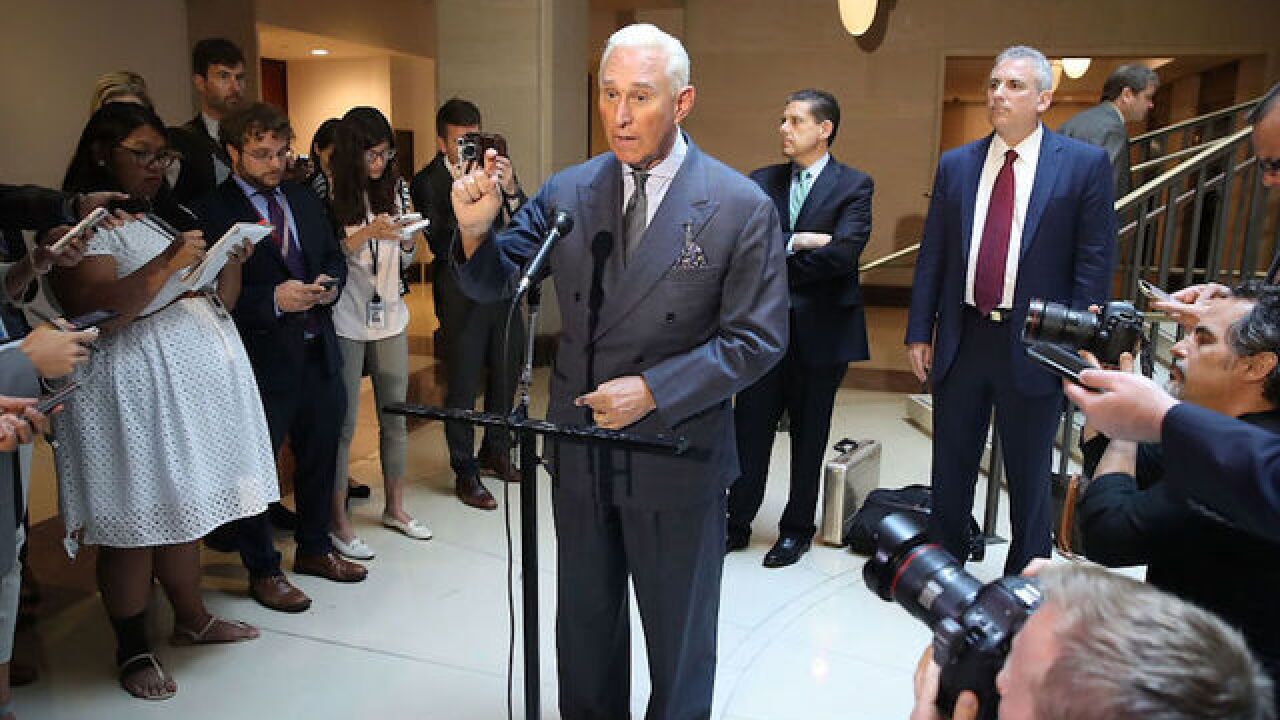 Image copyright 2017 Getty Images. All rights reserved. This material may not be published, broadcast, rewritten, or redistributed.
Mark Wilson
<p>Roger Stone, former confidant to President Trump speaks to the media after appearing before the House Intelligence Committee during a closed door hearing, September 26, 2017 in Washington, DC. </p>

Andrew Miller, a former associate of longtime Donald Trump confidant Roger Stone, did not appear for a scheduled grand jury hearing on Friday, defying a subpoena from special counsel Robert Mueller, according to his attorney.

Miller's attorney Paul Kamenar told CNN that they intend to appeal the order to appear before the grand jury, and he said the first step would be for him not to appear.

In a closed hearing Friday in a Washington, DC, district court, Judge Beryl Howell found Miller in contempt and then stayed that ruling until this Monday to allow for an appeal to be filed.

"Our next stop is the court of appeals," Kamenar told CNN on Friday. Asked how long he thinks the process will take, he said, "This may be expedited," but added, "it eventually would be headed to the Supreme Court for the final word on this."

Miller is one of a number of witnesses tied to Stone who have testified before the Mueller grand jury. Kristin Davis, who is also known as the "Manhattan Madam," is also scheduled to appear before the grand jury on Friday.

Stone has not been contacted by the special counsel's office, but he appears to be under investigation as part of the probe into Russian election interference and possible collusion between Trump's team and Russian officials.

Stone appears to be cited, though not by name, in the last month's special counsel indictment of 12 Russian intelligence officers for hacking the Democratic National Committee. Stone was not charged in the indictment.

Stone acknowledged that he was likely the unnamed US official in the indictment, which listed messages exchanged with Guccifer 2.0, the identity US investigators say was used by Russian hackers. Stone has argued that the messages he sent to Guccifer 2.0 were "benign" and were not evidence "of collaboration or collusion."

Miller was originally set to appear before the grand jury and turn over documents on May 18, but he did not appear on that date. He was subpoenaed again for June 8, and again he did not appear.

The court then told him he had to turn over "certain documents" by June 25 and appear before the grand jury June 29. That's when he filed his motion to fight the subpoenas.

A paragraph of the special counsel's argument that might explain his role in the investigation is redacted in the court filing.

Miller's fight against Mueller largely follows the same contours as Concord Management and Consulting's attempt to say Mueller's appointment is unconstitutional. The Russian company, which was accused by the special counsel of bankrolling a vast online campaign to influence the 2016 election, argued Mueller does not have the power he has used in the executive branch because he is not appointed by the President nor confirmed by the Senate.

"Here, the witness essentially argues that the Special Counsel wields too much power with too little accountability," Howell wrote in summarizing the case. "The witness raises legitimate questions, but his concerns are not legally sustainable. The scope of the Special Counsel's power falls well within the boundaries the Constitution permits, as the Special Counsel is supervised by an official who is himself accountable to the elected President."

On Friday, Kamenar told CNN that Miller has "already talk(ed) to two FBI agents several months ago," and "we supplied all the documents that they wanted."

He said, "We had to have one thing that he was refusing to do, namely go before the grand jury, in order for us to get the contempt and to appeal. So that's where we are on this."