A baby woke up from a coma and smiled at his dad. Now his family is raising money to save his life 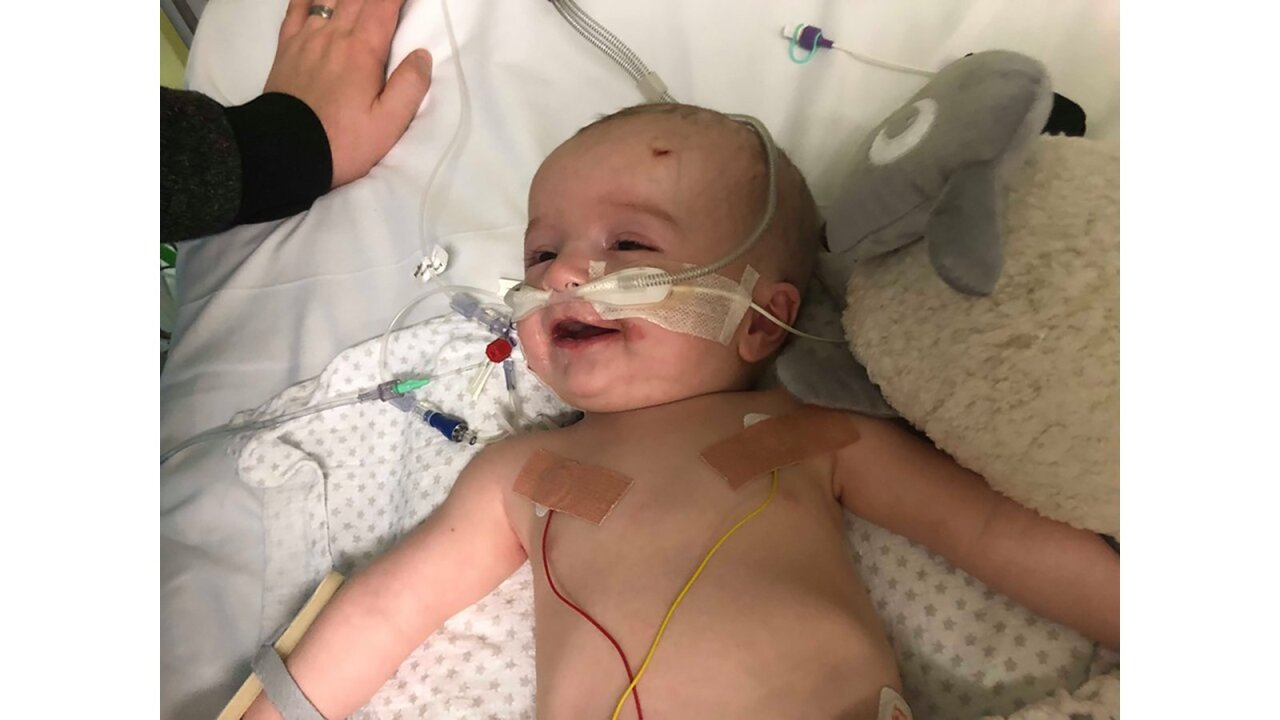 As 14-week-old baby Michael began to wake up from a five-day coma, he recognized his dad and smiled in the precious way that only babies can.

"It's a moment I will cherish with every inch of my heart," Emma Labuschagne, Michael's mother, told CNN. "To be really honest, it's got to be the happiest moment of my life. He is a living miracle, and we have never felt prouder of him."

Michael's parents, Emma and Stuart Labuschagne, said they were horrified when they found their baby had stopped breathing in the early hours of March 16.

Michael suffered a cardiac arrest in their home, and paramedics shocked him with a defibrillator and injected him with adrenaline to stabilize his heartbeat.

When they arrived at the hospital, doctors placed Michael into a medically induced coma to protect his brain from further damage.

He was diagnosed with a rare tumor

The Labuschagnes, who have two other sons and live in the United Kingdom, learned Michael has a cardiac fibroma -- a tumor that can block blood flow to a child's heart. Michael's tumor is 5 centimeters, or about 2 inches, wide. That's enormous compared to a baby's tiny heart, which is about the size of their fist.

Doctors told the family Michael's condition is so rare that no surgeon in the United Kingdom would have the expertise to remove his tumor.

Emma said the family was given two options: either wait in line for a heart transplant or find a surgeon outside the country.

That's when they found out about Boston Children's Hospital, a US facility whose Cardiac Tumor Program boasts a 100% survival rate over the past 10 years.

"We researched the hospital and specifically the cardiac surgeons, Dr. (Pedro) del Nido and Dr. (Tal) Geva," Emma told CNN. "They have a 100% success rate and an exceptional reputation. From this moment we knew that we had to try and make this journey."

The journey will not come cheap

Emma said the hospital quote for the surgery is about $147,000. This doesn't include other expenses such as travel, lost workdays and recovery costs.

The Labuschagnes say they are determined to give Michael the treatment he needs, no matter the cost.

"When we received a response from Boston confirming that he would be a good candidate for surgery, it did not matter what the cost was," said Emma. "We would pay any amount of money to save our child's life."

As soon as they received the estimate from the hospital, Emma started a GoFundMe account to raise funds for the surgery.

She said the response from the public has been overwhelming.

"We have had well-wishers and donations from all over the world!" she said. "We are unbelievably thankful!"

Michael has an internal defibrillator and pacemaker to support his heart. Emma told CNN his medication must be administered four times a day and often causes side effects such as stomachaches, diarrhea and skin sensitivity that prevents him from going out in the sun.

The family hopes to travel to the United States for the surgery in April. For now, they are enjoying their time with the baby and trying to juggle their lives with his medical needs.

"Looking at him, he is like any other baby," Emma said. "He is always smiling and grinning widely. His older brothers dote on him and he is a strong little character in our family. We are just so grateful for him, even with his medical troubles."