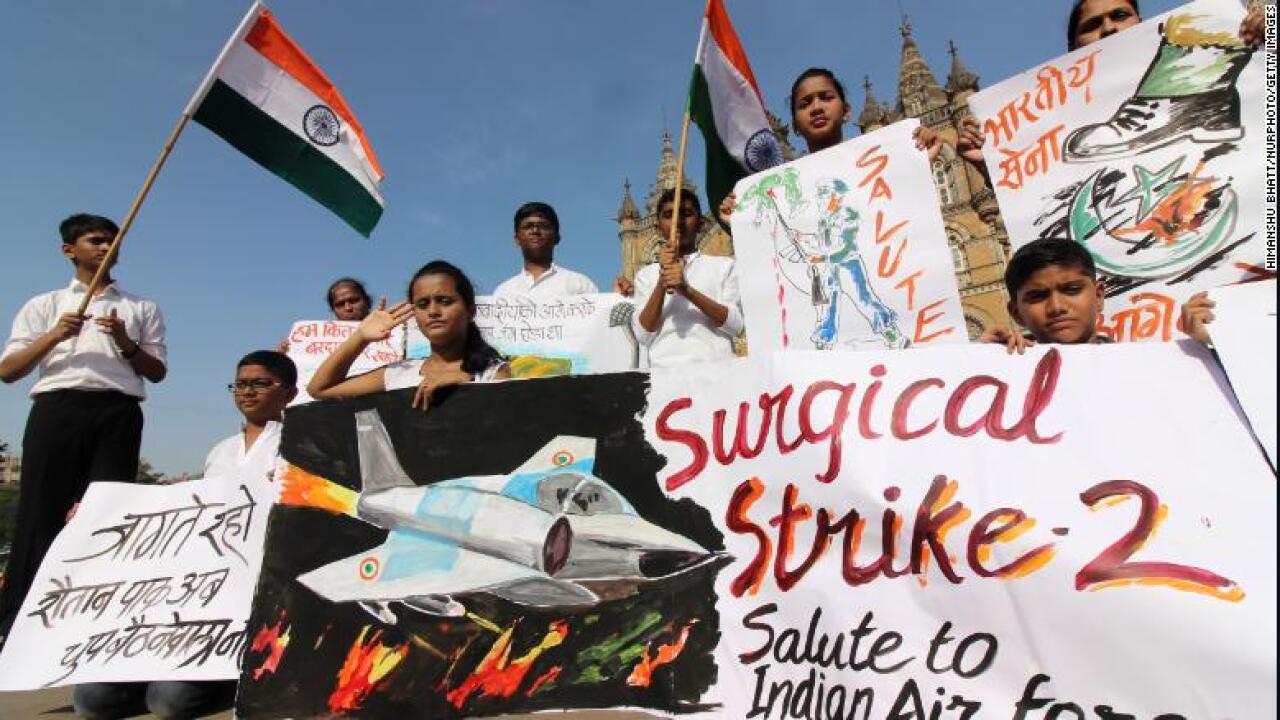 India has disputed Pakistan's claims that its air force shot down two Indian fighter jets inside Pakistani airspace on Wednesday amid a potentially dangerous border crisis between the two nuclear-armed powers.

The alleged incident comes a day after India said it launched airstrikes in Pakistan territory in the first such incursion by Indian Air Force planes since the India-Pakistan war of 1971.

Pakistan denied that the airstrikes took place, saying only that Indian jets crossed its de factor border with India in the disputed Kashmir region and that they were pushed back.

In a press conference Wednesday, the Indian foreign ministry said one of its Air Force pilots was missing after a plane was shot down in an aerial engagement with Pakistani military aircraft.

That account differs from Pakistan's version of events, though CNN could not independently verify Pakistan or India's claims.

Maj. Gen. Asif Ghafoor, Pakistan's chief military spokesperson, said in a tweet Wednesday that one Indian aircraft fell inside Pakistan-administered Kashmir, while another fell within the Indian-administered region of Kashmir.

Two Indian pilots have been arrested, Ghafoor later said, with one pilot said to be receiving treatment for injuries in a military hospital.

India did not say where its plane went down but a statement from Indian Foreign Ministry Spokesperson Raveesh Kumar, said an Indian Air Force plane (a MiG 21 Bison) shot down a Pakistani jet, which fell on the Pakistan side of the border.

Kumar said one of its pilots is missing and acknowledged that "Pakistan has claimed that he is in their custody."

"We are ascertaining the facts," he said.

The escalating tensions come at a politically crucial time for India, which is scheduled to hold national elections by the end of May.

Pakistan closed its airspace on Wednesday, according to the country's Civil Aviation Authority.

Flights to several Indian airports were also suspended, according to multiple Indian airlines on Twitter.

Earlier on Wednesday, Pakistan's Foreign Ministry said that Islamabad had carried out aerial strikes on "nonmilitary targets" across the line of control (LoC) from within Pakistani airspace, while accusing India of "carrying out acts of terror in Pakistan."

Pakistan said its strike was "not a retaliation" to the Indian operation and stressed that Pakistan struck "nonmilitary target, avoiding human loss and collateral damage."

According to the foreign ministry statement, the purpose of the strike was to demonstrate the country's self defense capabilities. "We have no intention of escalation, but are fully prepared to do so if forced into that paradigm. That is why we undertook the action with clear warning and in broad daylight," the statement said.

Pakistan Prime Minister Imran Khan had previously promised retaliation "at the time and place of Pakistan's choosing" and directed the country's armed forces to remain prepared for all eventualities in response to the Indian strikes.

'Not a military operation'

Kashmir, a largely mountainous region located between India and Pakistan, has been bitterly contested by both countries following partition in 1947, leading to three wars and numerous other skirmishes.

Skirmishes along the LoC have escalated since the alleged Indian airstrikes. On Tuesday, Pakistan troops opened fire at 15 places across the LoC in Jammu and Kashmir, injuring five Indian soldiers, army spokesperson Devender Anand told CNN.

Speaking at a foreign ministers meeting between Russia, India, and China in Wuzhen, China, on Wednesday, Swaraj said Tuesday's strike was "not a military operation" but "a preemptive strike against the terrorist infrastructure of Jaish-e-Mohammed."

India had previously said that Pakistan had a "direct hand" in the attack -- the deadliest on security forces since the beginning of the insurgency in the late 1980s. Pakistan has vehemently denied having a role in the incident.

Swaraj said that Tuesday's pre-dawn operation was launched because of the "continuing refusal of Pakistan to acknowledge and act against terror groups on its territory."

The military action was based on "credible information" that militants were planning other attacks in various parts of the country, Swaraj said.

The discrepancy between Delhi's account and what Pakistan is saying isn't novel.

Back in 2016, following an attack on an Indian military installation in Kashmir that India blamed on Pakistan-based gunmen, Delhi carried out what it called "surgical strikes" -- sending troops across the de facto border to hit terrorist targets.

Pakistan, however, denied that any such incursion had taken place, saying instead that there had only been an exchange of fire between the two sides.

In its Foreign Ministry statement Wednesday, Pakistan said that "India has been trying to establish what they call 'a new normal' a thinly veiled term for doing acts of aggression at whatever pretext they wish on a given day. If India is striking at so called terrorist backers without a shred of evidence, we also retain reciprocal rights to retaliate against elements that enjoy Indian patronage while carrying out acts of terror in Pakistan."

US Secretary of State Mike Pompeo spoke with his counterparts in India and Pakistan and urged both sides to "exercise restraint, and avoid escalation at any cost."

"I also encouraged both ministers to prioritize direct communication and avoid further military activity," he said Wednesday, in the first statement by the US government over the incident.

Harsh V Pant, a professor in international relations at King's College London, told CNN that for the past few decades the Indian government had chosen not to retaliate after terror attacks in Kashmir.

But India is now at a point where it is choosing to escalate the situation, adding that India's military action follows public anger over the attack.

China, which shares a border with both countries, called on Pakistan and India to "exercise restraint" after news of the airstrikes broke.

"Both India and Pakistan are important countries in South Asia," Chinese Foreign Ministry spokesperson Lu Kang said during a daily press briefing Tuesday. "We hope that both sides can exercise restraint, and take actions that can contribute to the region's stability and improve their mutual relationship, but not the opposite."