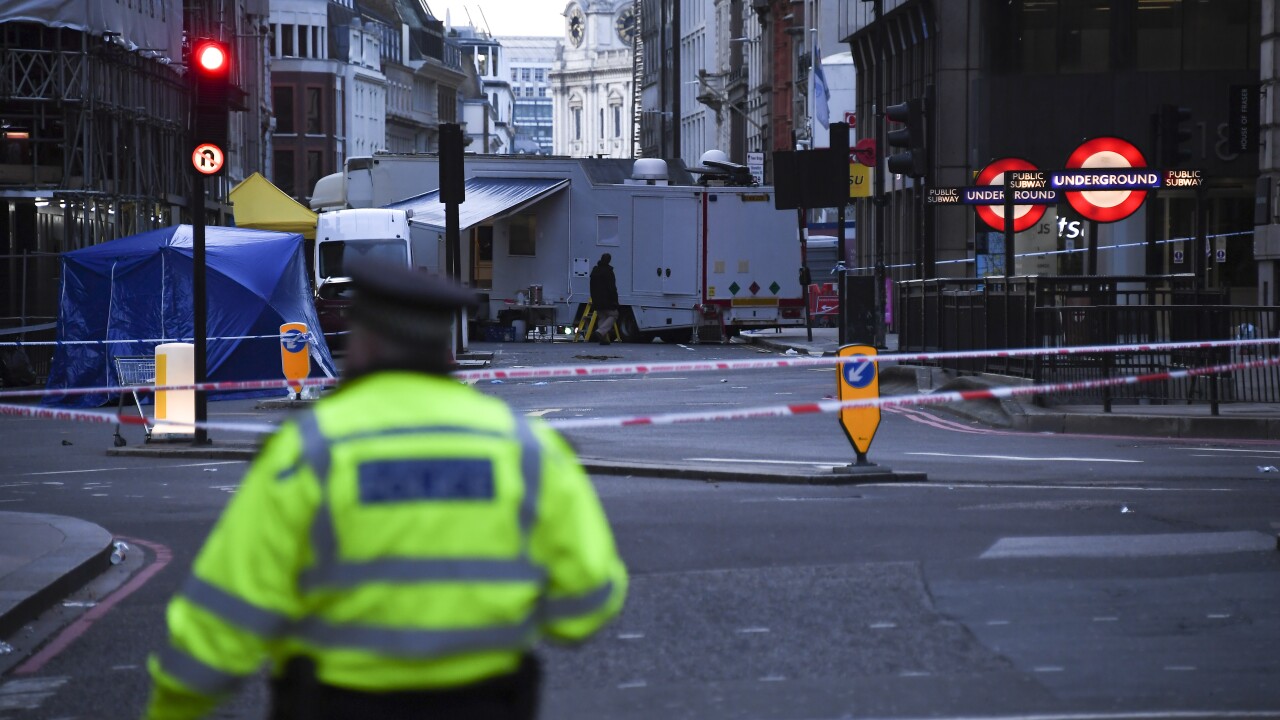 Bystanders took a stand against the London Bridge terror suspect Usman Khan, tackling him to the ground while wielding a fire extinguisher and an apparent narwhal tusk, as stories emerged of individual acts of bravery.

Dramatic videos of the attack show the heroic actions despite Khan -- who is suspected of killing two people in the terrorist attack -- wearing a fake bomb strapped to him.

In the standoff on the north side of London Bridge, the convicted terrorist was sprayed with liquid from the extinguisher, while the man wielding the long tusk prodded it in the direction of the attacker.

At least one of the several men who subdued the attacker was reported by British media as an ex-prisoner, who served time with Khan.

The group wrestled him to the ground in a video, and one of the bystanders appeared to have disarmed Khan of one of two knives he is believed to have strapped onto his hand. Armed police shot Khan dead after the bystanders had moved away.

"And I think what we should do is reflect on the fact that these people ignored all the advice they're given, which is to run away from danger, to look after your own safety. And instead ran towards danger to make sure others were safe. And I'm just so incredibly proud as the mayor, and I think all of us should be proud of our fellow citizens."

A man and woman were killed in the attack on Friday, police said. Three others, a man and two women, were injured and remained hospitalized. None of the victims have been named.

The attack began just before 2 p.m. at an event in Fishmonger's Hall, on the north side of London Bridge, organized by the University of Cambridge's Institute of Criminology .

The event, attended by Khan, was scheduled for alumni celebrating the five-year anniversary of the Learning Together Network. The group, a network of academics and criminal justice organizations, is affiliated with the University of Cambridge's Institute of Criminology, the website for the event said.

According to PA news agency, the 28-year-old had threatened to blow up the building just before 2 p.m. "We believe that the attack began inside before he left the building and proceeded onto London Bridge," Metropolitan Police Assistant Commissioner Neil Basu said.

Eyewitness Amy Coop tweeted about the incident, saying the man holding the tusk had taken it off the wall of the historic Fishmonger's Hall.

"A guy who was with us at Fishmongers Hall took a 5' narwhale tusk from the wall and went out to confront the attacker. You can see him standing over the man (with what looks like a white pole) in the video. We were trying to help victims inside but that man's a hero #LondonBridge," she wrote on Twitter .

The man is believed to work in the hall and "originally from Poland," the Times of London reported.

London Mayor Khan said a Londoner of Polish origin was among the group of people who intervened.

"We saw yesterday one example of the worst of humanity -- the actions of this terrorist," Sadiq Khan said. "But we saw many examples of the best of humanity. And when I say the best of us, I include EU citizens. And what we saw yesterday was ordinary citizens, including Londoners who are of Polish origin -- he's a Londoner -- who acted in an extraordinary way. And I'm pretty proud of him."

A maintenance worker who witnessed the attack told PA that he spoke to one of the men who helped wrestle the knifeman to the ground. "Some of the guys who were on top of him were ex-prisoners and they had all been in the Fishmongers' Hall," he told PA news agency. "The guy told me he was in prison with the attacker."

Tom Gray, a tour guide who tried to apprehend the suspect, told CNN affiliate ITV that the attacker was "wielding two knives, one was duct taped to his hand." After other bystanders had held the suspect down, Gray said he tried to "stamp the other knife from his wrist" and then kicked it further down the bridge.

Lloyd Griffiths, 35, who was on a bus on the bridge, said he saw the attacker had a large blade.

The standoff ended when armed police arrived. "Then police ran over with guns, screaming," before shooting the man, Griffiths added. Multiple emergency vehicles quickly arrived on the scene as crowds of people fled the area.

Before Friday's attack, Khan was residing in the Staffordshire area of England, about 150 miles northwest of London, authorities said.

Questions have emerged about his early release from prison last year with an ankle monitor.

Khan was among a group arrested in London over an "al Qaeda-inspired plot" to bomb the London Stock Exchange, UK police said at the time. He also had historical links to the controversial Islamist group Al-Muhajiroun (ALM), Whitehall sources told CNN.

He pled guilty to terrorism charges in 2012, but served under half of his 16 year sentence and was released in December 2018.

The sentencing judge called Khan and two others "more serious jihadis" than the rest of their group, adding that in his view they would remain a "significant risk" to the public, even after their sentence.

"In my judgment, these offenders would remain, even after a lengthy term of imprisonment, of such a significant risk that the public could not be adequately protected by their being managed on license in the community, subject to conditions, by reference to a preordained release date," the judge said during the sentencing.

In order to adequately protect "the safety of the public", the judge said Khan's release on license could only be "decided upon, at the earliest, at the conclusion of the minimum term" in prison, and imposed an indeterminate sentence on his release.

This means a Parole Board would have to decide on his release after a minimum of 8 years in prison. Khan appealed his sentence and in April 2013 his conviction was overturned from an indeterminate sentence -- which were abolished in 2012 -- to an extended determinate sentence.

An extended determinate sentence carries a fixed term and means you serve some of it in prison and the remainder in the community.

Britain's Parole Board said in a statement on Saturday that he appeared "to have been released automatically on license," without a parole hearing.

Police searches in Staffordshire continued through Saturday. According to PA Media, a police photographer and search teams entered a three-story block of flats near the town center on Saturday morning, while two uniformed officers were present at a cordon outside the building.

The UK government says it was looking at the sentences handed out to the most violent offenders, Home Office minister Brandon Lewis said in a TV interview with CNN affiliate ITN on Saturday.

"Are we issuing tough enough sentences for the most violent offenders? That's something we want to look at and we will do so as swiftly as we can," he said.